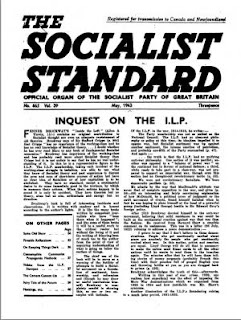 From the May 1943 issue of the Socialist Standard

In a speech at Aberdeen University, reported in The People (February 7th, 1943), Sir Stafford Cripps warned his audience that they must not let slip the present opportunity to plan for peace. Soon it will be too late, for ”certain interests are already massing their forces to fight the plans for a better Britain and a better world after the war.” This is not a reference to Hitler, but to "privilege and selfish interests” here in this country. Sir Stafford quoted the old saying, "The devil was sick, the devil a monk would be! The devil is well, the devil a monk is he!” but went on rather inconsistently to dismiss "facile explanations dealing with deceitfulness of politicians or the trickery of the ruling class.” He recalled that in November, 1918, Mr. Lloyd George talked of making Britain "a fit country for heroes to live in,” but already it was too late, "the time had already passed and the new spirit of common sacrifice was already being strangled by the old forces of internal difference which rapidly reared their heads once the danger was past.”

Rather appropriately, in a neighbouring column of The People, is a statement made by Mr. Winston Churchill that "the sun has now begun to shine . . . " Continuing Sir Stafford's reference to the sickness of the devil, it might be suggested that as he basks in the new sunshine the devil is already in the convalescent stage, with a corresponding diminution of the early war-time seal for repentance and reform.

It prompts the question why the Labour Party (and Sir Stafford, who opposes the Labour Party) did not strike while the devil was really sick, by securing explicit pledges from the Government as regards post-war legislation on parts of the Labour Party programme, as a condition of entering the Cabinet.

Sir Stafford offered a second reason why sincere reformers in the past have failed to overcome the opposing forces. It is that they "under-estimate the support they would win from the people. . . . for a bold programme of change.” He did not define in concrete terms what he would regard a "bold programme of change" but we know one—Socialism. Sir Stafford has often in the past affirmed his support for Socialism, but we notice that in May, 1942, when he addressed the Fabian Society and defended the electoral truce and National Government in war-time, he explained why the compromise nature of the Government made it obvious that "no fundamental changes of a revolutionary character could be expected, nor was it desirable that they should be pressed " (Evening Standard, May 30th, 1942.) If the Evening Standard account is correct (it was described as being received from "an old member" of the Fabian Society who was present). Sir Stafford then went on to urge a Continuation of the idea of National Government after the war. He pleaded for "a National Progressive Government," but added that this Government "should not insist on any 'ism."

Not insisting on any "ism" means keeping.the present "ism" (Capitalism) and not attempting to change over to Socialism. This comes oddly from one who has long professed to believe that Socialism is what is required, and who criticise others for not seeking popular support for a bold programme of change.