What The Labour Party Proposes After The War (1943) 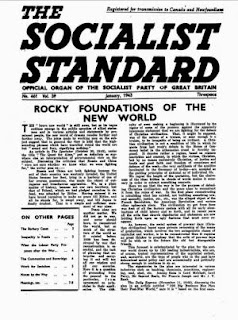 Editorial from the January 1943 issue of the Socialist Standard

Miss Ellen Wilkinson in a speech at Tooting on October 26, 1942, is reported by the Evening News to have said :—


You cannot expect to get a planned Socialist State the day after the armistice, tied up with pink ribbon, as a present from Mr. Winston Churchill.—(Evening News, October 27, 1942.)

Miss Wilkinson was stating the obvious, and it is to be doubted whether anyone in her audience needed such assurance; but if Mr. Winston Churchill, the Tory, cannot be expected to make us a present of Socialism, what of Miss Wilkinson and her Labour Party friends? Mr. Herbert Morrison, for example, has recently made two pronouncements on the world after the war. In a speech at Manchester he warned against abandoning war-time organisation and said that if we scrap sensible war-time planning


We shall be heading for muddle and disaster, and out of that may come anything, including Fascism.— (Manchester Guardian, September 26, 1942.)

In a later speech, at Swindon, on December 20, he sketched what form post-war control of industry might take.


Social control of production, however, might take many different forms. How much of it we wanted and in what forms could not be settled in terms of any political dogma. The sole test must be whether the public interest was served by such measures in particular cases or not. Some forms of economic activity would, like our postal and telegraphic communications, respond well to ownership and management by a department of State. But the public concern in this form was certainly not a universal panacea. Rather was it likely to be exceptional. What, for instance, should we do with our natural monopolies, industries which could not be carried on properly at all except on a monopoly basis? It might be that instead of leaving them in private hands . . . we should get better national service from them if we turned them into public corporations like the Central Electricity Board, the London Passenger Transport Board, or, in another sphere, the B.B.C.—(Times, December 21, 1942.)

He went on to suggest that other industries which are not natural monopolies though near-monopolies, such as the iron and steel and chemical industries, might be made into public corporations or put under "some form of management under a board of directors with a nationally nominated chairman."

So what sort of choice do Miss Wilkinson's Labour Party friends offer us? If capitalism is uncontrolled we shall have muddle and perhaps Fascism, and as a choice of alternatives we are to have supervised private monopolies or public corporations. Does Mr. Morrison believe that these forms (workable as a phase of capitalism though they may be) will prove satisfactory to the working class? They are forms of private ownership, and subject to all the stresses and strains inseparable from class divided society. Dividends for the investors will be their prime purpose, and they will be subject to the usual industrial conflicts with the workers employed by them. They will leave untouched the problem of converting private ownership into common ownership in the interest of the whole community.

The position is, then, that if Mr. Winston Churchill does not intend to give us Socialism neither does Mr. Morrison, and since there is no sign at present of the workers deciding to achieve Socialism for themselves we shall be left with capitalism even if it be agreed by Miss Wilkinson and others not to call it by that name but to label it "public control," or by some other fancy name.