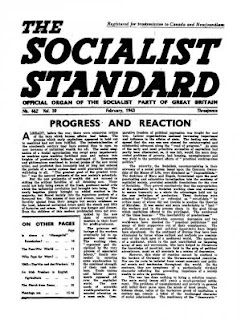 Editorial from the February 1943 issue of the Socialist Standard

Everybody knows that war is destructive, but not everybody has a clear idea who pays for it. War involves the destruction of existing wealth, and still more the concentration of effort on the production of war materials destined only for destruction. Sometimes the victor can make the vanquished pay, but the last war showed how difficult it is to collect the huge bill that arises from a world war.

Who pays for the war? Who bears the financial burden? There are answers in plenty. "We do," say the landlords, who see many of their rents stabilised at pre-war level, while prices rise and expenses mount. ” We do,” say the industrial and commercial shareholders, who see Excess Profits Tax draining away £400 million of their profits, while more hundreds of millions go in Income Tax. “We do,” say the workers, who have been brought within the reach of Income Tax for the first time, and who see all goods they buy dearer in greater or less degree. “ We do,” say the pensioners and investors on fixed incomes, who have the same income as before the war (less after deduction of income tax) while cost of living has risen. Even the soldiers who sacrifice life and limb may add that they also bear a financial burden in loss of earnings.

The Socialist answer to the question, surprising though it is to many workers, is that the financial burden of war, like the financial burden of taxation in peace-time, falls in the long run on the propertied class, not on the working class. Why this is so can be understood only when the working of the capitalist system of society is understood. The foundation of the capitalist system is the ownership by a comparatively small class of people of the land, the buildings on the land, the mines under the land, the factories and their machinery, the railways, road transport vehicles, aeroplanes, ships, hotels, dwelling houses, and so on. These things and the mass of raw materials and finished products in existence at any given moment are the property of the capitalist class, landed, industrial and financial. While the means of production and distribution are owned by the few, they are worked by the many, the working class. It is the labour of the workers applied to the raw material, that produces all the goods and maintains all the services on which the whole of the population depends.

At this point it is sometimes argued that, since the workers produce everything, do they not pay for everything? But the answer is, No. What the workers produce is wholly the property of their employers, and it is the propertied class as a whole that does the paying. The industrial capitalist, having sold the goods produced by the workers, uses the proceeds to pay for the cost of raw materials, for the workers' wages, for repairs and replacements of machinery, for rent, advertising, etc., etc. The industrial capitalist, after paying all his expenses, including his workers' wages, is the owner of the “surplus-value” produced for him by the workers, though he has to surrender part of this surplus value to the landed, financial and commercial capitalist. What the working class receive is the amount paid to them by their employers in the form of wages and salaries. The working class are sellers of the only commodity they possess, their labour-power, and the price at which they sell, though it varies from country to country, and from one class of work to another, is determined by the cost of maintenance of those workers and their dependents. If that cost— the workers' cost of living—rises, then, other things remaining unchanged, the level of wages rises, though more slowly, and if the cost of living falls, wages fall. These adjustments are a resultant of opposing forces, including the workers' resistance through their trade unions.

The Capitalists always, in peace as in war, strive to get as much surplus-value out of the working class as they can, which means as much as the circumstances permit. They take advantage of a fall in prices or a growth of unemployment to depress wages, but when the process is reversed they are normally unable to resist granting wage increases. They cannot, merely by wishing to do so, pass on the burden of taxation to the workers. Taxation is a burden that falls on them, though what each group tries to do is to pass on a larger share of the burden of taxation to their fellow property owners.

The burden of taxation, in peace or war, and in spite of superficial appearances to the contrary, falls in the long run on the propertied class. They can try various devices, such as mass propaganda and taxes on wages, and by permitting a rise in the cost of living, to escape the burden, but always in the last resort the problem is the simple one whether the workers can be forced or persuaded to accept a lower wage (or to work harder or longer for the same wage), or accept a wage increase that is less than the increase of the cost of living. The economic forces of the capitalist system always tend to operate more or less effectively in spite of efforts to dam them up.

The capitalist class may try to ease their burden of taxation by getting more work out of the workers or by forcing a lowering of the workers' standard of living, but even if the workers were willing or compelled, as they sometimes are, this process has its limits because the workers' efficiency suffers if excessive fatigue or under-nourishment are continued too long.

What has happened so far in this war? The cost of living has risen, weekly wage rates for a normal week have risen, and earnings have risen in most cases more than the rise of wage-rates owing to the working of longer hours and to the extended introduction of piece-work systems. At the same time the workers' increased earnings have been reduced by the increased effect of Income Tax, and savings have increased. Now according to the Oxford Institute of Statistics, the net effect of all these changes has been that the workers' earnings have increased by just about as much as the increase in the cost of living and the effect of the income tax. Without crediting such estimates with an undue amount of accuracy, since the subject is a difficult one to reduce to simple terms, sufficient is known of the general movement of wages, prices, etc., to see that the general tendency is unmistakeable. The capitalist class have not in the main been able to pass on to the working class their burden of taxation. What has been achieved at the workers' expense is that, in order to maintain something like a pre-war standard of living (so far as that can be done in face of the complete disappearance of many articles), the workers are working much longer hours and suffering the consequent additional wear and tear on health and vitality.

On the capitalist side war results in some redistribution among themselves. Some gain, others lose, and often it is the large concerns that gain at the expense of the small ones —but this is not peculiarly a feature of war but only a continuation of peace-time trends.

As it is of obvious importance that the workers should he guided, in their notions by an understating of capitalist finance and taxation, we propose to return to this subject and deal with various aspects of the problem in subsequent issues.
Posted by Imposs1904 at 5:06 PM