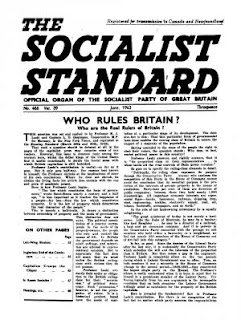 Film Review from the June 1943 issue of the Socialist Standard

The news cinemas are now showing a 15-minute “short" with the above title, based on a short story by the American prince of short story writers, O. Henry.

The dramatisation of a tiny commonplace incident in the everyday life of capitalist society, acted by two characters only, dwarfs into insignificance all the “colossal,“ "stupendous,' etc., etc., epics of the Hollywood dope works. Briefly, the story consists in the application by a desperately anxious unemployed man from Kansas, to his brother-in-law, the transport manager of an oil company in Texas, for a job. The job is vacant, because it is deadly dangerous; driving a truck-load of nitro-glycerine. "If a wheel hits a rock, there's no truck, no load, no driver any more." The pay is high, six dollars a run. The whole action of the film consists in the dialogue between the two men in the office of Tom, the foreman. Jesse (the unemployed man) begs, pleads and entreats. Tom is adamant. "Think of your wife and kids," says he, "go back home. I'll send you something." "Tom," says Jesse, "I am thinking of 'em. I've been on relief six years. My kids' bones are soft, they've got rickets because they've been fed on relief for six years." "But you won't last a month," rejoins Tom. "Even then," says Jesse, "I'll have made 600 dollars. I can get my wife and kids some clothes and shoes, maybe even some for myself." At last Tom gives in. "All right! report to-night for your first run." Jesse is overjoyed, thanks Tom with tears in his eyes, as he steps out into the sun, and remarks, "I guess I'm the happiest man in the world."

This is the sort of thing that takes places often in capitalist society, especially in the prosperous United States of America.

How farcical the chatter about "freedom from want" in a society based on a tiny minority giving the vast majority "jobs"—which the majority must have or starve. And how trifling the uneasy qualms of humanitarian pacifists about human life—in war time only. Working men are slaughtered every day in peace time for capitalist profits.

This short film, which exposes the misery created by capitalism like a lightning flash in a dark sky, is the prototype of what might be possible when the Socialist Party has sufficient resources to apply modern technical developments, like the cinema, to the task of Socialist propaganda.

Blogger's Note:
Sadly, I couldn't find the short film on YouTube, but I did find the text of the original short story on a Russian website. The bare bones of the story - as described by 'Horatio' in his review - suggests the short story might have been the inspiration for Clouzot's 'The Wages of Fear'.

It turns out that the original story was not by O. Henry but by Albert Maltz, an American Communist writer of that period. The story first appeared in the June 1938 issue of Harper's Magazine. It was an honest mistake by 'Horatio' (Harry Young) because the short story was in fact the recipient of the O. Henry Award for 1938. An award given out annually for outstanding short stories.
Posted by Imposs1904 at 7:42 AM