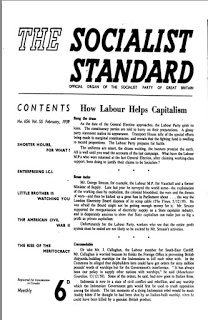 [The Trade Union Law of the People's Republic of China makes strikes illegal.]

“New China” is not a Socialist country. Despite the claims of the Chinese Communists that the working-class of China has achieved political power: is the leading class in the country; and that “New China” is “a people’s democratic dictatorship” (whatever that is supposed to mean), a Socialist society does not obtain there.

The Chinese Communists in their struggle for power have—following the “revolution” of Sun Yat Sen in 1911—completed the destruction of Feudalism, overthrown the War Lords and have driven the so-called Nationalist forces of Chiang Kai-shek from the mainland of China to the island of Formosa: and despite their claims to the contrary are building Capitalism—not Socialism—in the People’s Republic of China.

With this development of a bourgeois mode of production of a Capitalist industrial revolution; and with it a propertyless wage-earning class owning nothing but its labouring power; conflicts and disputes between Capital and Labour are bound to arise. And since the days of Sun Yet Sen, Chinese workers, often with the help of the Communists, have struggled to form Trade Unions in an attempt to improve their standards of living. Since coming to power in 1949 Mao Tse-tung’s Communist government has not abolished the Trade Unions; has not forbidden the workers to join them; but has, in fact, encouraged the “All-China Federation of Labour.” In fact, like all other “Communist” countries, the Trade Unions are now part of State apparatus—they are “company unions” writ large! This is borne out by The Trade Union Law of the People’s Republic of China; the Provisional Rules of Procedure for Settling Labour Disputes and Labour- Capital Consultative Councils in Private Enterprises (published by the Foreign Languages Press, Peking).

According to the Communists there are four classes in China today—the working class, the peasantry, the petty bourgeoisie and the national bourgeoisie; but only wage workers may join Trade Unions. “All manual and non-manual wage workers in enterprises, institutions and schools in Chinese territory whose wages constitute their sole or main means of livelihood, and all wage workers in irregular employment shall have the right to organise trade unions.” (Article 1 of the Trade Union Law of the People’s Republic of China). At the present moment the majority of China’s 600 million or so people are not yet wage workers. But in the cities more than half the population constitute wage earners and their dependants. For example, in 1951, about 400,000 of Peking’s 2,000,000 people were wage workers, and with their dependents, exceeded 1,200,000. In Shanghai about 3,200,000 of the population of over 6,000,000 in 1951, were wage workers and their dependants.

“Trade Unions in enterprises operated by the State or by cooperatives shall have the right to represent the workers and staff in taking part in administering production and in concluding collective agreements with the management.'’

"Trade Unions in private enterprises shall have the right to represent and staff members in conducting negotiations with the employers, in taking part in the labour-capital consultative councils and in concluding collective agreements with the employers.”

“It is the duty of Trade Unions to protect the interests of workers and staff members, to ensure that the managements or owners effectively carry out labour protection, labour insurance, wage standards, factory sanitation and safety measures as stipulated in the laws and decrees of the government, and other relevant regulations and directions, and to take measures for improving the material and cultural life of the workers and staff members."

"Trade Union organisations at all levels in enterprises operated by the State or by cooperatives shall have the right to ask the managements of the corresponding levels to submit reports on their work lo the trade union committees, to the general membership meetings or to representative conferences. They also have the right to represent the workers and staff members in taking part in administrative boards or administrative meetings at the corresponding levels.”

But they do not have the right to go on strike if their claims are not satisfactorily met!

Where a dispute arises between management and labour, and where one side or the other considers that the other party has violated the collective agreement, they may take their complaint to the Government’s Labour Bureau. If the complaint is taken to a local government Labour Bureau it may set up an investigation and mediation committee. If agreement is then reached by both sides, through the activities of the investigation committee of the Bureau, it will be signed by the representatives of both parties for registration. If mediation should fail, then the Labour Bureau will set up its own arbitration committee. And, in the words of Article 8 of the Provisional Rules of Procedure for Settling Labour Disputes, “The award rendered by the arbitration committee shall be signed by the representative of the Labour Bureau who presides over the committee, and after the award is approved by the Director of the Labour Bureau it shall be notified to both parties to the dispute which it must carry out.” Both parties must abide by any agreement reached. If either party does not agree it must inform the Labour Bureau within five days, and must lodge an appeal with the “People’s Court” for a final verdict. This is as far as the Trade Unions can go. No worker in Communist China may withdraw his labour-power under any circumstances. Strikes are forbidden. Article 11 is quite clear on this point:—

“After a dispute has broken out, both parties, during the period of consultation, mediation or arbitration, shall maintain the status quo in production. The management should not resort to a lock-out, suspend payment of wages, cease providing meals or take any other measures which lower workers' living conditions. Labour shall also maintain production and observe labour discipline. After arbitration by the Labour Bureau, even if one party disagrees and calls for settlement by the Court, the two parties shall nevertheless abide by the arbitration award pending the verdict of the Court.”

From The Trade Union Law of the People’s Republic of China it can be seen that the workers of “New China” are unable to organise in genuine Trade Unions; that they are not allowed to call strikes whatever their grievances may be, and that the so-called Trade Unions affiliated to the “All-China Federation of Labour” are Unions mainly in name only, similar to Hitler’s “Labour Front” in pre-war Germany. China’s “Trade Unions” are allowed to negotiate. But that is all. Their main functions, according to Article 9, of The Trade Union Law of the People’s Republic of China, are to organise the workers to support the laws of the government, carry out the policies of the government; to get the workers to adopt a new attitude towards labour—that is, to observe “labour discipline,” to organise “labour emulation campaigns and increase production to ensure the fulfilment of the production plans: to protect public property; to oppose corruption and bureaucracy and to fight “saboteurs” in enterprises operated by the State". In privately-owned enterprises the Trade Unions must help in developing production, “benefitting both labour and capital" — in other words, increasing the exploitation and subjection of the Chinese working-class. The outlook for the masses of China is indeed bleak.
Peter E. Newell.