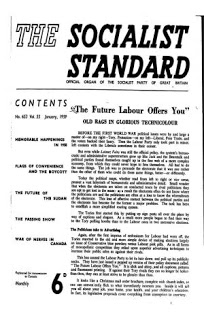 From the January 1959 issue of the Socialist Standard

A giant activity prevails in modern society, one that approaches people in their places of employment, stops them on street corners, enters their homes, reaches them through the mail and over the telephone, appeals to them from the press and pulpit and over radio and television, one that in fact overlooks no means of making its presence and its wants known.

This activity is carried on in the name of organised charity.

Society in its present form is widely regarded as the only acceptable form of society. Its educational establishments have no alternative to offer and will concede none, even though they recognise that modern society was itself an alternative to a previous form. Its public figures pour scorn on suggestions of change, even though the less ignorant among them will agree that change permeates all things. And the daily press and other agencies of publicity and information deliberately lie about the views of those who advocate change, even though there will be found on their masthead a resolute attachment for truth and progress.

Working people produce wealth that must, under the law, be delivered in its entirety to the owners of the places where the wealth is produced. In return, the producers receive sufficient of the needs of life to enable them to continue producing. This condition prevails through all the years they are capable of working. After that, the ones who are still living, if they qualify under certain government regulations, or if they have subscribed to certain plans, receive a pension entitling them to complete their “twilight years” under conditions of greatly aggravated want.

There are some released from industry who for one reason or another do not qualify for pensions. There are some who die or become maimed or suffer chronic ailments and have families. There are mothers, widows, children, limited in ability or opportunity to help themselves. There is a section of humanity that depends on the rest of humanity for help.

And the modern world, rather than deal simply and directly with this need by providing ready access to the storehouses of goods, as would occur in a sensible world, prefers instead to deliver the great mass of wealth to the privileged minority and tear-drenched appeals for charity to the impoverished majority.

Charity! Sweet charity! Upheld as evidence of the innate goodness of man! Bringing comfort to the bosom of the idle uplifter, salve to the conscience of the brutal exploiter! Providing an outlet for the energies of people who feel that something ought to be done and who might otherwise find time to think about doing things really helpful! Bringing relief to government funds and so, too, to the wealth of the owning class who provide these funds! Deepening the needs of workers by causing them to shoulder burdens of others more victimised by the rottenness of modern society! Degrading and humiliating those on whom it is bestowed, imposing itself on them as punishment for their sinful and contemptible failure to be useful beasts of burden! Hovering darkly over the mass of mankind, grim reminder of society’s benevolence towards all who falter in the field of exploitation!

Indecent, unwholesome charity! Preying on the natural willingness of ordinary people to help one another, even to the extent of depriving their own of needed things! Deliberately pursuing, hounding, intimidating, embarrassing those whose lives are already depressed, consciously designed to depress them further!

Charity! Symbol of a society insistent on preserving the extravagant extremes of wealth and want! Symbol of a society that neither intends nor desires to end the conditions that ensure its existence! Destined to remain and shame humanity as long as man clings to the property relationships of modern times!

The day will come when the human race will rise above its fawning subservience to an owning class. On that day the means of producing and distributing the needs of life will become the common property of collective man and will be operated for no purpose other than to provide abundance to all the members of society. On that day a Socialist society will be established, bringing an end at last to the exploitation of man by man, together with all the other abominations of Capitalism, including charity.
(Leaflet issued by Socialist Party of Canada.)
Posted by Imposs1904 at 2:03 PM