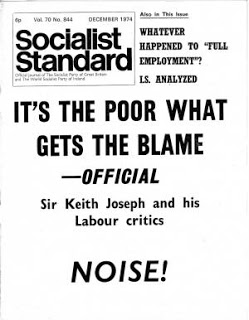 From the December 1974 issue of the Socialist Standard

The front of the Observer Review of Oct. 6 was headed To help readers make up their minds on how to vote on Thursday, we asked some prominent non-politicians how they will vote. The page was then devoted to the views of these famous people. As The Observer is regarded as the leading journal of the so-called quality press, and would naturally claim that its readers fail into the same top category, why on earth should they need this to help them make up their minds? Having lived in this world for some years, if they haven’t formed some view by Sunday, it would seem odd that they should be able to by the following Thursday with the help of these assorted names. In fact, the whole page should really be an insult to the intelligence of the readership. But I don’t doubt that the people who run the paper know better about that than I do.

So let’s have a look at advice from this bevy of intellectual beauties. First the only woman, the authoress Muriel Spark. (It goes without saying that in the following issue there was a whine: “Why only one woman?’’ On the face of it, I should have thought it clear that there was one woman too many.) Her advice was that as the Tories and Labour had both been useless in office (well, hear, hear ! so far anyway), she advocated voting for the Liberals to see what they would be like. This sage advice is about the level one can hear in any taproom. On this basis, if the third party was the Nazis, one must give them a chance to show what they can do too. I have never read any of her novels and on the strength of her political wisdom I shall keep it that way.

Professor Max Beloff, head of the Open University (you can’t get brainier than that), tells us to vote Conservative because he thinks the Labour Party is circumscribed by its relationship with the Unions. Well, no doubt it is, Prof. Well spotted. What about his Tories? Are their actions not circumscribed by something called capitalism? You think they have been free to organize the world so as to give us all a nice pleasant, secure and peaceful life? But why have they not given us that during all the years (well over a hundred) that they have held power since capitalism first blighted society? You yourself have lived through many periods of Tory rule and know how meaningless it has all been in relation to the little details like poverty, slums, unemployment, wars. You didn’t have to learn (or teach) about that in University. You were there. With such advisers, who needs ignoramuses?

Let us listen to an intellectual who is a nice chap and as thick as they come, Colin Cowdrey, the cricketer. Surprise surprise, he is going to vote for the Tories who will preserve “our heritage” and “produce the best sort of country for my children to grow up in”. Well played, sir. Well hit, indeed. You see Cowdrey’s kids are growing in the best sort of country for them. Because they chose a father who had one flash of inspiration better than all the brains. He married a millionaire’s daughter. Now that’s what I call sound advice — far better than voting Tory. But I fear Colin’s advice is not very practical for the millions of wage-slaves who read it (oh, yes; Observer readers might not like to be called wage-slaves. But nine out of ten of them are).

Let’s get back quick to a brainbox. John Osborne, who has done well as a playwright (for which he can largely thank the Observer, whose then Drama Critic, Ken Tynan, so boosted his “Look Back in Anger” that the thing couldn’t possibly miss). What does Osborne advise? Vote Labour. And he then goes on to castigate that party till in the end he says that it “has been largely responsible for the moral slum and squalid climate we have created since the heady days of 1945”. Vote more squalid slums! Vote for more intellectuals! They are obviously all round the twist, but if they are in the Observer . . .


Another Laborious type is James Cameron, the famous columnist. At the end of a famous career with the quantity press, he is interviewed in the Guardian and says (in language which is de rigueur for the trendy press nowadays) he would “give his knackers” to write for the Guardian. Presumably, Mr. Hetherington happened to be in need of a spare pair at that moment, for Cameron is now aboard the great leftist paper. He will vote Labour “as ever”. And does he really think Labour is so good? No: like Osborne, he votes Labour even though the only thing he says about it is that he “waited in vain for someone (his italics) in Government to resign over this year's H-Bomb Test while a splendid Health Service withers for lack of money”. Someone should tell Cameron that it was Attlee’s government which first started this country on the H-Bomb road. Because you can be sure he knows nothing about it. Too busy pompously advising others to have time to learn a damn thing himself.

Then we get a trendy-lefty Bishop, John Robinson. (You know, Honest to God.) “The one thing that unites me is getting shot of Heath and the Unfair Society.” He doesn’t tell us why he thinks we had a “fair society” under Attlee or Wilson (or what the devil he means by the term). And although he is contributing advice on how to vote, he does not tell us how he would vote himself but actually says that if the election had been on the 3rd instead of the 10th he would have voted differently! If you think I am pulling your leg and even a South Bank fake-socialist couldn’t utter such drivel, go to the library and see.

There is no room to deal with them all so just one more; yes, another Professor, the well-known Crick. What do you think the Professor’s subject is? Politics! Now there’s an expert for you. “My prediction is that I’ll vote Labour again, out of habit.” So on Sunday your actual Professor of Politics does not know how exactly he’s going to vote on Thursday; he can only predict. (Perhaps he had a bet with Ladbrokes on which way he was going to vote.) But, as he indicates, he is really a Labourite. He speaks thus of his Fuehrer: “A leader who has narrowed politics to the business of staying in office regardless, who has betrayed the country over Europe and who, in industrial relations, has become a past master of the pre-emptive cringe”. Which is worse or more lunatic: to vote for a leader because you are a starry-eyed nit who worships him, or to do so even though you know and say in print that he is an opportunist so-and-so?

Let’s squeeze in a reference to Kingsley Amis. He clearly hasn’t a clue and admits this. What he says is that all the parties are a lot of rubbish and he refuses to vote at all. Well, in a way that’s refreshing. He doesn’t understand. No doubt doesn’t care, either. Lucky Jim is all right, Jack. Which leaves one with a thought that has occurred before. The SPGB has always warned against workers following leaders, even if and when the leaders seemed people of some quality. Workers must do their own think. But how much more sensible does our advice appear when it is obvious that the famous names who monopolize the media and make sure that a Socialist voice is almost never heard, are such obvious nincompoops as these professors and bishops and all. Wake up, ye wage-slaves. You can’t possibly be as blind as the moronic specimens who lead you.
L. E. Weidberg
Posted by Imposs1904 at 8:54 PM

The illustrator 'Tony' may have been Tony Weidberg, the son of Laurie Weidberg.