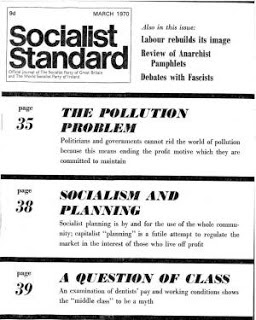 From the March 1970 issue of the Socialist Standard

Socialism cannot be established until and unless a majority of the class of wage and salary earners want and understand it. Most workers now support capitalism so the immediate task of socialists is to convince other workers that they are wrong to support capitalism and to persuade them that Socialism is the only solution to the problems they face. All that now prevents the establishment of Socialism is this lack of socialist understanding among the working class, and such understanding can only come about as a result of the successful propaganda activities of a socialist party. The best conditions for socialist propaganda and for the growth of socialist understanding is the limited political democracy of capitalism. This is the main reason why the Socialist Party of Great Britain has always stressed the importance both to the socialist movement and to the working class of the freedom to express ideas.

The classic statement of our case against the suppression of opinion appeared in the Socialist Standard in February 1941 in an editorial on the banning of the Daily Worker the previous month.


True to our basic principle we do not support suppression of opinion, however false we believe that opinion to be. We have always thought and always said that the activities of the Communist Party have been a continual menace to the Socialist movement and the interests of the workers . . . All the same the S.P.G.B. is opposed to suppression of opinion. In our view the way to counter any kind of propaganda, and in the long run the only way, is to meet it in the open in unfettered discussion. We are entitled to add that we practise what we preach and have always thrown open our platform to our opponents.

We stand by this today and still open our platform to all our opponents to state their case against Socialism. However, some of our opponents take exception to our debating other of our opponents. The ragbag of assorted trotskyists, maoists, castroists, etc, etc., known as “the left" have taken us to task for opposing in public debate racialist parties like the National Front and Mosley’s Union Movement. And not only do they criticise us for this, but they have tried to prevent us doing it.

Most of their arguments for doing this can be traced back to the mistaken theory of fascism concocted by the Comintern in the 1930’s in order to further the foreign interests of state capitalist Russia. In 1935 the Russian government began to work through the League of Nations for an alliance with Britain and France against Germany, Italy and Japan. The role the overseas “communist” parties were to play was to win support of workers in Britain and France for an alliance with Russia. This, however, had to be justified in pseudo-Marxist terms. Hence the theory that fascism served the interests of the “most reactionary” sections of finance capital. This paved the way for an alliance with “less reactionary” capitalist parties (and States) against the fascists.

The singling out of the fascists for special opposition using methods (like breaking up meetings and threats of physical violence) not used against other capitalist parties is thus a left-over from the pre-war foreign policy of the rulers of state capitalist Russia. It amounts to a policy of compromise with capitalism. It encourages illusions about ‘‘the lesser evil”, thus pointing to a policy of support for one capitalist party against another.

The analysis of what fascism was and how to combat it made by the Socialist Party of Great Britain was naturally different from that of the Russian government:


Fascism does not exist in the blue of the heavens: like every other social phenomenon, it is related to, and has its origin in, a social background. And that background is the democratic capitalism that “popular fronters” and other exponents of working class compromise with capitalism, wish to administer. That capitalism inevitably gives rise to working class problems has already been mentioned: but with equal inevitability it also gives rise to problems of a specifically capitalist nature, such as maintaining the profitability of production; securing new, and retaining old markets; the necessity of forging “national unity" when faced with war with rival capitalist groups, etc. And it is precisely in an attempt to solve these problems that the ruling class has recourse to Fascism. That these problems can be permanently solved is precluded by the nature of the capitalist system itself; but that will not prevent the capitalists from making the attempt where no other means will serve. Fascism, then, is a political form best adapted to meet the needs of certain contemporary capitalist states.

As long as the working class supports capitalism and capitalist policies, it will be tempted ultimately to give its support to that policy best calculated to meet the political and economic needs of capitalism—even though that policy may be fascist.

Democracy for the working class can only be consolidated and extended to the extent that the working class adopts a socialist standpoint. To renounce Socialism so that democracy may be defended, means ultimately the renunciation of both Socialism and democracy (Questions of the Day, 1942 edition).

The way to oppose fascism then was to continue to campaign for Socialism. To do otherwise, to abandon Socialist propaganda for mere anti-fascism, was dangerous for, as we pointed out, ‘‘provided the ‘fascist menace' is real, the formation of a bloc of non-socialist antifascists does not impede the advance of Fascism, but if anything, serves to expedite its progress".

Of course fascism is not a threat in Britain today, but if it were the policy of those who try to stop us putting up a socialist opposition to racialist and fascist parties would be helping it on. Besides, many of ‘‘the left” are themselves advocates and defenders of dictatorship ; they aim to seize power and set up a state capitalist dictatorship in Britain along the lines of those they support in Russia or China or Cuba or Yugoslavia or Algeria or Egypt, etc. etc. But even though they, like the fascists, are a threat to democracy we still say they should be allowed to express their obnoxious views and we are equally prepared to debate them as we are the National Front and the Union Movement.