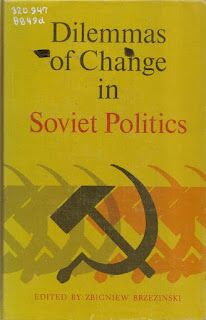 Book Review from the March 1970 issue of the Socialist Standard

This book is a collection of articles on the future of Russia’s political system that first appeared in the American propaganda magazine Problems of Communism.

The American government has discovered an effective propaganda weapon in using what can loosely be called Marxist ideas to criticise Russian society. Not that any of the contributors to this book would call themselves Marxists, but the method they apply — basically an economic interpretation of politics—is one which Marx pioneered.

Though none of them use the term "state capitalism” (which is a little surprising), all of them realise that Russia is not a classless society but one where a privileged group rule over the mass of the people.

The basic premise which all the contributors seem to share is that, as one of them puts it, "a modern economy can mature only in some sort of democratic political system”. Russia’s political system of totalitarian one-party rule has, they argue, got out of line with its modernised industrial system. Sooner or later political change must come; the question is how? Will the ruling party be able to reform itself so that it becomes a forum for conflicting ideas and interest groups? Or will it be overthrown in a popular uprising or a military coup?

Making predictions about Russia’s future has always been risky, but one thing is certain: capitalism will continue there in one form or another until the workers organise to convert the means of production from the class monopoly of a privileged few into the common property of the whole community.