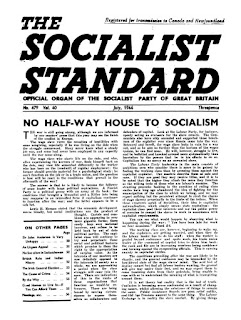 From the July 1944 issue of the Socialist Standard

The war is still going strong, although we are informed by our musters’ press that this year may see the finish of the conflict in Europe.

The wage slave views the cessation of hostilities with some misgiving, especially if he was living on the dole when the struggle commenced. Many never knew what a steady job was, and some had never been employed in any capacity until the war came along.

The wage slave who starts life on the dole, and who, after experiencing the horrors of war, finds himself back on the dole, may view life somewhat differently to the worker who has been on the treadmill of regular employment: the former should provide material for a psychological study; he can’t function on the job or in a trade union, and the question is how will he react to the conditions that prevail in the aftermath of the war?

The answer is that he is likely to become the follower of some leader with large political aspirations. A Fascist Party is a political group with an army at its back: the conditions that brought a Mussolini and a Hitler into being may reappear in an intensified form if capitalism continues to function after the war: and the latter appears to be a safe bet.

Lewis H. Morgan stated that the economic development moves blindly, but social institutions are the product of thought. Cartels and combines are appearing in ever more gigantic forms; these easily leap over national barriers, and refuse to be held hack by out of date political parties. The capitalist class will continue to try and perpetuate those social and political features which promise to them the right to the appropriation of surplus value. As the interests of our masters are now definitely opposed to the interests of society as a whole, we are approaching a period when the class struggle will come into the open. There are indications of this in the ranks of those organisations that function as would-be reformers. These are being forced by moving circumstances to expose themselves as collaborators and defenders of capital. Look at the Labour Party, for instance, openly acting as overseers for the slave owners. The Communists also have ably seconded and supported these henchmen of the exploiter ever since Russia came into the war. Betrayed and bereft, the wage slave looks in vain for a way out, and as he sees no further than the horizon of the wages system, he can find none. He will, however, struggle to live, and be buffeted and knocked around more systematically than heretofore by the powers that be in his efforts to do so. Capitalism has no mercy on an unwanted slave.

The Labour Party leadership in the main consists of ambitions men who consider there is more to be gained by fooling the working class than by arousing them against the capitalist exploiter. Our masters describe them as safe and sane. If they are good they may receive titles, and it is to be noted that the higher they climb the more they function as the willing tools of those who are labour’s enemies. The strutting peacocks basking in the sunshine of ruling class smiles have long ago abandoned the idea of fighting for the emancipation of the class to which we belong, and we may expect nothing but the persistent attempt to rivet the chains of wage slavery perpetually to the limbs of the toilers. When these creatures speak of Socialism, their idea is capitalist nationalisation, which simply means state capitalism: the capitalist class pool their interests and use the public power of coercion to compel the slaves to work in accordance with capitalist requirements.

You can see what would happen by observing what is happening during the war: “You have been late for work on four occasions.” Fined £4.

The working class are, however, beginning to wake up, and the exploiters are getting worried, and when they do the labour leader has to do his stuff: when the worker is doaded beyond endurance and quits work, his trade union leader at the command of capital tries to drive him back: the rank and file are in increasing numbers losing confidence and turning against the co-operating officials. This is causing anxiety in capitalist circles.

The conditions prevailing after the war are likely to be chaotic, and the general confusion may be intensified by the bewildered state of the wage slaves’ mind. The acid test of destiny cannot but find all labour leaders wanting, the ground will give way under their feet, and we may expect them to come tumbling down from their pedestals, being unable to cope with or to understand the meaning of what is transpiring around them.

It is not theory but reality that is the test of truth. Confusion is becoming worse confounded as a result of changing names, whilst allowing the substance of things to remain the same. Public Assistance Boards are poor relief outfits, and Old Age Pensions amount to the same thing. The Labour Exchange is in reality the slave market. By giving things names that denote their real meaning we quicken the intelligence. of our class. We explain the situation as it really is and do not get entangled in ruling class verbiage. Our appeal is to the proletariat, the propertyless class; they understand us best when we express ourselves in terms similar to those they use when on the job. The be-all and end-all of propaganda is to translate into everyday wage slave language the economics of the present system and the necessity for Socialism.

The Socialist tries to get his non-Socialist workmates to perceive that until the means of wealth production are made common property and a system of production solely for use is established, their lot will be that of wage slaves, receiving in exchange for the use of their labour power food, clothing and shelter of a quality and quantity barely sufficient to regenerate in their bodies the energy that is taken out of them when on the jobs.

In other words, the body of the wage slave functions as a mechanism for producing energy for the ruling class to exploit. The labour power of the worker sells at the cost of its reproduction.

The source of all surplus value is living labour. The capitalist instinctively realises this: so does the politician and the priest. The worker is the goose that lays the golden eggs. As the wealth he produces is taken from him practically as fast as it is brought into being, he fails to grasp the facts underlying the real position. He knows his wages are nicely adjusted to what he can live and work upon, but he is fooled by the money trick into believing he is paid for his labour.

The capitalist class use the means of wealth production, the land, factories, railways, mines, etc. us a means of corraling the real thing—the slave.

The slave is the only form of property that brings to the owner a revenue—something for nothing. When the ruling class quarrel amongst themselves, the wage slaves are torn from productive industry and made to engage in war, the industry of destruction.

The workers in different camps are pitted against one another. They re-echo their masters’ slogans of democracy and liberty, but no matter what the result of the conflict may be, the rulers will never sacrifice their right to appropriate unto themselves all the worker produces over and above what is necessary to sustain him. What the capitalist means by liberty and democracy is the full and free opportunity to exploit labour for profit, and those who stand for less than the abolition of the wages system are on the side of labour’s enemies, though they may know it not.

The reforms of the reformers never deal with the source of the trouble: the wealth of the ruling class has not been made less as a result of the activities of those who believe in the inevitability of gradualness, neither has the relative position of master and slave changed. The wealth of the ruling class in normal times steadily increases, and that of the worker becomes relatively less.

Put not your trust in leaders! The Socialist calls upon the worker himself to put an end to the present deplorable state of things. Instead of relying upon others, he must tackle the job on his own. There is nothing to prevent the working class democratically getting hold of the political machinery through the vote. Against the united advance of the working class the capitalist class are absolutely helpless. The interests of the working class are identical on tho class field—the political field. The issue between the wage slaves and their masters is one of ownership.

Shall the means of life become common property, or shall they continue to remain the exclusive property of the master class.

When the change is effected that history decrees must be, mankind will open a new page in its development.

The coming of Socialism will lift human society to a higher plane than it has occupied heretofore: then and then only will man be free in the real sense of the term.

Until the means of life are made common property, no power ou earth can take labour power out of the category of commodities: there it is fixed by the economic laws of capitalism, and all the pious resolutions of the I.L.O. cannot alter that fundamental fact, therefore the worker must establish Socialism or perish in capitalist slavery. There is no half-way house.