The Evolution of Sir Stafford Cripps, The "Revolutionary" (1944) 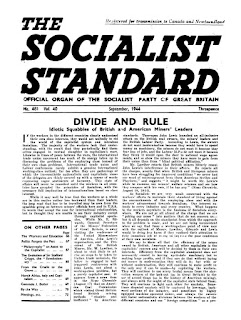 Editorial from the September 1944 issue of the Socialist Standard

Socialists are not concerned about the career of Sir Stafford Cripps and his success in the world of capitalist politics. There is, however, a value in observing the evolution of his political ideas because he represents a type with which Socialists have long been familiar. Forty years ago, when the S.P.G.B. first laid it down that Socialism could never be brought about except by the conscious act of a Socialist majority, this principle was criticised by all the reformists because it meant, they said, long postponement of the emancipation of the working class. There were quicker ways, we were told, and the Socialist Party year after year has had to show the fallacy of the advocates of short cuts to Socialism, whether they were preaching the general strike, the seizure of power by a minority, or the formation of Labour Governments which would introduce so-called "revolutionary" reforms to speed us on the way. Nothing daunted by a succession of past failures, there are always new men coming along to preach the same doctrine. Always, as they make their spectacular way, their career takes the same general course. First they denounce the slowness of the S.P.G.B. and demand action to get "Socialism now"; then they climb to high office in the Labour movement or the capitalist State, only to find that they cannot deliver the goods: then they fall back into the ranks of those who accept capitalism and merely advocate the petty reforms that have always been the stock-in-trade of the capitalist parties. Ten years ago Cripps was in full and furious fight. He was in a hurry. Everyone else was holding back the Socialist triumph. He attacked them all and gained the reputation of being the hundred per cent. revolutionary. He declared he wanted Socialism now and nothing but Socialism. He had no time for compromise and compromisers, and no time for the S.P.G.B. view that the laborious task had first to be carried out of making Socialists. Attacking the Labour Party, he declared in his pamphlet “The Choice for Britain," “ We must . . . firmly and definitely abandon any idea of working in association with any other political group or party that denies the absolute necessity of Socialism." In particular, he rejected as dangerous the idea that some temporary alliance of pro-democratic forces should be brought about not based on the achievement of Socialism." 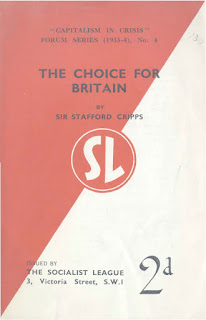 From then till now is not a very long period, but long enough for Sir Stafford to have abandoned most of his ideas. As a member of a Coalition Government facing the problem of post-war reconstruction he now quite frankly accepts the fact that capitalism will continue after the war, and that reconstruction will be strictly within the limits imposed by capitalism. In a speech at Belfast (reported in the Times, August 19, ), 1944), he forecast a fall in the standard of living after the war “unless we could get back all our pre-war export trade and add something like another 50 per cent. pretty quickly . . . " This, though he may have forgotten the fact, has been in the line of Conservative and Liberal propaganda for upwards of a century, as also was his further plea for increased efficiency. Finally, he let the cat out of the bag entirely when he admitted that it is to be the same old capitalism—"we shall embark upon the solution of our post-war difficulties largely under the aegis of private enterprise in this country, and that system will have to justify its own continuance by showing that it has the enterprise to meet the new circumstances and to overcome them."

This last pronouncement about capitalism justifying its continued existence comes strangely from one who ten years ago was proclaiming from the housetop that capitalism had long proved its own failure and unfitness to survive. In the same speech Sir Stafford thought that this country might fail to handle post-war problems satisfactorily “because of our innate conservatism.” "What was good enough for my father is good enough for me" is, he said, a “fatal slogan for industry."

The only serious conservatism from which the workers suffer is their habit of clinging to capitalism when Socialism is within their reach if they would have it, and Sir Stafford Cripps, who is now saying in effect, “Capitalism which was good enough for my father is good enough for me," is aiding the capitalist class to keep the workers conservative.

In the post-war years there will be many more self styled saviours of the working class seeking votes and support, shouting urgently for speedy action while they are climbing and then, when they have arrived, imploring the workers to go slow and be content with capitalism. These men are the successors of a long line stretching back to the earliest days of the reformist movement. No matter what their good intentions may be, they will not and cannot do anything for the emancipation of the working class.

"From then till now is not a very long period, but long enough for Sir Stafford to have abandoned most of his ideas. As a member of a Coalition Government facing the problem of post-war reconstruction he now quite frankly accepts the fact that capitalism will continue after the war, and that reconstruction will be strictly within the limits imposed by capitalism."

Cripps was the Labour Government's "Austerity Chancellor" from 1947-1950. Nuff said!