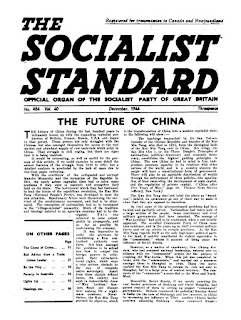 From the December 1944 issue of the Socialist Standard

The history of China during the last hundred years is intimately bound up with the expanding capitalist production of Britain, France, Russia, U.S.A. and Japan in that period. These powers not only struggled with the Chinese, but also amongst themselves for access to the vast market and abundant supply of raw materials which exist in China. That struggle is still raging, but there are signs that it is being resolved.

It would be interesting, as well as useful for the purpose of this article, if we could examine in some detail the salient features of the struggle from 1842 to 1921, but a detailed analysis is precluded by the lack of space due to war-time paper rationing.

With the overthrow of the antiquated and corrupt Manchu Monarchy and the formation of the Republic in 1911, the newly arisen capitalist class had to solve many problems if they were to maintain and strengthen their hold on the State. The instrument which they had fashioned to lead the forces of the republican revolution, the Kuo Min Tang (National People’s Party), was developed to meet the new situation. Reactionary forces were threatening the survival of the revolutionary movement, and had to be eliminated. The conception of nationalism had to be inculcated in the “village-minded” peasantry. Much of the tradition and ideology natural to an agrarian economy had to be dissipated. This was achieved to some extent, partly by propaganda, and as far as possible by modernising the economy.

It was imperative to unify the provinces by establishing a firm centralised authority over them. Not least amongst the problems to be solved was how to compel the foreign powers to relinquish their extra-territorial rights, which were a very serious obstacle in the way of complete native sovereignty. Apart from these sharply defined issues, the country was sunk in indescribable chaos—“War Lordism,” famines, floods and disease were making life a nightmare existence. Nevertheless, the Kuo Min Tang pursued its objective, which is the transformation of China into a modern capitalist state, as the following will show :—

The teachings bequeathed by Dr. Sun Yat-sen, founder of the Chinese Republic and founder of the Kuo Mill Tang, who died in 1925, form the ideological basis of the Kuo Min Tang rule in China. His trilogy, the San Min Clin I, or the Three People’s Principles of nationalism, political democracy and economic democracy, constitutes the highest guiding principles in China. The new China he had in mind is free, independent, possesses equality in its relations with other nations of the world, and is a country wherein the people will have a constitutional form of government. There will also be an equitable distribution of wealth through the enforcement of three policies—the equalisation of land ownership, the development of state capital, and the regulation of private capital. (“China after Five Years of War,’’ page 30. Chinese News Service (official). New York.)

The Kuo Min Tang does not label the above as “Socialism”; indeed, its spokesmen go out of their way to make it clear that they are opposed to Socialism.

By 1921 some of the aforementioned problems had been tackled and partially solved. Nationalism had taken hold of a large section of the people. Some reactionary and rival military governments had been smashed. The scourge of “War-Lordism” had still to be eradicated, when a new trouble appeared. The so-called Communist Party of China came into existence, and in the years up to 1927 recruited military forces and set up soviets in certain provinces. As the Kuo Min Tang regards itself as the only legitimate political party in the land, it quickly manifested its violent opposition to the "communists,'' whom it accused of being under the influence of Soviet Russia.

However, as a matter of expediency, Gen. Chiang Kai shek, who had assumed national leadership, entered into an alliance with the “communist” armies for the purpose of crushing the War-Lords. When this job was completed, he broke with the “communists,” and carried out a massacre amongst them in Shanghai in 1928. These two moves enabled the Kuo Min Tang to extend its rule not only to Shanghai, but to a large area of central territory. The remnants of the “communist” armies fled to (he West and North-West.

Meanwhile, Soviet Russia, if not openly annexing the vast border provinces of Sinkiang and Outer Mongolia, had gained control of them by setting up puppet “communist” governments. Britain countered the potential Russian threat to India (in the case of Sinkiang) and her interests in China by increasing her influence in Tibet, another Chinese border province adjoining Sinkiang. Japan countered Russia move by establishing a puppet regime in Inner Mongolia, and invading Manchuria in 1931 for the additional purpose of preparing a springboard for the invasion of China proper.

Britain and the U.S.A. (to say nothing of the minor powers which possess interests in China) were uneasy at the growing menace to their extensive interests by the Japanese and Russian encroachments. But they were not agreed how to deal with the menace.

The Kuo Min Tang was in no position to offer successful resistance to the Japanese annexation of Manchuria, so its attention was again focussed on the “communist” controlled provinces. After a series of sanguinary campaigns lasting until 1934, the “communists” were finally driven to the north-west of the country, and the Kuo Min Tang settled down to developing economic resources. A blockade of the so-called “Soviet Republic of China” was instituted by the National army pending an opportunity to smash it.

Japan struck again in July, 1937, with the object of “beating China to her knees.” In September of the same year, the Communist Party of China rallied to the support of the Kuo Min Tang government: —

. . . on September 22nd the Chinese Communist Party issued a formal declaration wherein it pledged to fight for the realisation of Dr. Sun’s principles, to abandon its policy of insurrections which formerly were aimed at the overthrow of the Kuo Min Tang's political power, to abandon its policy of land confiscation and subversive propaganda, to abolish the system of soviet government, to reorganise the Red Army and to place it under the unified command of the National Military Council.

Gen. Cbiang Kai-shek accepted this pledge, and expressed the hope that the “communists” would abide by it.

The unity in the years which followed has been more apparent than real. In its issue dated May 1st, 1944, Life magazine summarises the attitude of the Kuo Min Tang to the Communists and vice-versa :—

The case of the Nationalists against the Communists is explicit. They claim that unity comes before all else, that the nation cannot be strong nor its army powerful if there are two governments independent of each other, two armies under independent command, if the Communists make their own laws, print their own currency and give no obedience to central authority.
The Communists on the other hand, claim that so long as they receive no supplies from the central government they need give it no allegiance. They claim that they cannot yield up their independence of action for a share in the Nationalist state unless it is a democratic state in which they have freedom of speech, assembly and press. Were they to give up their armies and their independent areas and submit themselves to the present governing group, they would be wiped out as a political entity and many would lose their lives. (Page 109, “Life Looks at China.”)

It is amusing to observe the communists’ concern for democracy: like the Kuo Min Tang, they would not tolerate the existence of Socialists or any other political group in their midst.

The Chinese Government is very touchy on the subject of national unity: it is afraid lest its Allies take advantage of any weakness resulting from a cleavage, hence the heavy censorship imposed on news of communist activities. Although the Chinese Government has never renounced its claim to sovereignty over Russian controlled Sunkiang and Outer Mongolia, it has to exercise restraint over this question, because of the presence of the powerful “communist” armies in other parts of China. Moreover, Russia might cease trading vital war materials with the Chinese. Russia, no less than Britain and the U.S.A., is deeply involved in the sordid game of power politics.

A hint of what may well be the official U.S.A. attitude towards Russian aspirations in China is given in the editorial of Life (August 1st, 1944):—

For half a century U.S. policy in Asia has stood soundly for a strong China. . . .
The U.S. needs and wants China as her firm friend in Asia. Why? Not for military security alone; for that purpose, friendship with Russia would suffice, or even an alliance with Japan. (Our italics.) We need China because she is a great potential force for freedom and democracy in Asia. If China should cease to be that, and go the way Japan went, we could not long stay friends.
The longest border in the world is that between China and Russia. In view of the mounting tension between the Kuo Min Tang and the Chinese Communists, this border may be the world's most dangerous spot after the defeat of Japan. If the geopolitical interests Of Russia and the U.S. must clash anywhere (which they must not), it may be on that border. The nature of our post-war relations with China may therefore be a matter of peace or war for the U.S.

Notwithstanding the passing reference to “freedom and democracy” in the above quotation, could there be anything more revealing of the true nature of the struggle in the East?

Within the narrow limits of an article, we have tried to indicate the trend of China's development, which is often obscured by the maelstrom of international power politics.

Workers throughout the world are becoming increasingly interested in China, but their sympathies are not always identical. Some regard the Kuo Min Tang Government as “progressive,” inasmuch that it professes its intention to establish democracy and raise the standard of life of the people. Others support the “communist-soviet” regime and hope that it will succeed in sovietising all China. Neither of these attitudes is in the interests of the common people of China or the rest of the world. Whichever regime emerges, the masses will be enslaved to some form of capitalism.

Therefore Socialists are hostile to all the rival contenders for power in China. Our sympathies are whole-heartedly with the common people, who for decades have endured horror upon horror. Is there a way to put an end to their sufferings? There surely is. The workers of all lands—especially in Britain, U.S.A., Canada, Germany, and other advanced industrialised countries—must resolve to do away with capitalism and establish in its place international Socialism. The Socialist Party and its companion parties abroad are playing their part by helping the workers to get hold of Socialist knowledge—the pre-requisite for this task. Once established in the advanced areas, Socialism would quickly bring countries like China into line. The masses of China would not be slow to realise the incomparable advantages of common ownership and democratic control of the means of life.

The international working class will triumph in the end: meanwhile, let us redouble our efforts to bring the end nearer.
H. G. Holt
Posted by Imposs1904 at 11:58 AM