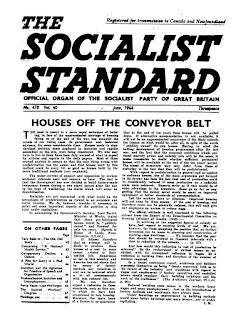 From the June 1944 issue of the Socialist Standard

An organisation calling itself the "Scottish Workers' Congress" called a preliminary meeting at Central Halls, Glasgow, on May 21st. What took place at the meeting we do not know at the time of going to press, but, judging from the explanatory leaflet issued beforehand, it is a curious re-hash of reformism, Scottish nationalism and anti-political activity. The 10-point programme contains some of the stock demands of the reformist parties, such as a minimum wage of 3s. an hour, a 30-hour week, double income-tax allowances on all incomes under £600 a year, immediate provision of sufficient decent houses "by prefabrication and other means in Scotland" (our italics), “democratic workers' control of Scottish industry," and “equal pay for the job for both men and women."

Although the leaflet appeals to "all workers to speak and act directly for themselves" (our italics), the 10 points are directed to Scotland and Scotland only, and among them are such points as "an end to the closing down and shifting south of our industry " (our italics).

On its political attitude the leaflet says only that “the Committee is non-sectarian and non-party," and its task "cannot be undertaken by any of the existing organisations. They exist for other purposes."

How it proposes to achieve its aims is not very clearly indicated, though as it apparently rejects political action, and as point 5 wants the factory committee to "take over the workshop where closing down is threatened," we may assume that the Committee intends that the workers shall take "direct action," thus reviving once more the old delusion that working-class political action is unnecessary.

As the 10 points imply the retention of the wages system and minor modifications of the income tax, it is obvious that the Committee does not aim at the abolition of capitalism and the institution of Socialism; which is, of course, made unmistakeable by the narrow nationalist point of view that stands out in all the 10 points.

How thorough-going is the Committee's acceptance of capitalism can be seen from the points relating to minimum wages and to the income tax. It seeks to raise “the standard of living”—but not too much; for not only does the point about income tax envisage some people having more than £600 a year and some having less, but the minimum wage of 3s. an hour for a 30-hour week only means a minimum wage of £4 10s., or £235 a year.

We await further details of this curious organisation.
Editorial Committee.

The only reference I can find to the "Scottish Workers' Congress" is a brief mention of them in Wildcat's excellent 1986 pamphlet on the Anti-Parliamentary Communist Federation, 'Class War on the Home Front':

"In 1944, members of the Workers Revolutionary League, as the APCF was by then called (see the Introduction to the section on The Second World War), participated at the first conference of the Scottish Workers' Congress Movement, a radical trade union movement which put forward a programme for the revitalisation of Scottish industry under 'democratic workers' control'.These examples reflect the more diverse political views which began to appear in Solidarity as a result of the WRL's participation in the Workers Open Forum."

The footnote for the Workers Open Forum in the pamphlet is also interesting:

"The Workers Open Forum was established in Glasgow in October 1942 to organise regular exchange of views between all bona fide revolutionary organisations. The WOF's slogans were: 'A Workers Council for eliminating error. All parties invited. Let the Truth prevail!' Towards the end of the Second World War the activity which the APCF/WRL carried out independently in its own name was steadily reduced in favour of increasing participation in the Open Forum. The WRL and Solidarity thus both seem to have disappeared at the end of the war; the Workers Open Forum continued to be held in Glasgow well into the nineteen fifties."

Glasgow Branch members of the SPGB were regular participants at the Workers Open Forum throughout its entire history so, in all probability, they knew a number of the individuals involved in the Scottish Workers' Congress.