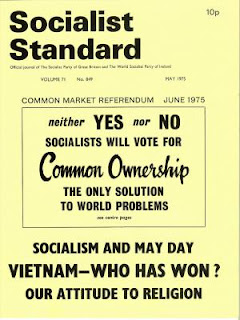 From the May 1975 issue of the Socialist Standard

A letter sent to Woking News and Mail as a contribution to a running battle between anti-union and pro-union debate.

Miners and Headmasters, “middle class” and “working class”? Surely it is high time both recognized that miners and headmasters are in the same class economically, namely the working class.

Of course, coal-miners can claim to work in tough conditions and to produce an end-product of obvious utility, while teachers on the other hand can claim long training and heavy responsibility. Every job has its peculiarities but these — responsibility, danger, dirt, boredom or whatever — do not divide workers into separate economic classes. (If they did, there would have to be as many economic classes as there are occupations: which would be nonsense.)

Many white-collar workers who sell their labour-power for “a salary”, not a wage, describe themselves as “middle class”. This term is impossible to define. But the essential fact is that these people have to sell their labour-power in order to live and are therefore part of the working class. Yet their education, tastes and sometimes their position at work (as managers, for instance) result in their identifying with the interests of the class which owns and controls the means of producing wealth. Thus they identify with their exploiters: like those ducklings who mistakenly regard Konrad Lorenz as Mummy.

Nowadays more and more of these “middle-class” workers have been forced to take industrial action and to recognize that they have the same problems as dustmen, miners or dockers. They even organize themselves into "greedy and irresponsible” trade unions in their attempts to maintain their living standards. Even Civil Servants go on strike!

Since there is so little difference in their economic position, all workers must eventually recognize their common class interest. The employers recognized their common interest as a class, years ago, hence the media’s and the Government’s bitter hostility against almost any group of workers who are “greedy and irresponsible" enough to demand wage or salary irresponsible enough to demand wage or salary increases. There’s never been a right time for pay rises.

To sum up: since an economic class is defined by its relationship to the means of producing and distributing wealth, and since our society is divided into a minority class who own and control the means of production and distribution, and a majority class who cannot live except by hiring out their physical and mental abilities, there is no place for this illusory “middle class”. This illusion only serves to divide the working class on snobbish grounds (staff against shop-floor, white-collar against blue-collar, manual against clerical, and so on). But it is only an illusion: in politics it is important to distinguish between myths and reality.

There’s no such thing as fairness in fixing the price of labour-power, any more than in the fixing of the market price of any other commodity. Another very good argument for abolishing the pay-packet- and-poverty racket in favour of Socialism, where class conflict will be a thing of the uncivilized past and where each will contribute according to his ability and obtain — according to his needs. Which simply doesn’t happen under capitalism, nohow.
Charmian Skelton

In the original letter, it was signed as 'C. Sultan.'

As a married woman, I used my husband's surname - this is how my entry in the electoral register appeared.
As a Socialist, I have always used my maiden name, whether as a writer , a speaker or in other contexts.

NB Other people - especially women - do change their names. In the 1950s, the SPGB had an EC member called 'Bob Coster'. He later used his real name, Bob / Robert Barltrop for Party work and as an author ('The Monument', 'Jack London', 'The Muvver Tongue' etc.