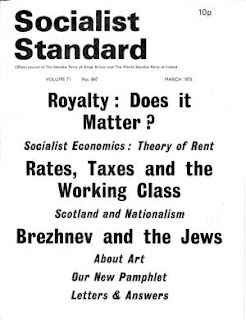 From the March 1975 issue of the Socialist Standard

About a year ago when the furore about emigration of Jews from the USSR to Israel was at its height there appeared in the letter columns of The Guardian (that gallant defender of the weak and the oppressed), a long, well-argued, and excellently written letter from a reader who wrote “as a Manchester Jew”. This gave him two positions of strength to start with. Manchester was of course the birthplace of the paper and its home when it had some right to call itself a liberal organ (perhaps I am being a little naive, but I prefer to cherish the notion that it was rather more genuine than it is today. Well, it must have been). And a Jew, seemingly, had the right to argue that Russia was not being beastly to its Jews as all these jackals and hyenas of the west were alleging.

The writer failed to add (no doubt through modesty) more about himself which would have helped readers to evaluate his contribution. He could have added that, as well as being a Manchester Jew, he was a lifelong Communist (whether card-carrying or fellow-travelling I know not). It would have enabled readers to appreciate that what they were really reading was a professional Communist propaganda effort fronted by a babe-in-the-wood from the Manchester ghetto. And they would have been on their guard accordingly. (How do I know this top-secret information? Well, it happens that I too am a “Manchester Jew” and used to attend the same Hebrew classes as this chap. I wasn’t born in the SPGB: very few of us are.)

What was he saying in this erudite epistle? The message came through loud and clear. Any talk of anti-semitism in the Soviet Union, that glorious fatherland of the Socialist Revolution, that fearless champion of anti-fascism, that gallant defender of minorities, not to speak of the widows and the orphans, was and by definition must be sheer scurrilous slander. Russia is not against the Jews. Perish the thought. It is only the Zionists, the dupes of the State of Israel, who are being put in their place in the USSR. And he went on to say, as they always do, that had it not been for the gallant Stalinist Red Army, Hitler would have solved the Jewish Problem once for all. (He forgot to mention, again they always do, that at the beginning of the war, Stalin had a pact with Hitler and was assisting his war effort until Adolf turned on poor old Uncle Joe. “Have we deserved to be treated like this?” as the Russian diplomat in Berlin whined as Hitler was kicking him out.)

I would have like exposing this stuff for the hypocritical Communist guff it undoubtedly was. But the great organ of freedom won’t print letters from the likes of me. But within a couple of days there appeared a far better demolition job than I could have done. The writer was a London Jew. Mr. E. Litvinoff (I don’t think he is any relation of the Stalinist foreign minister of that ilk, though he might be) wrote a devastating reply along the lines: So the Russians are not anti-semites eh? Only anti- Zionists? Well, get a load of this.

There then followed the story of a pamphlet recently issued in Paris under the imprimatur of the Embassy of the USSR. This official Communist document was not only a slander of Jews qua Jews. It was not, and could not be, against Israeli Imperialists. And why not? Because, as Litvinoff made clear, it was taken word for word from a pamphlet issued in the days of Tsar Nicholas, the last of the Romanovs, by an organization known as the Black Hundreds, whose sole raison d'ê·tre was anti-semitism of the most virulent kind. They were not merely propagandists. They organized pogroms of the most brutal kind. Before Israel was even heard of — nearly fifty years before, in fact. The men, women and children who were slaughtered in the pogroms had not been Israeli imperialist stooges — they were massacred and reviled because they were Jews.

Lots of good folk condemned these murderous monsters, including Lenin. So now we have the minions of the heir of Lenin indulging in the same filth as the Tsarists themselves. So much for the Stalin Constitution which guaranteed (so we were told) freedom for minorities — which never prevented Stalin from murdering “rootless cosmopolitans” right up to his death and the monstrous “Jewish Doctors’ Plot”. But Brezhnev is the heir not of Stalin, we are told, but of Lenin. He is clearly also the heir of the Tsars — of whom at least one thing can be said. The Jews were allowed to emigrate pretty freely; and enormous numbers of them did (including, I doubt not, the father or grandfather of our “Manchester Jew”).

Well, what did the latter reply to Litvinoff? You must be joking. He disappeared without trace into the Manchester fog from which he had emerged. That is the way with these people. They write a diatribe or speak a speech — and hope to get away with it. They often do. But when they are answered they show their lack of sincerity by keeping their heads down and their mouths shut. Hoping that everyone will forget.

Now, Litvinoff has made a book out of the episode and it was reviewed in the same Guardian as ever was by their Soviet “expert” Jonathan Steele (9th November 1974). The Guardian these days is a highly successful paper and its ever-growing circulation figures are enabling it to laugh all the way to the bank. It has a square creep in a square hole whichever way you look — Steele for Moscow, Gott for South America, Gittings for China et al. These people are not reporters, so much as artful dodgers and slippery eels on behalf of the red regimes. It must be some ten years since the paper had the temerity to print a letter praying to Gott to say something about the 20,000 political prisoners in Castro’s Cuba which he had described in glowing terms (having spent his time in the Havana Hilton instead of in a prison). For nine years I looked eagerly every day for His reply. I now realise that Gott (like our Manchester Jew) never replies.

Steele writes that he found Litvinoff’s book “very disappointing”. Well, having just come back from a three months’ trip to Russia where he seems to have visited everywhere apart from your actual salt-mines, he clearly felt hurt that anyone could be so cruel to his red-fascist friends. And what was wrong with the book? Mainly that Litvinoff pointed out (as he had done in the letter) that the Russians had indulged in the same scurrility as their Tsarist predecessors. He had failed to “define the line which should be drawn between anti-semitism and anti-zionism”. Why the devil should he waste his time in such rubbish? The import of the book (which was based on a trial in Paris when the editor of the pamphlet, a French Communist frontman who said in court that he had never even seen the thing till it was printed, was found guilty of stirring up racial hatred. Such communists) was to the effect that the Russians were not interested in any such line whether it could be drawn or not.

They reprinted pogromist literature so slavishly that they reprinted the mistakes of the illiterate Tsarists. So that Parisians in 1970, like Muscovites in 1900, can read that it is better to cast meat to the dogs than to a goy; or that a Jew can be happy when he hears an "akum” is dying. (I am quite sure there is no such word in Hebrew or Yiddish or any other language as “akum”. But Brezhnev’s men are determined to copy their mentors, boobs and all.)

Oh yes, and while Litvinoff is right to criticise the Russians for equating Zionism with Nazism, he actually compares Nazism with Soviet anti-semitism. Litvinoff really has a cheek. On the other hand, I suggest that next time Steele is a guest in Russia he visit a prison or asylum where some Jew is incarcerated and tries to show the poor devil how much difference there is between Nazism and Red Fascism.

Just in case anybody gets wrong ideas, we Socialists are not only concerned with Jews. We are concerned with all the victims of the capitalist jungle. East and West.
L. E. Weidberg
Posted by Imposs1904 at 10:06 PM