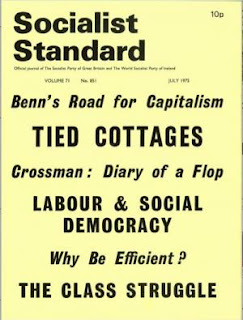 From the July 1975 issue of the Socialist Standard

In the run-up to last month’s referendum the man who excited most attention was Anthony Benn. The comments on his prophecies of doom and gloom ranged from stabs in the back from his own colleagues such as Roy Jenkins who said he couldn’t take Benn seriously as an economic minister (Guardian 28th May) to near-hysteria. For example the Daily Mirror (29th May) gave him the Draculean headline of “Minister of Fear”. An “X” certificate will no doubt follow.

The Guardian took the trouble to interview Dracula himself (21st May). The article was headed “Benn’s road to Socialism”. Benn did not define what he meant by Socialism (no Labour politician will do that), he only mentioned the word once. That was almost by accident when he referred to his package of reforms as “British Socialism”.

What concerns Benn is the running of Capitalism. And for those who care to look, it is perfectly obvious that he is determined to run it as efficiently as possible. This means that he is trying to ensure that the workers are exploited as hard as possible — because that is what efficient Capitalism means.

He thinks that industry runs without workers doing the work. John Palmer the interviewer asks him about “shop floor power” and should workers have a right to veto management decisions. Benn’s reply is a beauty: —

That kind of workers’ power already exists. But it is only being used negatively at present. Workers are accused of throwing spanners in the works BUT THAT IS THE ONLY TIME THEY ARE ALLOWED NEAR THE WORKS, (our emphasis)

Clearly Mr. Benn believes in perpetual motion and thinks industry runs itself. Workers may wish they were not allowed near the works, but capitalism is run only by the workers inside and out. It is Mr. Benn who won’t get to grips with the meaning of capitalism.

The inevitable question about loss of jobs was put to Benn, and he said — prophetically — “I can’t guarantee anyone’s job, including my own”. He then continued with this howler:

You cannot give people power without responsibility too. They understand this.

I wonder if he thinks the steel workers being laid off in their thousands take things so phlegmatically? They certainly didn’t when his fellow phoney, Michael Foot, went to Ebbw Vale earlier this year. When Mr. Foot asked them “to understand” that it was in their interests that they should be laid off, they gave him a roasting. Foot scurried back to the warmth and comfort of Westminster pretty sharp.

The rationale behind Benn’s approach is that he can control capitalism by putting into effect his policies. But he plainly admits that it is capitalism that controls the government, and not the other way round. Asked about the best way to use the taxpayers’ money he says:

The government does not dictate the pace of industrial change. It is forced by events to inter-act with reality.

Wilson once said the last labour government was “blown off course”. Benn is saying that there is no course to be blown off in the first place. Capitalism acts, and the government reacts.

For those members of the capitalist class who sit in fear and trepidation awaiting Benn’s next move, let him reassure them. Palmer talks about the “radical changes” that are taking place in industry. Benn modestly says “My  rôle in all of this has been very minimal”.

To the workers who vote for the likes of Benn, let him deliver his own epitaph. Palmer asks him about his views in 1966 when Benn was last in power. Benn disarmingly says:

The policies I followed between 1964 and 1970 had much to recommend them and were taken up by the succeeding government. BUT THEY DID NOT WORK, (our emphasis)

If the policies had much to recommend them, why didn’t they work? And how nice it is for Capitalist politicians to be able to dismiss their records of failure with such glib phrases. We can tell the working class now that Mr. Benn’s policies won’t “work” this time either. But we are not stating this so that later (when Benn too will no doubt again say he was wrong) we can say “we told you so”. We are asking the working class to ditch their allegiance to Capitalism and apologists like Benn and urging them to get on with the tasks of finding out about Socialism.