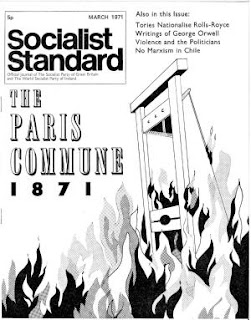 From the March 1971 issue of the Socialist Standard

The Rolls Royce affair is a practical example that nationalisation is vital to capitalism and has nothing to do with Socialism. In this case it appears to be a means of keeping in being production facilities which supply vital equipment to the armed forces of eighty or more countries and over two hundred airlines, while avoiding liabilities for losses expected by some sources to run up to £400m. Governments do not run capitalism; in fact it runs them. This comes out clearly in the Labour-Tory wrangles over who is to blame. Labourites point out that a previous Tory government has involved the taxpayer (read capitalist class) in paying out hundreds of millions of pounds extra costs over the Concorde treaty with France. Tories fume at being forced against their cherished political nostrums to nationalise Rolls-Royce. There are lessons in all this for the working class about the world they live in.

How was it that one of the world's largest aeroengine makers went bankrupt? In 1968 they won the contract on which the fatal trouble occurred to supply engines to the American Lockheed company for its Tri-star Aircraft. At the time it was considered a major triumph for British industry and the Labour government’s policy of promoting the growth of what they called high technology. As it turned out the development costs of the engine were to be much greater than originally calculated; production costs had risen and there are some unsolved technical problems causing delays involving penalties for late delivery. This is not unusual for this type of work and it has been pointed out that had the same contractual obligations applied to the Concorde project Rolls-Royce would have gone bust sooner. Lockheed have not been free of trouble: on one government contract costs had risen by three and a half times over the original estimate and their bankruptcy has been expected for some time. The American government share the problem of their British counterpart of how to keep a leading defence contractor in business.

It may seem that all this has come about as a result of bungling and incompetence. Those who hold this view must explain why Rolls-Royce was for so long a model of all that was best in capitalism. That is, it was profitable, its shares had an international clientele, as had its products. It was reputed to have the finest computer installation in Europe. As for labour relations it was a model that co-partnership proponents could point to. Over 4,700 of its employees held ordinary shares in the firm. Another ten thousand held special workers’ shares. Not that it was a small family firm. Rolls Royce employed nearly eighty thousand workers throughout the United Kingdom. As a result of mergers, takeovers and government reorganisation of the aero-industry, Rolls Royce became in recent years the sole aero-engine manufacturer in Britain. It may be said that with almost everything working in their favour Rolls-Royce still went bust. It could be said that other industries that have ended up nationalised had been among the front runners and become unable to compete with newer rivals while still important to the capitalist class. Events caught up with Rolls-Royce a little earlier.

Much of this is evidence of the contradictions that fetter the development of capitalism. Goods and services are produced for sale on the market with a view to profit. This generates competition and a drive towards the concentration of industry into huge groups or combines. This applies to the aircraft industry where competition has produced a demand for larger and faster passenger planes.

With each development came the need to spend more on research in order to bring into production larger and/or faster planes to render those in service commercially obsolete. Few firms are able to command the resources to keep in the race with hopes of huge profits or bankruptcy. It would seem that Rolls-Royce for all their resources can no longer do it. More correctly, the British government that backed it was no longer able or willing to risk the resources on such an increasingly large scale.

Nationalisation may help keep the weapons of war at the ready and airlines throughout the world flying. For those workers who don’t lose their jobs there is likely to be little joy. Those at the Rolls-Royce works at Crewe and Derby must already know that nationalisation in no way changed the social position of workers in the railway workshops there. They remained wage slaves.

One last point it is worth noting. Parliament can move fast when it comes to protecting ‘vital defence industries’. On the same day that it was announced that time would be found to get the nationalisation through in a week, pensioners were told that they may get an increase in six months time. That is what is known as getting your priorities right.


Ad Mad
Among the letters to the editor published in the Times on 2 February was one expressing deep concern at an act of Government discrimination against one national newspaper — the Morning Star. It continues

as a result no adverts on the technicalities of decimal currency have appeared in the Morning Star, with the result that

Its readers are thus being denied information made accessible — to readers of other national newspapers and relating to the most important change in our monetary system for ages.

There are two points worthy of comment in the above extracts. Firstly the Morning Star is known to be closely associated with a political party claiming to be Communist and allegedly basing its policies on the teaching of Karl Marx. One of the main tenets of this body of theory is that the machinery of government known as the state is an instrument of coercion used by a ruling class to maintain its privileged position over the rest of society. Is it not odd that a journal claiming to champion the interests of the working class should seek financial support in the form of advertising revenue from the executive committee of the ruling class? The signatories overlooked one great lament the political left make about the press is that financial dependence on advertising must lead to compromise in editorial policy — not that we would expect the Morning Star to compromise one dot or comma of their support for the policy of the British road to State Capitalism. (Not for all the Gold in Westminster.)

The Socialist Party of Great Britain makes use of advertising as a means of getting the party, its activities and publications known. However we consider that our object Socialism calls for uncompromising opposition to capitalism, its political parties and governments. Hence our publications are not open to advertise the activities of those we oppose. This brings us to the second point. Why is a paper claiming to base itself on Marxian policies wanting to advertise details of currency reform? After all, the abolition of private property in the means of production implies no more buying and selling and no more need for money. Maybe we are not being fair to the Morning Star. It is possible that they knew nothing of the letter and that the signatories, including such prominent trade union leaders as Briginshaw, Daly, Jenkins and Scanlon, acted independently. May we give due notice to these latter-day practitioners of 'the fair day’s wage for a fair day’s work’ policy that the implementation of the socialist principle of ‘free access according to need’ will not require a vast advertising campaign. This revolutionary measure can only be introduced by conscious majority action. That is, its implications must be understood before it is put in practice, not afterwards.
Joe Carter
Posted by Imposs1904 at 3:41 AM