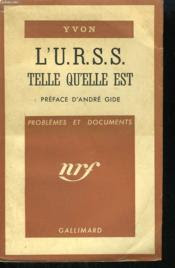 Book Review from the March 1939 issue of the Socialist Standard

Appalling ignorance as to actual conditions in Russia still obtains. “Communists” lying at home, and ruthless censorship in Russia, are the two chief factors responsible for this deplorable state of affairs. Added to these main factors is the fear on the part of Labour and “Left" generally of offending a section which might prove useful for assistance in vote-catching on “Popular Front" slogans.

“Yvon" has followed up his “What has become of the Russian Revolution?” with “L'U.R.S.S. telle qu’elle est" (“The Real Russia”; Workers' Bookshop; 28 francs). No translation is available yet, but some salient facts given by this worker, who started out eleven years ago as a high enthusiast, and ended in complete disillusionment, warrant immediate presentation; it is proposed to quote mainly from Russian official sources, as given by the author in his book.

It would be a pity, however, to omit reference to André Gide’s brilliant preface, and here we will endeavour to put over some of his points; it may be necessary to remind readers that Gide himself was once an enthusiastic admirer of Stalin & Co.

Gide opens significantly: “No solid construction can be based upon a LIE." His general reaction to the mass of facts adduced to Yvon (and other independent observers) is striking—it may not be literally true that “The worker in Russia to-day is in an unhappier position than ever before; he is less free than in any other country in the wide world," but, according to Yvon, the future general verdict cannot fail to fall far short of that of the distinguished French economist: “Time will show what plaited cunning hides."

The slight sketch of Yvon’s experience in Russia is highly interesting—his contacts were wide ranging from labour in a mine to a responsible position in a big industrial concern. It was while foregathering with the Big Pots (Kamenef, for instance), in one of the sumptuous residences which a grateful country gives its “giants and heroes" (enough to make Pollitt & Co.’s mouth water!), that, to quote Gide: “Yvon learnt much —in quite a different sense from his instruction from living among the workers—his first faith began to waver."

Fortunately for the subject of Gide’s short sketch, he had been wise enough to refuse military service, retaining his French nationality, but trouble was added to his growing doubts in the form of a Russian wife and, later, of a child. The two latter were Soviet subjects. Hard enough to escape as a French subject—“We know, from other similar experiences, the almost insurmountable difficulties of escaping from the foul web spun by G.P.U. spiderdom for its unwary erstwhile enthusiastic recruits"—but how to get wife and child beyond frontiers which, essayed without passport, involve death? How, in any case, to circumvent an officialdom where “several of Yvon’s staff, accused of sabotage, disappeared, and the place thereof knew them no more, but certain women took the veil—oh! ever so discreetly—since direct official sanction for sign of mourning was lacking.”

Space forbids recounting the grim struggle for “evasion" (beats Dumas into fits, makes Hugo look colourless), but the hearing of appeal for release made by the girl-wife should be read at once by all who can manage French without too many tears. The atmosphere, the whole conduct of the tribunal, should open the eyes of any who retain illusions as to the nature of this unparalleled ruthless despotism which the Communist Party of this country is subsidised to bolster up.

Gide summarises it in three acts. With fullest apologies for crudity and mauling of. a work of art, here is a synopsis: —

Act 1.—Paternal solicitude on part of “grand inquisiteur": “Where in the wide world can your husband find a better nest than here? In any case, he will long to come back. . . . You do not really wish to accompany him?”
Act 2.—Change of key; solemn warning: “Once your husband has quitted the soil of your fatherland, his light instincts will assert themselves ; his feet on the pavé of the Rue de la Paix, you will be forgotten—” (Only older readers who have sat in the gallery of the Adelphi, or “Surrey,” long years ago will get the full flavour of this act.) “—Bitterly will you regret the land of your birth, your brother, father, sister, friends.”
Act 3.—Loud pedal — after splendid little woman, tear-choked but firm, sticks to her point. Crescendo. The Soviet Pharaoh will drive you out! Strict time-limit. . . . No chance to “Spoil the Egyptians”—Soviet money not even exchangeable for foreign travel. . . . Still, they did get out, by the last available train, deliberate obstacles having been placed in the way.

Says Gide: “I know nothing more sickening than this sad recital."

Yvon’s own comment, at commencement of book (very freely done into English), seems to hit the mark:—

Red School Tie
Liberal, Labour, “Left" generally (even the I.L.P., whose relatively correct attitude on the recent crisis might deceive the unwary as to their still fundamentally Reformist outlook), class Russia as a “peace-loving" nation. Ponder the following:—

Isvestia (10.9.35) quotes Radek: “I have never yet found a single kiddy, who, when asked whether he would like to join up in the Red Army, did not reply: 'Do we not know the high honour of wearing the school uniform, whose aim and object is to prepare me as a soldier of the Red Army?' " Craftily cunning in “palace” intrigue, the Soviet bureaucrat limps painfully behind Downing Street’s subtle bids for cannon-fodder. Read that sweet youth’s reply again. Does Soviet Communism not only kill its Radeks, but also all sense of humour?

Suffer Little Children
A not uncommon experience on the S.P.G.B. soap-box is to have a “Russia To-Day” photograph waved wildly, with violent demand to show the audience a happy band of children engaged upon some highly cultural task, such as fruit-picking or harvesting (ever had some, sweet reader? Don’t murmur “gardening”; this is a serious topic).

Yvon (p. 243), quoting literally again from the Soviet official sources, “From the age of 12 years, children guilty of theft, wounding, assassination, or attempts thereto, are subject to all penalties provided by the common law.” (Death is one of the penalties.) After 28 years of “Socialism,” a reminder of conditions prevalent in England centuries ago. Yvon caustically heads his paragraph “ Le Paradis des enfants.”

Russia's a Prison
The difficulty of shaking the dust off one’s feet for natives of Russia has been referred to; significant is the attitude of Soviet authorities with regard to sailors. We used to be regaled with tales of bluff, hearty “ A.B.s ” slapping their “comrade” captain on the back, joining in spontaneous bursts of the ”Internationale,” and feeling generally that “everybody’s somebody.” . . . On page 241, light is shed upon one aspect of the Soviet’s strenuous endeavour to stop “desertion.” Every obstacle, including the customary “ Communist ” device of sheer lying, is placed in the way of sailors landing when in a foreign port. Sailors are given to understand that they run serious risk from foreign regulations if they land. And further, “To ask leave from ship is to write one’s self down already as a suspect ” (significant Jacobin word). Well might the Soviet Hamlet of to-day exclaim: “Russia’s a Prison."

“Intourist” Trippers Note
Elaborate precautions (see p. 246) are taken to prevent "Intourist” sheep from straying from the fold. “Certain regions” can be visited only by “authorisation speciale" of the formidable G.P.U. It is safe to assert that very special “authorisation” would be required to visit the concentration camp which a responsible writer has recently asserted contains more "traitors” than all the similar camps in Germany.

Telegrams of “journalists" (a wide term) “are always censored by a Special Bureau of the Foreign Office.”

Bread and Wages
It is notoriously difficult to estimate standards of living; no one would deny that Stalin & Co., with limousines, bed and board of “3 star” hotel level, are better off than before 1907. Statistics are too often a Mills' bomb in the hand of the unskilful user, but just one humble fact, from Soviet official figures, quoted by Yvon on p. 215:

The monthly salary of an ”average” worker before the war was 30 roubles; in 1937 it was 220 roubles, 7 times increase. Sounds good! But, the price of a kilo loaf before the war was 5 kopecks; in 1937, the same loaf cost 85 kopecks!! Not so good. 17 times as much for an article which stands in all economic books as a good general index of other levels of price. And, note well, the “loaf” of the “average” worker is “seigle,” in short, black rye bread (the “average” worker can afford nothing better).

A final word on wages. The range is extreme. 110 roubles (per month) for the “worker”; 1,000 for high officials; 20 to 30 thousand in a few cases. Did not the Saint Lenin, whose mortal remains (some of them) dominate the Red Square, proclaim in 1917: “The standard of living of the highest State official should not exceed the average wage of a good worker” ?