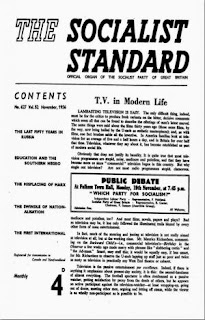 From the November 1956 issue of the Socialist Standard

WITH all the usual brass-bands and ballyhoo, the Labour Party has emerged triumphantly from the Blackpool Conference with what they fondly describe as a policy “ towards equality."

As always, the usual hallmarks of futility and chicanery were apparent. The pious but embarrassing resolutions of some of the constituency parties were turned down on the solemn recommendation of the Executive; the “safe” composite resolutions blessed by the Executive were ushered through (both with the aid of the Trade Union block vote), and once again the Labour Party, under the expert guidance of Mr. Gaitskell, sallies forth to meet all comers.

When all the shouting has died down, however, what is it that remains? Nothing but a pitiful collection of woolly and sometimes well-meaning resolutions, that signify nothing as far as actual practice is concerned, and a document called “ Towards Equality," which purports, in Mr. Harold Wilson’s words, “to set the ideals of the Socialist pioneers against the framework of the 1956 society.”

One would be at a loss to understand why a spirit of optimism pervaded the conference by merely looking at the resolutions passed and the policy statements adopted. What is really behind the optimism is, of course, that the Tories have struck a bad patch, and this in itself is sufficient for the Labour Party to entertain hopes of winning the next election.

So far as actual policy is concerned, a brief comparison of the attitudes of the Conference with the Labour Party’s actual record will amply demonstrate the emptiness of their claims.

Perhaps the most blatant example of the Labour Party’s hypocrisy over policy—and here it must regrettably be said that this hypocrisy is not confined to the leadership, but extends to the rank and file, too—was the attitude of the Conference to rearmament and conscription. There was the inevitable resolution that conscription be abolished as soon as the next Labour Government takes office, but this was turned down at the earnest request of the Executive, who stated that they should not be committed to the immediate abolition of conscription, but that they would dispose of this thorn in the side of the electorate in easy stages. And this from the party that extended conscription from 18 months to 2 years and instituted the biggest peace-time rearmament programme in this country’s history!

Mr. Frank Allaun, M.P., who supported the resolution to abolish conscription, stressed the obvious when he said that “National Service is becoming a national curse, and if delegates doubt this they should ask the conscripts and their parents, teachers and employers. The knowledge that at 18 they will be taken from their homes and jobs is unsettling the whole of the 15-year-old school leavers, and when they are called up they find that two years of their lives are wasted. It is utterly immoral to send boys of 18, who are not permitted to vote, to kill or be killed, not to defend freedom in this country, but to deny freedom to people in other lands.’’ All very true, but what has this to do with the Labour Party—a party that is committed to protect British capitalist interests when in power.

Another subject on which glib and pious resolutions were passed was colonial policy, particularly with regard to Cyprus and Kenya. One resolution stated that Cyprus should be given self-determination, and condemned the Tory Government’s policy, and another called for a commission of enquiry to investigate the brutal punishments imposed on non-Europeans in Kenya.

Here again, it must be pointed out that the Labour Party’s policy has in the past completely conflicted with their avowed ideals. As far as colonial policy goes, during the years 1945-51 they carried out a policy that hardly differed at all from the policies of Liberal and Tory Governments before and since. One has only to think of Malaya, Palestine and Seretse Khama to appreciate the hollowness of the Labour Party’s fine-sounding phrases, and it is fairly obvious that here too they have, when in office, followed the lines that one would expect from a party administering capitalism.

The example of Palestine is one that immediately springs to mind when considering the way in which the Labour Party, because of the pressure of world capitalist politics, has been forced to do something quite contrary to their prior declared intentions. At the 1945 Conference, Hugh Dalton, on behalf of the Executive, stated: “It is morally wrong and politically indefensible to impose obstacles to the entry into Palestine now of Jews who desire to go there . . .  we should facilitate this going by the provision of economic assistance in various forms for the development of the Land of Promise and Hope in a world which, for the Jews, has been blackened to an extent which none of us who are not Jews can begin to understand or appreciate." Not long after this, Britons, Israelis and Arabs were slaughtering each other.

Another dead and decayed horse that was further flogged at the Conference was the old story about the Labour Party getting together with the leaders of Russia and their allies and coming to some amicable settlement over disarmament It is well known that the memory of the electorate is short, but surely the Labour Party cannot imagine that it is that short. It is only a few weeks since the fiasco of Khrushchev and Bulganin’s dinner with the Parliamentary Labour Party, and one recollects the bitter aftermath of similar pronouncements in 1945, such as Dalton’s “Given that Anglo-Soviet relations are still clouded from time to time by suspicion and misunderstanding, I most emphatically hold that a British Labour Government is far more likely to remove these suspicions than a British Tory Government,” which was followed by the Cold War and the somewhat hotter wars in Malaya, Korea, and elsewhere.

These examples can be multiplied over every sphere of the Labour Party’s policy, whether it be pensions, housing, nationalisation, rent restriction, or anything else. The real tragedy is that in spite of the contradictions that riddle the Labour Party’s policy and history, and in spite of workers’ disillusionment during six years of Labour rule, the majority of the electorate will once again register their votes for capitalism—either the Labour or Tory variety.

What is basic to the whole question is this: The Labour Party is a party that intends to administer capitalism when in power, and to administer it in the only way possible—that is, in the interests of the ruling class. For all their fine phrases about equality and opportunity, they have nothing more to recommend them to workers than the Tory or Liberal parties. Mr. Gaitskell himself let the cat out of the bag when be said: "It is not true that we want exact equality. Provided there is a decent minimum wage, we don't object to a system of rewards related to the nature of the work." (News Chronicle, 4th Oct., 1956). This in itself adequately demonstrates the point that the Labour Party is no champion of the working class, and, in fact, is a more efficient oppressor than the Tories. Remember the wage freeze, or the rise in the cost of living between 1945 to 1951?

The Labour Party has certainly a lot to answer for. They have frittered away the energies of the working class by so-called reforms that have left the workers in the same position as when they started; they have turned working-class militancy into apathy; they have upheld the slaughter of one nation’s workers by another; they have led the trade unions into a position of tacit support for capitalism, by basing their wage claims on rises in the cost of living and production, instead of the basic fact of worker's exploitation. One could go on enumerating the policies by which the Labour Party has caused incalculable harm to the working class of this and other countries, but what is perhaps most unforgivable of all. they have deluded people into imagining that what they were doing was somehow bringing the equalitarian society of socialism nearer.

Our message to working people is this: Instead of looking to leaders and political racketeers to solve their problems, they should start examining the problems for themselves, and see what it is that keeps them in economic subjection. Once they do this, they are well on the way to seeing that only the abolition of classes and private property can solve their problems, and at the moment of this realisation, the golden days of Henry Ford. Bernard Docker, Anthony Eden (and Mr. Gaitskell) will be over.
Albert Ivimey
Posted by Imposs1904 at 11:48 PM