Here and There: When Mussolini Would Not Fight (1939) 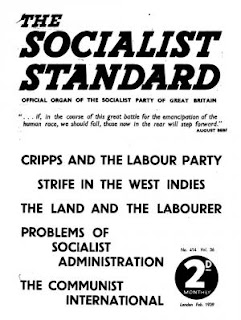 When Mussolini Would Not Fight.

During the past ten years or so The Socialist Standard has more than once had to debunk the idea, popular with Communists and the daily Press, that Mussolini established the Italian dictatorship in defiance of the State and its armed forces, and with the aid of a few thousand Blackshirt hoodlums. Frank Owen, editor of the Daily Express, in an article, “The March on Rome” (Evening Standard, January 13th, 1939), supports our view and reproduces a statement by Mussolini which has a bearing on the question. Frank Owen refers to the events of 1919, when Italy was demanding the Austro-Hungarian port of Fiume from the Allies, who were then dividing up the spoils of victory. D’Annunzio, the Italian poet and Fascist colleague of Mussolini, led a Fascist march on the port to demand of its Italian military commander, who held it for the Allied Powers, its surrender to Italy. Owen tells us that Mussolini sat tight and, when accused of deserting D'Annunzio, snapped : —


“Revolution will be accomplished with the Army, not against it: with arms, not without them: with trained forces, not with undisciplined mobs called together in the streets."

Which opinion he remembered and acted upon in connection with the miscalled “March on Rome" in 1922.

“What’s Up in Palestine?”

The November issue of Fact is a booklet of ninety pages, crammed with the sort of information which the Socialist looks for when attempting to get behind the appearance of world events. It is called “What's up in Palestine?” and is written by Michael Greenberg. The author analyses the historical, social and industrial background of the conflict between the Arab and Jewish nationalisms and brings clarity to it.

The interest of the British Government in the Palestine Mandate needs very little explaining. Palestine is on the British Empire sea route to India and is therefore of strategical importance, particularly since the political independence of Egypt. An oil pipe-line, which fuels the British Navy, also runs through Palestine. Whatever settlement is the outcome of the present disturbance, it is not likely that British dominance will suffer.

The origin of the present conflict goes back to the setting up of a National Home for the Jews under the protection of the British Government.

After early difficulties, out of which many observers prophesied the failure of. the experiment, Palestine became the scene of a thriving Jewish capitalist industrialism. Between 1919/1938, £80,000,000 of Jewish capital poured in with 300,000 skilled immigrants. The result was intense capitalist agriculture where formerly peasant farming prevailed. The effect was something like the Industrial Revolution through which the Western capitalist countries had passed. Peasant farming began to break up. When it remained it had to enter into cut-throat competition with the efficient and up-to-date Jewish capitalism, which meant a lower standard of living for the peasantry. Former peasant proprietors became landless labourers. At one time there were 200,000 of these dispossessed peasants employed as labourers on public works and by large Jewish firms.

Not unnaturally, the anti-capitalist sentiment of the Arabs takes an anti-Jewish form, and is canalised into support, for Arab nationalism. It may take the Arab worker some years to realise that his real enemy is capitalism in general, and not only the Jewish capitalist in particular. At the moment, another factor complicates the struggle. Thousands of Arab workers, accustomed to a very low standard, enter the labour market in competition with the Jewish workers, and threaten to depress the latter's relatively higher standard of living.

Fact, at sixpence a copy, is usually a sound investment. The November issue is worth that amount many times.

It used to be argued that to close the public houses would provoke “revolution." Somewhat exaggerated, perhaps, but nevertheless expressive of the fact that pubs did (before so many other diversions came to engage the worker's interest) provide a means of offsetting the drabness of the worker's working and social life, and of keeping his mind away from political problems. One of the later diversions are the football pools, concerning which the Daily Telegraph recently featured much correspondence from readers, both for and against them. The letter from the managing director of Goodsway Tates, Ltd., claimed for the pools what, in the past, has been claimed by the pubs, politicians and churches. He says (Daily Telegraph, December 10th, 1938): —


“They have certainly brought interest into many drab lives, and from a political point of view have done much good in keeping the minds of the populace occupied during depressing times and combating Communism than any other factor.”

The Swastika over the Andes.

The current issue of the American journal, The Reader's Digest, contains an article called “The Coming Struggle for Latin America,” which is a condensation of the book of the same name by Carleton Beals. It deals with the penetration of German trade into the countries which make up South America. The extent of the penetration may be judged by the fact that there are one hundred thousand Germans in the Argentine alone. Most of them are there in connection with the interests of German trade. The industries they pursue are hardware, agriculture and electrical machinery, printing, chemical, motor cars and dyes. In Mexico, Chile and Brazil, Germans own the textile factories. In Chile, German munition factories have been established. Throughout the whole continent German capitalists are getting control of copper mines, nickel mines, oil and iron-ore producing land.

In 1933/1936, German trade with Central South America increased by 500 per cent. The imports of munitions from America into Nicaragua were displaced in favour of munitions from Germany and Italy. And recently, Mexico entered into an agreement with Germany to exchange oil for industrial machinery on barter basis. Evidence of a similar penetration by Japanese trading interests is also given.

German, Italian and Japanese influence in South America goes still further afield than trade. Immigrants, workers and trading agents are trained to propagate the doctrines of Nazism and Fascism, to understand the traditions and customs of South Americans, to perpetuate the idea that English and American capitalism is decadent. In this they are assisted by the fact that most of the American States are under dictatorships. That American capitalism is perturbed by these developments is evidenced by President Roosevelt's calling of the Lima Conference for the professed object of exploring the possibility of the mutual defence of the American States from attack, and his violent attacks on Nazism and Fascism.

The Manchester Guardian, at the time of this conference, stated that the town of Lima was bedecked with thousands of Swastika and Fascist flags, but with only two American flags, one of which flew over the American embassy.

The expansion and development of German, Italian and Japanese capitalism has resulted in a weakening of the world influence of British and American capitalism, and is a threat to their interest s in the world's markets.

It is that clash of interests which is the material basis for the apparent clash between the so-called ideologies of Fascism and Democracy.
Harry Waite
Posted by Imposs1904 at 10:17 PM