Communism and Nationalism in the Middle East (1956) 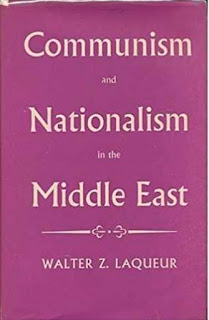 Book Review from the December 1956 issue of the Socialist Standard

This interesting book by W. Z. Laqueur (published by Routledge & Kegan Paul) is worth reading, both from the point of view of an understanding of Middle-Eastern politics and the study of Soviet and Communist party politics. This study, said by the author to be the first of its kind on the Middle East, deals with the Communist and Fascist parties (and similar organisations) and their connection with the rise of Arab nationalism in the Middle East. Most of the book is devoted to the history of these movements. The bibliographical notes cover 47 pages.

The intrigues, spying, treachery, double-dealing and sudden reversals of policy, which are common not only to Communist parties in the Middle East, but all over the world, are well covered. The author quite rightly links these political ups and downs with the Soviet Union and its foreign policy. He states: “We face similar conflicting trends in the role of the Communist parties. Their task in the age of ‘revolution from above’ is definitely not to engage in a ‘ leftist deviation i.e., to try their luck in a revolution. Strategically speaking, their assignment is that of a fifth column, which is not to strike before the other four are on the march . . . "(Page 279).

Some interesting figures are given on land ownership in Egypt and Irak. In Egypt: “80 per cent. of all Egyptian farmers own no land, of those who have land, more than 80 per cent, have less than two acres, which is considered the absolute minimum.” (Page 38). In Irak: “88 per cent. of the peasants own no more than 6.5 per cent, of the land, while the rest of the land is in the hands of the state and about one thousand shaikhs . . . (Page 173). All of which more than bears out the proposition that 90 per cent. of the world’s population own virtually nothing, whilst a small minority own and control all that is in and on the earth, and live in parasitical manner—in luxury—off the products of the majority.


Laqueur, like so many others writing on this sort of subject, makes the mistake of taking the Communists at face value. Implicit in his last chapter, headed “Conclusions” and Appendix 1. is the idea that Communism and Socialism are different things, with which, of course, we would violently disagree, but that the state capitalism of Russia is Communism. This, of course, accounts for some of the peculiar things he has to say about Marxism: “In no Asian country was there an industrial proletariat strong enough to head a successful revolutionary movement. The only theoretical alternative, according to orthodox Marxism, was therefore to give up the struggle for a social revolution and to wait until such a revolutionary leadership would emerge.” (Page 295-296). “Marxism, which was originally the theory of proletarian revolution in the most highly developed industrial countries, has thus been made in our time (in its post-Leninist stage) the practice of revolution in the backward countries.” (Page 297).

As far as the Socialist Party of Great Britain is concerned, the theory of class-conscious proletarian revolution of a world-wide scale in the highly developed areas of capitalism and the introduction of Socialism or Communism, whichever you prefer (the terms mean the same thing to us), is still a part of Marxism. Marxism to us is not just the above, but is the Materialist Conception of History, the Critique of Capitalism, the Labour theory of Value, Class-struggle, and, of course, quite logically from these flows the Socialist revolution. The idea of Socialism being established in one country, or backward countries, apart from being in complete opposition to this proposition, has been adequately dealt with in our literature, particularly in the pamphlets on Russia. It seems a pity that a reasonably good book should be spoilt by such inane conclusions, but then we can’t put a Socialist head on pro-capitalist shoulders.
Jon Keys