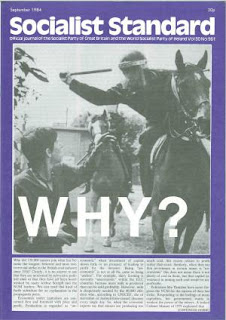 From the September 1984 issue of the Socialist Standard

When stripped of its showbiz trimmings the 1984 American Presidential Election is looking more and more like a rerun of last year's British counterpart. In both cases the incumbent governments have presided over very large increases in unemployment, with all this means in terms of working class misery and have responded by reducing rather than increasing the scale of welfare benefits. At one time the Labour Party in Great Britain had high hopes that this would lead to the Tories' defeat, but bitter disillusionment awaited them in 1983. They failed then basically because they were unable to convince workers that they had alternative policies to reverse the downward slide. Views expressed by embittered lefties like Alec Kitson, that Labour's 1983 Manifesto was effective but that defeat came about through misrepresentation by the Tory press, are not supported by the facts. If the American Democrats harboured similar illusions about an easy return to power they will long since have abandoned them in the face of considerable evidence to the contrary. They have however made a start, choosing their candidates for the Presidency and producing an election programme. It has to be remembered that it is the party which wins the race to the White House which forms the next government irrespective of the results of the elections to the two Houses of Congress.

Walter Mondale went into the Democrats' July convention in San Francisco in an apparently impregnable position. The only way he could be thwarted would be by application of a new rule under which delegates can switch their vote before the first ballot. This is however designed to unite the party behind an obvious front runner and avoid prolonged balloting, not to block a candidate who is the clear choice of party workers. The only way such a tactic could have been employed in Mondale’s case was if the convention had considered that someone else (which could really only mean his main rival Gary Hart) had a better chance of defeating Ronald Reagan.

The primary campaign can be divided into three phases. At first Mondale appeared to have a clear run. After Hart's victory in New Hampshire in early March it was suggested that Hart’s “new ideas” might sweep him to the nomination. In the context of trying to obtain a better deal for the working class under capitalism, any claims by Hart to have new ideas merely revealed his political cynicism and his failure to maintain his momentum during the final phase of the primaries may well have partly resulted from this point having sunk home. However in the field of the Democrats' 1984 chances of success, Hart’s complaint that the pro-Mondale forces represented the old alignment of Democrat supporters had some basis, in as much as Mondale’s biggest wins came in traditional strongholds and relied heavily on his following in inner city areas, the trade unions and so-called ethnic minorities. In contrast Hart’s successes came mainly in areas where the Republicans were successful in 1980, some of which the Democrats must win back in November.

The effect of the often bitter primary campaign on the Democrats' chance was summed up in The Times (7 June 1984):

According to Mr Mondale, who is trying to assure himself of the nomination by acting as though he is already the Democratic choice, the bruising primary battle has not caused irreparable damage to the party. Opinion polls tell a different story, however. When he opened the primary campaign as the Democratic front-runner polls showed him leading Mr Reagan by more than two points. Today, after 57 Democratic primaries and caucuses involving 15 million voters and $45m (£32m) in campaign spending. Mr Mondale is trailing Mr Reagan by eight points.

The gap then widened further and the Sunday Times (1 July 1984) indicated that Reagan led Mondale by 19 per cent and Hart by 12 per cent. There were however then still four months to go to polling day. If Hart had been chosen as candidate for the vice-presidency his apparent pull outside the traditional areas of Democratic support might have helped Mondale. However the low rating that Reagan has among women voters (according to The Times of 9 June 1984 Mondale leads him by 16 percent in this category) probably had much to do with a woman being chosen as Mondale's running mate. Ronald Reagan is said to hold old fashioned biblical views on the role of women in society. The Times (7 July 1984) reported that the National Organisation of Women (NOW) passed a resolution last weekend warning Mondale that they might initiate a potentially embarrassing fight at the Democratic Party convention . . .  if he fails to nominate a woman.” These campaigners should have realised from the experience with Margaret Thatcher. Indira Gandhi and earlier examples that electing a woman into a traditionally male post will do nothing to promote equality between the sexes nor to alleviate the problems of capitalist society.

The Democrats’ election platform was not finally hammered out until the convention met, when a 100-page document drawn up after much horsetrading by a 184-member platform committee was presented at San Francisco. This gives at least some idea of the stance likely to be adopted by the Democrats in November; for example, it calls for annual summit meetings with Russia starting next year. The Times (25 June 1984) reported that:

Attacking President Reagan as dangerous, reckless and out of touch with reality, it says the next President should update and resubmit to the Senate the unratified Salt 2 arms reduction treaty. On domestic issues, the document calls for new or enhanced government assistance for the various constituencies that form the party's backbone — the poor, elderly, blacks and other minorities. It also proposes tax increases for the wealthy and big companies to help pay for these programmes.

All this has a familiar ring to British ears. Although the Democratic Party has never claimed and is not likely ever to claim, to be a socialist party, here we have a programme that could easily have been put out by the Labour Party in Britain, perhaps accompanied by fanfares heralding a “new socialist dawn”. The only thing missing is any mention of a cosmetic nationalising of "the commanding heights". What is more, the Times report went on to say that "the document is more conservative than in recent years”. Coupled with the observation that the Democrats draw their main support from the same sections of the working class as do the Labour Party, this similarity of platforms intensifies the thought that the 1984 Presidential election is like a rerun of June 1983 in Britain. And it seems unlikely that the Democrats will be any more successful than Labour were then.. Which need not trouble anyone who is aware that Labour or Tory, Republican or Democrat, make no difference to the capitalist system.
E. C. Edge
Posted by Imposs1904 at 8:31 PM