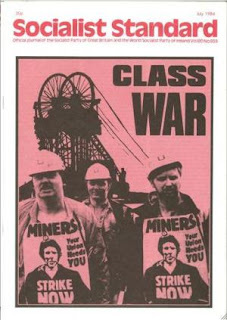 Editorial from the July 1984 issue of the Socialist Standard

When the miners came out on strike in 1972 they were given scanty chance of success for there were plentiful stocks of coal and competition from gas. oil and electricity was thought to have reduced the mines to the status of a dying industry. Who cared if the miners struck? The government were confident that they could simply sit it out.

In the event the miners won, partly by the tactic of sending pickets in strength to places which were not on strike but which were vital to industry, like power stations. In face of this threatened disruption the government capitulated; after the Wilberforce Enquiry the miners got a substantial pay rise. But inevitably that victory brought a reaction, for no government would happily concede so much industrial muscle to any group of workers. One reaction has been the industrial relations legislation which has outlawed picketing except in small numbers and then only at the pickets' own place of work. Of course the miners, realising that to conform to these laws would devitalise any strike, have tried to carry on much as before. On the other hand the government are determined that there shall never be another 1972; that is why the police have been out in such force during the miners' strike and why they have asserted the law with such vigour and with such disregard for legality.

The effect of this has been to place picketing squarely in the public eye and to make the picket, according to the political views of the person concerned, either a hero or a crazy, militant saboteur. Where do socialists stand on this issue?

A strike is the workers' weapon of last resort, with the unusual characteristic that it cannot be used without damaging the user. Just like other weapons, a strike has better chances of success if it is applied with maximum force; the most hopeful strike is one which is solidly unanimous. The implication in this is that such a strike follows a free, democratic decision with the strikers fully informed on what is at stake and sure that there is no other way of winning their point.

The function of a picket is to persuade workers against trying to work during a strike — against trying to blackleg — but in fact this often goes beyond mere discussion as the strikers mount a physical blockade of places of work so that nothing and nobody may move in or out of them. The present law is framed to prevent that happening and to reduce the "persuasion" to the most innocuous of discussion. Small wonder that the miners, with their long history of struggle, find the law such a frustration.

But it is necessary to ask why significant numbers of workers have to be persuaded to join a strike. Workers, after all. know what poverty is; they are familiar with the regular struggle to stretch a pay packet over the mortgage or the rent. food, clothes and travel, let alone such "luxuries" as a holiday. They know also that the employer does not easily concede a pay claim; indeed in present conditions the employers are likely to resist from the first to the last ditch. So why, in the face of this knowledge, should workers need to be persuaded to struggle to protect or to improve their living standards?

The importance of that question lies in the fact that, as we have said, the most effective strike is one supported by the total workforce, in a democratic decision taken with full information. Union leaders sometimes imply that they would welcome this but in reality they would almost certainly find it pretty difficult to deal with for it implies a level of consciousness higher than anything to be observed at present. Class conscious workers are few and far between at the moment; they are aware that capitalism is a society of two classes, defined by the way they get their living, and that these two classes are in continual, unavoidable conflict. While capitalism lasts this conflict will be over the division of wealth: the end of it will be the last stage in struggle — the dispossession of the capitalists and the transformation of the means of life into the property of the human community. It also implies a knowledge that class conscious, democratic workers have no use for leaders to formulate and hand down decisions to them — and. as history teaches, so often to betray the interests they are supposed to represent. But even a strike by such workers would still be a defensive act over the division of wealth: whatever its outcome it would leave capitalism intact.

This prospect is less dismal than it may seem, for such a strike would be evidence of the development of a mass movement asking some fundamentally important questions about society. Even if the strikers won, their class consciousness would forbid them to be satisfied with some relatively paltry wage rise when they could have the world, free of the problems of capitalism. Democratic and class conscious organisation on the industrial field is unlikely to take place unless there was also the same type of development on the political field, where the act of abolishing capitalism must take place. Workers who have seen through capitalism so that they appreciated the need to organise a strike of maximum power would also have grasped the urgency of political action to end capitalism and would be separately organised for that as well.

As the revolution draws near, socialists will be everywhere, running all sorts of organisations from a basis of democratic class consciousness. The majority of the world's people will be demanding, not the defensive restrictions of industrial action, but the acquisitive freedoms of an entire social takeover. They will organise the revolution for socialism because they will know that nothing less will do.

Socialism will be a classless society, free of all the conflicts and repressions of capitalism. Trade unions, as one expression of a class divided society, will not exist. In socialism human beings will co-operate in a massive communal effort for the common good. It will be a world of abundance, with free access to its wealth. People will read in their histories of these dark days of class conflict and poverty and they will wonder why, for so long, their forebears seemed to prefer to live like warring beasts rather than flourish like human beings.
Posted by Imposs1904 at 9:50 PM