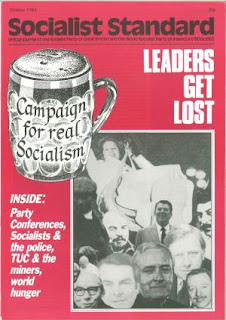 From the October 1984 issue of the Socialist Standard

Just as the greatest strength which the working class can have is consciousness of its social position and active solidarity in action, so the greatest weakness it can show is political ignorance and class disunity. At the TUC conference the rhetoric of solidarity provided an unconvincing disguise for the realities of class sectionalism and political naivete.

On the agenda was the Miners’ Strike. What a great opportunity for the speechwriters of spontaneous clichés to stir the conference hall with slogans as empty as the bellies of the strikers. Even before the conference commenced there was a deal struck between the leaders — leaders, note — of the TUC and the NUM. Scargill and his mates left the luxury suite of the TUC's General Secretary, having agreed on a compromise resolution to the conference. (Incidentally, we did not notice the press demanding that the miners' leaders should ballot the striking miners before the deal with Murray could be supported by the NUM). The compromise motion — stripped of the inevitable verbiage — amounted to three propositions: the TUC calls on the government to implement The Plan for Coal; the TUC calls on unions to raise money for the striking miners; the TUC calls on unions not to cross picket lines where coal or alternative energy products are being moved.

Let us take a look at the motion which was, after all, carried by an overwhelming majority of delegates, claiming to represent millions of workers.

The Plan for Coal
The TUC places itself in a position of dangerous class collaboration when it issues advice to governments about how to run capitalism. In fact, at least half of this year's TUC conference was spent on political discussions about the running of capitalism which is a matter workers should have nothing to do with. Resolutions were passed telling the government how to run its indoctrination (polite term: education) service, whether to support NATO, how to expand the health service and — in the case being considered — why it must stick to the policy for the coal industry outlined by the Labour government in 1974. The job of trade unions is to fight in the field of employment (the industrial struggle) over the question of wages and working conditions. If union officials put all the effort which is currently wasted on devising plans for the system which robs them and giving aid to the capitalist Labour Party into engaging militantly in the necessary struggle over the rate of exploitation then the bosses would have more to worry about and the House of Lords would have fewer retired union bosses claiming their seats in the rest home for those who have given loyal service to the cause of privilege and thievery.

TUC insistence that the government should implement The Plan for Coal is futile on at least three counts. Firstly, the government which has changed the old coal policy was elected, like all governments. mainly by members of the working class, not by a majority of capitalists. It has been estimated that as many as 35 per cent of trade unionists voted for the Tory government in the general election last year. For trade union leaders, who happen to be supporters of the Labour Party's schemes for capitalism, to insist — on behalf of their members — that the government must accept their set of priorities for capitalism is an impotent gesture. Secondly, by endorsing The Plan for Coal the TUC — again, on behalf of millions of workers — is giving its support to a plan for profit. The Plan for Coal is a policy for the running of the energy industry within Britain and within capitalism. But workers have no stake in Britain or in capitalism; our interest lies in the production of coal and other energy products solely for use. The details of organising democratic production for need within a worldwide, socialist society is what should be concerning workers — not these miserable little pleas for the capitalists to exploit us this way instead of that. Thirdly, what a massive waste of time and hope it is for the TUC to pass such pious resolutions, which will be regarded with contempt by Margaret Thatcher and her ministers.

Financial backing
The original demand of the NUM was for a 10p levy on all trade unionists to provide for the strike fund. After the deal struck between the NUM and General Council the demand was dropped and a general appeal for unions to provide money for the strike was included. This again was not a matter for the TUC: it is long-established that it is up to individual unions what they do with their funds. It was pointed out by one delegate that the government certainly did not ballot anyone before spending the three billion pounds which it has paid out so far to break the strike. This is untrue: the government won its right to represent the exploiters through the ballot box. If, instead of wasting its time on pious motions. the united trade union movement — the workers within it, not just their leaders — were to have engaged in the political struggle to prevent the election of a government which will strain every muscle to defeat the power of organised labour (which would mean opposing the Labour as well as the Tory party), then the agents of capitalism would have been defeated at the ballot box. Face the facts: the only alternative to the mess which the working class is in is socialism.

Inter-union solidarity
It was the third clause of the motion which was the most important, for if it was adhered to there can be little doubt that the miners' cause would be much advanced. It was the most important promise and also the most dishonest. The hard reality is that TUC leaders voting against crossing picket lines will not alter the fact that "total physical support" will not be given to the striking miners by most workers who are simply interested in going to work to get their pay. Hammond of the EEPTU — one of the most disgustingly reactionary trade union leaders in the history of the movement, to be sure — was being honest w'hen he stated that the TUC could make whatever phoney promises it liked to the miners, but his members in the power stations (who would be vital to the implementation of clause 3) would not be refusing to cross picket lines. Ron Todd of the T and G admitted that passing the motion was one thing, but implementing it would be another: the truer way of putting that is to say that if the TGWU started expelling members for crossing miners’ or dockers’ picket lines it would lead to the destruction of the union. TUC leaders' promises are next to worthless; what counts is the active solidarity of the rank and file workers.

Unity is Strength
Most strikes could be won by united action on the part of class-conscious workers in different industries and different countries. At present trade unionism is too sectional and too nationalist in its outlook. But why confine our ambitions to the limited aim of uniting to win strikes? Working-class unity, on the basis of socialist understanding, could win more than the crumbs or a bigger slice of the cake: it could win the world for the workers. Uniting for the feeble aim of the "right" to be employed (exploited) or "defending Britain's coal industry" is a waste of energy in comparison with the real struggle before us which is to win the world and everything in it for the people of the world.

Socialism will not be obtained by passing resolutions at the TUC. These opportunist union leaders who talk about representing the workers and who then spend more on a hotel suite for a week than most working-class families can afford for their annual holiday are enemies of socialism and will remain so as long as they seek to lead the working class. Socialism will not be helped by members of that viciously anti-working class party, the Labour Party, which has used the money of honest trade unionists in order to campaign for the power to govern against the unions. Socialism requires neither leaders nor followers. Workers must make our own revolution, consciously, democratically and united. If the miners learn any lesson from the TUC conference it is to ignore the sympathetic cheering and check the small print of the practical plans for action. Those seeking revolution rather than resolutions will have no great expectations about the outcome of the TUC's meaningless pledge of support.
Steve Coleman
Posted by Imposs1904 at 9:55 AM