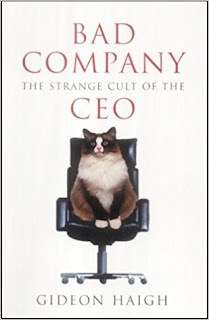 Book Review from the September 2004 issue of the Socialist Standard

Bad Company: The Strange Cult of the CEO by Gideon Haigh. Aurum £6.99

They used to be called something like ‘general manager’, but nowadays the main term for the head of a big capitalist company is ‘chief executive officer’. While they are nominally salaried employees, their pay as archetypal fat cats is so high that they are in fact clearly members of the capitalist class.

It was the growth of limited liability from the early nineteenth century that gave rise to the modern capitalist corporation and hence to the CEO Firms were originally run by their founders (or their heirs), but the owners faced the debtors’ prison if they went bankrupt. So few would buy shares in a company unless they could be personally involved in supervising how it was run. Limited liability meant that shareholders were no longer personally liable for any misdeeds or bankruptcies, so owners could delegate day-to-day control to a salaried manager, with a board of directors overseeing the whole thing.

As the title of this short volume suggests, the CEO has become a kind of cult figure, with in many cases a celebrity status and a pay packet to match (averaging over $30 million a year in large US companies in 2002, for instance). Many CEOs work long hours, apparently, though of course a lot of this time is spent in luxury hotels and swanky restaurants, and they are seemingly surprised when their employees fail to share their taste for sixty-hour weeks. Their income is reinforced by the curious idea of a ‘guaranteed bonus’, and of a ‘golden parachute’, paid to them if they are sacked by the board of directors.

And what does a CEO do in return for this generous remuneration? It’s clear that they do not in any real sense run the company, since big corporations are far too complicated to be managed by individuals. Rather, they concern themselves with the company as a business, often having little detailed idea about what it actually produces, and give orders that others have to implement. The impression gained from Haigh’s book is that if the share price keeps rising, irrespective of any medium- or long-term benefits to the company, then shareholders and directors are happy. Reducing costs by cutting staff is a favourite, and none too sophisticated, approach.

With golden parachute in pocket, a number of CEOs go into politics - President Bush’s cabinet, for instance, is full of them, from Dick Cheney to Donald Rumsfeld. As Haigh quips, “the Bush administration is more a CEOcracy than a theocracy.” The extent of this cosying-up is fairly new, but governments do not have to be full of ex-businessmen in order to serve capitalist interests.

Haigh makes the useful point that, while workers are urged to keep wage demands in check so that they can compete with other workers (especially those in other countries), CEOs instead always want to be paid more so as to be in line with their counterparts overseas — the idea of ‘internationally competitive’ has different meanings for bosses than for workers. While he is well aware of the absurdities of CEO pay, he has some odd ideas about the way capitalism works. For instance, he claims that “Companies do not exist to make profits; they make profits in order to exist” He seems to think this is an important correction to a common myth, but in whichever version it just means that companies are motivated by profit-making. Nevertheless, his book does give a useful picture of what CEOs do and don’t do, and of why we have no need of them and their fellow-exploiters.
Paul Bennett
Posted by Imposs1904 at 8:38 AM