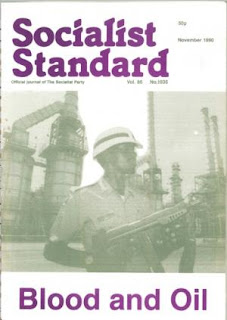 I attended the meeting at Conway Hall on Tuesday 11th September when the subject discussed was 'the Gulf Crisis’. The speakers put the Socialist case very powerfully which clearly illustrated the true and fundamental nature of the crisis—oil; and the one who had lived in Kuwait gave valuable information on the history of the State and the existing circumstances of the people.

I had to leave early and it maybe that the debate with the audience livened up and took a more serious turn after I had gone, but I left feeling disappointed and with a general impression that the sound arguments of the Socialist Party had been delivered in a manner inclined to beget antagonism from the general public. I felt that a degree of recognition of the dilemma of the Western Powers and the act of aggression by Saddam Hussein would not have been out of place. No thinking person will disagree with the diagnosis of the Party and their assertion that international war is inherent in the capitalist system, but given the circumstances of our obscene capitalist world what other outcome could we expect?

Would you not agree that some glimmer of hope arises from the fact that the United Nations, whatever their motives, have shown unification in their condemnation of aggression by a militarily powerful State over a small and militarily weak one? This surely cannot be a bad thing! It is a move, however inadequate we may regard it, towards a semblance of co-operation, which I would have thought would give some encouragement to Socialists, who by the nature of their philosophy advocate co-operation and not competition. Who knows—the co-operation idea could catch on and develop in other spheres! Similarly, I think Socialists can be encouraged by the Green Party which, though not fully understanding the nature of commodity production, has come to understand that in order to solve the ecological problems facing us we must take a serious look at the mode and manner of the production process.

Like members of the Socialist Party I want the Socialist case to become widely known and to be properly understood. This is no easy task for the Socialist Party—our rotten system is deeply ingrained into the minds and manners of men and it is going to take a lot to remove it. Maybe sometimes a softer approach rather than a bullheaded all-out condemnation of the efforts of those who try to bring about some improvement within existing conditions is required. I put it to you.

REPLY:
You are quite mistaken about the United Nations. Like the old League of Nations this is a "league of bandits" bringing together the political representatives of all the ruling classes in the world. It can only act with the agreement and acquiescence of the dominant capitalist States— America, Russia, Britain, France and China—and is being used on this occasion as a flag of convenience under which the Western powers are mustering to prepare any military action that might be necessary to protect the security of their oil supplies. We see nothing hopeful in such military co-operation to defend the commercial interests of the capitalists of the West.

We can and do recognise hopeful developments within capitalism but this does not extend to preparations for war.


The following report of the same meeting appeared in the October 1990 issue of "World Revolution".

On 11 September the Socialist Party of Great Britain held a public meeting on the Gulf crisis. This meeting was called on a working class terrain, since the SP denounces both sides in the conflict as equally obnoxious from the standpoint of the workers.

The ICC comrades present at this meeting affirmed our agreement with this basic class position. Or rather, attempted to affirm it, because our efforts to do so were drowned in a cascade of objections from the praesidium. Normally at SPGB meetings we are not obstructed from putting forward our positions. We can only assume that this sea-change occurred because this was a big meeting with the ‘gentlemen of the press' present, and the SPGB wanted to present itself nationally as the only force in British (parliamentary) politics to be taking a stand against the war. The SPGB was clearly embarrassed that the 'Leninists' of the ICC, who they like to lump in with leftist groups like the SWP, were taking an even more intransigent stand than they were. This sectarian attitude, which is based on the idea that the SP alone in the entire world defends the interests of the working class, is moreover rooted at the very heart of the SP's politics.

However, all the provisions made by the praesidium to run a tight ship at the meeting did not prevent them from clashing against the rocks when the simple and obvious question was posed to them by a member of the audience: what should workers do about the situation?’

The point is not that this is an easy question to answer in a detailed fashion, but that the SP cannot answer it even in principle. They had no answer in the First World War, nor in the Second, and they still don't have an answer today.

And the only ’answer' they could give to the questioner was to tell her, essentially, to join the SP—and hope that this would be as individually fulfilling for her as it was for them!

REPLY:
We are heartened that we are not alone in taking up the position that the threatening war in the Middle East is a capitalist conflict over oil and trade, routes-and that no issue is at stake, on either side, justifying the sacrifice of the life of a single member of the working class.

What to do? When war threatens or breaks out, all that Socialists can do is to denounce this as yet another manifestation of the barbarity of capitalism and to reaffirm that the workers of the world have a common interest in uniting to end capitalism and establish socialism as a world community without frontiers based on the common ownership and democratic control of the world's natural and industrial resources.

Readers interested in (if they have not already guessed) our views on the ICC and their admiration for Lenin are referred to an article in the August 1980 issue of the Socialist Standard (available from our Head Office for the price of a stamped addressed envelope). Those who want to verify that the meeting was conducted in our habitual democratic manner can purchase the tape-recording of the meeting—as, indeed, we urge all those interested in the socialist position on the Gulf crisis to do.