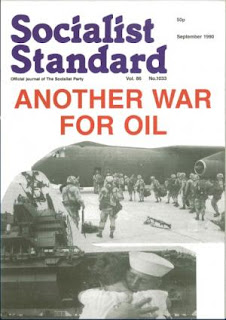 From the September 1990 issue of the Socialist Standard

The annual Tolpuddle Martyrs Rally is held every July to remember six Dorset farm labourers who in 1834 were sentenced to seven years transportation to Australia for the crime of organising a combination of workers to protect and attempt to improve their wages and conditions. In the past few years Socialist Party members and supporters in and around Dorset have attended this event, organised a stall offering a wide variety of socialist literature, and generally argued the case for world socialism and against capitalism in all its forms.

The Tolpuddle Rally, in common no doubt with many other trade union and working class events, shows the positive and negative aspects of working class organisation in the 1990s. On the more positive side, there is the anger of many workers at the problems, frustrations and limitations imposed upon us by a social system based upon minority class ownership of the means of life, production for profit and the exploitation of the useful majority; our ability to struggle and organise against such conditions is also clear. The problem is that workers seem too content to endlessly struggle against particular problems, attempting to treat them in isolation from the social system which creates them.

The events that the Tolpuddle Rally commemorates took place well over 150 years ago but despite the gap in time many similar problems remain today. One such example is trade union organisation. Workers at GCHQ are still involved in the basic struggle for the right to combine to protect and attempt to improve their wages and conditions of employment, following the ban on trade union organisation in that establishment in 1984. Trade unionists as a whole have in the last few years seen the introduction of legislation designed to weaken their ability to engage in effective industrial action. These events in themselves say much about the concept of freedom and democracy in capitalist society.

The struggle for trade union rights is of course a vital one so long as society is divided into two classes: those who produce but do not possess and those who possess but do not produce. For the former, trade union organisation is the only means of protection from the encroachments of capital. However, trade union organisation needs to be more about working class self-organisation and democratic control from bottom to top and less about letting leaders make decisions on our behalf. Secondly, trade unions which attach themselves to political parties which support capitalism, such as the Labour Party in Britain, risk having their effectiveness reduced when that particular party is in government. Also, the effectiveness of trade unions is very much dependent on economic conditions. Finally, whilst trade union organisation is vital for working class industrial self-defense, it is not an end in itself; workers also need to organise consciously and politically to abolish the system which is the root cause of the need to engage in this endless day-to-day struggle.

Fruitless diversions
Workers have been distracted from engaging in all-out struggle against the root cause of their problems by becoming involved in fruitless diversions and worthless causes. The two distractions that were most evident at Tolpuddle this year were the Poll Tax and state capitalism.

The collapse of state capitalist dictatorships in much of Eastern Europe has not deterred small groups of extreme dogmatists from putting forward the obscene idea that state capitalism equals socialism. The group next to the Socialist Party stall, the Revolutionary Communist Party (Marxist-Leninist), were putting forward the outrageous claim that Albania is a socialist country where people live in peace, harmony and prosperity. "Hands Off Albania!" their headline screamed. The one interest socialists have in Albania is in looking forward to the day when workers in that country follow the example of other workers suffering under the heel of state capitalist dictatorships and organise to bring down that system, not as an end in itself but as a prelude to co-operating with workers in the rest of the world to establish genuine freedom and democracy.

There are hopeful signs that the end of the detestable regime in Albania might not be that far off. Whilst most workers have quite rightly rejected the idea that systems similar to the one in Albania can in any way serve the interests of the working class, groups such as the RCP(ML) have succeeded in distorting the idea of socialism in the eyes of millions of workers across the world. The fact that any person, group or party should still put forward such undiluted crap is a testimony to their inability to understand the world they live in.

As for the Anti-Poll Tax Campaign, whilst this might be seen as less dangerous than the nonsense put forward by the Albania Supporters Club, in many ways it is just as damaging if only because more workers are attracted to it. Whatever the rights and wrongs of their actual campaign. what stands out is how such reformist demands direct workers' energies towards single issue campaigns and distract their attention away from analysing and acting on the real cause of their problems. Thousands and maybe millions of workers may be drawn to this campaign but. even if it is successful in abolishing the poll tax and replacing it with something else, workers would still be left facing a hundred-and-one problems. The poll tax is not the cause of workers’ problems, which existed in abundance before it was even thought of. Policies such as non-payment could well leave workers facing action by the state which will result in them becoming more impoverished than would have been the case had paid their poll-tax bill, and the failure of such campaigns will lead to political disillusionment.

Opposition to one specific policy such as the poll tax will not create conscious socialists as this can only be achieved by a movement whose one aim is the abolition of capitalism through education, organisation and democratic and conscious political action. This is not to deny that it is the experience of capitalism that causes workers to ask fundamental questions about the society they live in and to seek explanations and alternatives. The point is that more often than not reform movements lead only to dead-ends and disillusionment.

Socialist presence
What then can be achieved by attending events such as the Topluddle Rally? Whenever workers gather, and particularly at events where ideas are being discussed and exchanged, socialists have to be involved in putting forward the basic fact that capitalism cannot be reformed to work in our interests and that alternatives such as state capitalism are no alternative at all. Unclear ideas cannot be defeated by ignoring them.

What was achieved at Tolpuddle this year on 15 July was that the socialist movement was seen as being alive and active and putting forward a clear alternative. Participation was very encouraging. Apart from members and supporters from the Bournemouth area, support came from socialists in London, Brighton, Bristol, Surrey, Kent, Wiltshire and Devon. All in all about 20 members and supporters were engaged in selling literature, distributing leaflets and engaging in political debate.

To the workers we came into contact with at Tolpuddle and to all workers throughout the world, the socialist message is loud and clear. Don't waste any more time or effort attempting to reform capitalism or in the delusion that in some part of the world state ownership has proved itself to be a more effective or humane system than the private variety of capitalism.

Instead of campaigning for this or that reform join the movement which has as its sole aim ending a social system which cannot satisfy the needs of human beings and replacing it with one that could—one based on common ownership and democratic control of the means of producing and distributing the things we need to live, production directly for use. and free access to all goods and services on the basis of self-determined need: in short, a world-wide system run by human beings for human beings.
Ray Carr
Posted by Imposs1904 at 8:38 PM