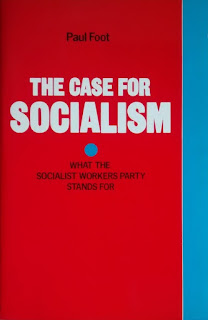 Book Review from the October 1990 issue of the Socialist Standard

Now that the idea of a vanguard leading a revolution and then ruling "on behalf of the working class" has become so thoroughly discredited might not seem the best time to issue a manifesto re-affirming this Leninist dogma. This, however, is precisely what the SWP have just done. They have commissioned their best writer, the Daily Mirror journalist Paul Foot who normally specialises in exposing capitalism for not living up to its own standards of "justice", to write a short book called The Case for Socialism.

Socialism is in fact only mentioned in the vaguest of terms—as the rule of the working class "from below" (even this is mistaken since socialism will mean the disappearance of the working class together with all other classes)—and it is the case for anti-socialist Leninism that is presented.


Bolshevik coup model
The seizure of power in Russia in November 1917 by Lenin's Bolshevik Party is described in absurdly glowing terms:


The October revolution in Russia, in which the soviets, under the leadership of the Bolshevik Party, asserted their power over the parliament, sacked the government and established what Lenin called 'the socialist order', is the greatest event in all human history.

This ridiculous claim is advanced on behalf of a coup which installed in power a group of anti-democrats who eventually evolved into a fully-fledged ruling class that ruthlessly exploited and oppressed the workers and peasants of Russia and Eastern Europe. Foot tries to argue that this outcome was all a terrible mistake: if only Trotsky had succeeded Lenin as dictator of Russia in 1924 things would have turned out differently.

This won't do. It's too easy to blame everything on Stalin while exonerating Lenin. The historical record shows that it was Lenin who paved the way for Stalin. It was Lenin who, bowing to the economic facts, stated that state capitalism was the only way forward for Russia. All Stalin did was to continue this but to lyingly call it "socialism". It was under Lenin that Russia became a one-party state and that factions (that is, opposition to the leadership) were banned within the only party allowed to exist. Stalin merely extended and perfected these dictatorial practices, and Trotsky only protested when he found himself on the receiving end.

Whatever Lenin may have written about democracy from below in State and Revolution before the Bolshevik coup, after it he adopted a different tone time and again defending the dictatorship of a revolutionary minority as a political principle. In a pamphlet written in May 1918 called The Immediate Tasks of the Soviet Government, he defined dictatorship as “iron rule, government that is revolutionarily bold, swift and ruthless in suppressing exploiters as well as hooligans" (Foreign Languages Publishing House. Moscow. 1951. p. 50). By "hooligans" he meant those who did not obey the edicts of the Bolshevik government. Such "hooligans" were treated “ruthlessly" enough, being "swiftly" rounded up and sent to populate the first gulags.


There is absolutely no contradiction in principle between Soviet (that is, socialist) democracy and the exercise of dictatorial powers by individuals, (p. 55. Lenin's emphasis)


. . . iron discipline . . .  unquestioning obedience to the will of a single person, the Soviet leader, while at work.(p. 61. Lenin's emphasis)

Stalin was thus, quite justifiably, able to claim to be as good a Leninist as Trotsky.

Minority action
Lenin scoffed at the idea of there needing to be a majority in favour of socialism before attempting to overthrow capitalism. John Reed recorded him as telling a meeting in Moscow on 27 November 1917 that:


The socialist political party—this is the vanguard of the working class . . . must not allow itself to be halted by the lack of education of the mass average. (Ten Days That Shook the World. Modern Library edition. 1960. p.15).

The SWP display a similar contempt for the “mass average" and for the possibility of us coming to understand the need for socialism. After denouncing the Labour Party for believing that socialism could be introduced on behalf of the working class from above by “an educated élite in Parliament”. Foot goes on to advocate not majority action but a different kind of élite action:


Socialists . . . should organise themselves, their activity and their propaganda to sharpen the weapons against the old society and to build the confidence and strength of the minority who are prepared to fight.
Minority. There is the word which causes the most heated opposition. Surely, it is argued, socialism is about majorities being in charge of society. Surely the exploited billions are the majority in society—by far. How then can socialists argue that they should concern themselves with a minority rather than seek to get the support of majorities?
The answer is that the minority among whom socialists should organise is active, while the majority whose votes are canvassed at election times is passive. The passive majority is prey all the time to the machinations of class society, especially to its mass media. The active minority, because it is active, is capable of resisting those pressures, of responding to new ideas and creating their own. The passive majority accept most of the time what they are told, what they read in the papers and see on television.

So, the SWP criticism of the Labour Party is not that socialism could not be introduced by an "enlightened few". It is that this “educated élite" should employ different methods from those advocated by Labour. Instead of seeking to attract the votes of the “mass average" of non-socialist workers to get into parliament and then to legislate socialism into being (indeed a futile tactic), the few should set themselves up as a vanguard party to try to lead the mass of non-socialist workers in an assault on the capitalist state (a suicidal as well as a futile tactic).

Both these alternative forms of minority action have failed. The Labour Party's tactic has led not to capitalism being gradually transformed into socialism but to the Labour Party being gradually transformed into an open party of capitalist government. The Leninist tactic favoured by the SWP has not led to socialism either but to the self-appointed élite in the vanguard party emerging as a new privileged class ruling on the basis of state capitalism. The SWP not only resolutely refuses to learn this lesson of the outcome of the Russian revolution but wants to put the working class in Britain through the same terrible experience.

The socialist alternative
Socialism, by its very nature as a classless society of common ownership and democratic control, can only be established democratically, in both sense of the term: with majority support and participation, and by democratic means.


It is not a question of a choice of two ways for getting to socialism: the democratic action of a conscious socialist majority or the action of some enlightened minority. It is a question of the end determining the means. Minority action cannot lead to socialism, even if it were to be that of a "fighting minority" of workers who really wanted socialism. Only majority action can.

Minority action leads at best to a few minor reforms of capitalism, but at worst to the sort of state capitalist dictatorships that have just collapsed in Eastern Europe. Socialism can only be established by majority action, not indeed that of a passive majority of voters but of an active majority of workers who have come to reject capitalism and are determined to establish socialism.

To end capitalism and achieve socialism such an active majority must first win political control, and in a country like Britain the obvious means are to hand in elections and parliament. Going into parliament, not to run capitalism but to end it. is not a betrayal of socialist principles. It is merely taking advantage of the easiest way for a majority to gain control of political power.

The SWP objection to using parliament (except to elect Labour MPs) is not that there is some more appropriate method for a active majority to democratically express and carry out its desire for socialism. It is that they don't think that their vanguard party could win an electoral majority. As Leninists they believe that a majority of workers are too thick to understand anything beyond the need to form trade unions and voting Labour ("The working class, exclusively by its own efforts, is able to develop only trade union consciousness”—Lenin, What Is To Be Done?). Only they, the "educated élite”, "the enlightened few", “the fighting minority" are capable of understanding the need for socialism.

Actually, the SWP are probably right about the inherent inability of a Leninist vanguard party like them to win an electoral majority. After all, why would we. why should we, vote for a party that tells us we are their intellectual inferiors?
Adam Buick
Posted by Imposs1904 at 7:28 PM