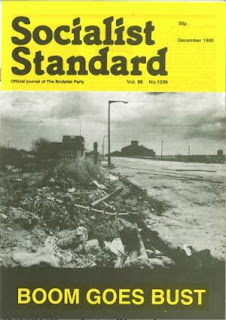 From the December 1990 issue of the Socialist Standard

What the media call the "recession" in Britain today provides a classic example of a capitalist crisis. The City yuppies have been surprised by a supply that is exceeding demand to the point that it is provoking a decline in orders and cutbacks in production. The sales slump is giving the economic crisis an unstoppable momentum: reductions in production, investment and employment.

This should be no surprise. Crises of overproduction and a reserve army of the unemployed are integral to the capitalist system. They are not only the consequences but also the necessary conditions of capitalism's existence.

Think back to the early 1980s. An increased intensity of labour and new technology were easily imposed on workers severely weakened by the high unemployment levels of the previous crisis of 1980-82. We are well aware of what this meant for workers in the years of Thatcher's so-called "economic miracle". There was a general frenzy of activity for people in work as the rate of exploitation increased. This went hand-in-hand with the introduction of computers into the office and robotics into manufacturing industry.

The result of this frenzy was a marked increase in the average productivity of workers. A general rise in productivity means a fall in the unit value of all commodities: more of them can be produced in the same period of time so each is worth less. This is disguised by inflation, but a price calculation in hours of labour-time soon reveals the real fall in value.

The sharp economic downturn that we are now facing is the point of overproduction, the sudden failure in the balance of supply and demand that triggers the process in which prices are brought into line with values. In other words, the crisis is imposing the new, lower values that have resulted from rises in productivity on those commodities, particularly fixed capital, produced under previous conditions. The result is losses for the capitalists and unemployment for the workers.

Falling values and the tendency to capital losses are manifested in the unprecedented levels of bankruptcy for small and over-borrowed businesses. “More than 16,500 companies collapsed between January and the end of September 1990", a third more than the previous year (Guardian, 28 September).

Credit boom
The economists in the service of capitalism examine only the surface phenomena of economic activity in the search for explanations of the crisis. The financial pages of the press blame individuals: Nigel Lawson, for one. They blame the banks and building societies for their high levels of lending. They blame workers for pushing for higher wages. But all these things are effects not causes.

The underlying cause, the imbalance between supply and demand, came first. The current crisis, like every crisis of capitalism, is one of overproduction with regard to markets. But until recently it has been concealed by credit. As Marx put it, capitalism


permits an actual free development only up to a certain point, so that in fact it constitutes an immanent barrier and fetter to production, which are constantly broken through by the credit system. (Capital, Vol III, chapter 27).

Despite all the talk about "tight monetary policy", the crisis has been delayed by neo-Keynsian recovery techniques: that is. by the Bank of England printing money for the clearing banks to lend. And the price of applying this technique is now, as it always was when overtly Keynsian, rising inflation.

For a while the Thatcher government managed to put off the inevitable, allowing inflation to rise. But the crunch had to come because high inflation cannot be sustained forever. For a start, when domestic demand is inflated by credit, imports rise as well, causing a trade deficit. This deficit puts downward pressure on the currency, necessitating high interest rates to hold off its complete collapse. But, on the other hand, a fall in consumer spending cannot be tolerated by industry because of its already high debt burden.

Exchange rate mechanism
Entry into the European Exchange Rate Mechanism (ERM) is an attempt to break out of this vicious circle. Thatcher hopes to give flagging businesses a quick fix before the general election without triggering a fall in the value of sterling. At the time of writing there has already been an interest rate cut.

Meanwhile, workers will pay the price of this quick fix. The ERM means that exports can no longer be protected from foreign competition by a devalued pound. John Major has already told workers to shoulder capitalism's problems by taking wage cuts if they want to keep their jobs. The President of the Bundesbank, Karl Otto Pohl, has given an ominous warning:

A country with an inflation rate three times as high as Germany's cannot link its currency to the Deutschmark without mass unemployment and enormous payments problems . . .  It is very important, and not always understood, that monetary union means doing away with the exchange rate as a corrective to divergent economic developments. (Observer, 23 September).

Entry into the ERM is the policy of both the Tory and Labour parties. It marks a cynical attempt to squeeze more productivity out of workers. It will achieve this by throwing thousands of workers on to the dole queue. Employers will again impose an increased intensity of labour on the remaining workforce weakened by the threat of unemployment. And here we go again!

Are we going to suffer another ten year's frenzy of activity only to find that cut-backs and unemployment are the reward for higher productivity? Do we have to go through the whole predictable cycle again?

Socialists say emphatically no. Socialism offers the means of escape from the tyranny of the market. It offers a society in which all work according to our abilities for the common good. We will all take according to our needs. Goods and services will be produced solely for use, not profit. The capitalist barrier and fetter need never stand in our way again.
John Dunn
Posted by Imposs1904 at 9:27 AM