Between the Lines: Charlie's Arm and Lenin's Brain (1990) 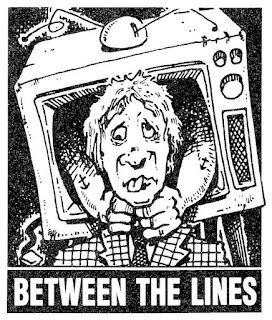 Charlie's Arm and Lenin's Brain
Maybe it’s the hot weather: or perhaps capitalism is just driving its supporters barmier than ever. July was an odd month on the box.

It started with headline news on both BBC and ITV. The Prince of Wales has fallen off his horse while playing polo. Second item on the news concerned a soldier being killed in Ireland. Forget that, it was more important to cross over to the reporter outside the hospital where Charlie lay surrounded by doctors and nurses. It was a broken arm — important enough for his wife to go and see him after she had finished watching the opera. First item on the news — all channels — the next day were pictures of the Princess going to see Charlie.

Second item was a report about record waiting lists in NHS hospitals. The newsreader turned from A to B without even a hint of embarrassment. Then, a week later, came another first-item news story: THE QUEEN MOTHER IS NINETY. This was a major scoop, apparently discovered by researchers who realised that after a year of the Queen mother being 89 something like this was bound to happen sooner or later.

BBC1 carried live coverage of moronic crowds gathering outside Clarence House waving Union Jacks and looking dopey. The band played Happy Birthday and then it was time for a documentary on Channel Four about the plight of the homeless. A large part of their plight is that they have not inherited Clarence House: it seems that some people — the overwhelming majority, in fact — can only ever dream of living in the kind of comfort which the parasitic Royals take for granted.

Live BBC coverage of old queens waving at old fools is higher on the media agenda than live coverage of old dossers sleeping in their own piss a mile away from Clarence House.

The nightly coverage of the Communist Party Congress in Russia was done reasonably well on BBC2's Newsnight programme. It is amusing to think that pretty soon all of those detestable academic Kremlin-watchers will be out of a job. There was an item on 8 July which revived the hot-weather theory of July's TV.

In Moscow there is an institute for the study of brains. It is, by all accounts, the most advanced brain research centre in the world. Newsnight's Jeremy Paxman interviewed a professor from the institute who had been occupied on research examining Lenin's brain He said that Lenin had an abnormal brain Its central cortex was bigger than other brains. This, said the straight-faced professor, may well have accounted for Lenin's supreme greatness This, we must presume, was the original mad scientist.

Perhaps he would care to investigate a slither of the Queen Mum's grey matter: or perhaps even a slice of Charlie's broken bone. It would be useful to be told just why the great appear great. We always thought that it is because the people who think their rulers are great are on their knees.


The Two Smiths
The summer madness continued as the bicentenary of the death of Adam Smith was celebrated by a variety of market-worshipping lunatics, some of whom are dangerously close to the reins of state power

Smith wrote The Wealth of Nations in which he contended humans have economic natures which lead them to always act on the basis of self-interest within the market. This was unhistorical nonsense, of course. Humans are not innately self-interested, but are social animals who live through co-operation.

Smith was quite evidently an ideologist for capitalism. Although those who read Smith (particularly his lesser-known tract, The Theory of Moral Sentiments) will discover that his view of human nature was not half as crude as that of the intellectual thugs who try to convince us that the rat-race of capitalism is a reflection of the rat-nature of humans; it is clear that Smith was a political economist whose blinkers enabled him to see no further than the institutions and relationships of buying and selling. As such, socialists are happy to leave Adam Smith to his Tory idolisers. Not so the Labour Party

It seems that they want to claim him as one of their own. Newsnight (8BC2. 16 July. 10.30pm) staged a debate between the Tory Scottish Secretary, Malcolm Rifkind, and Labour's Shadow Chancellor, John Smith. Rifkind argued that Smith A. was the man who understood that humans can only live happily when they are exploiting each other. His was the true party of Adam Smith .Smith J. was having none of this. The Labour Party agreed with Smith A. that the market is necessary, explained Smith J. He also agreed that humans are better off living in a society where there are profits to be gained. But, said Smith J., the market needs to be regulated every so often, and this was the view of old Adam Smith. Rifkind sulkily accused Smith J. of trying to steal Smith A. from the party that had done so much to promote his outlook.

Now, there has been much speculation as to who the real brains were behind the recent market-loving Labour Party Policy Review Was it all Kinnock's work? Surely not, for it only runs to a mere hundred thousand words, and most of them are not adjectives. Was it the product of Peter Mandelson's opinion poll of a thought process? No it was clearly the work of Smith — Adam Smith, the arch-ideologist of the profit system.