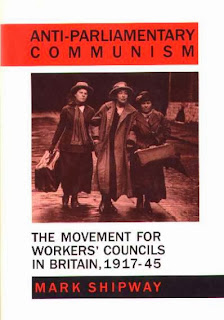 Book Review from the August 1988 issue of the Socialist Standard

Despite a good. seven-page description of socialism as a society of common ownership, democratic control, production for use and free access, this entire book is based on a myth: that there was, to quote its sub-title, a "movement for workers' councils in Britain, 1917-1945". That no such thing existed emerges from the text itself. Unlike Germany, Italy and some other European countries, Britain did not see the setting up of a single "workers' council. After the initial enthusiasm for the Russian Revolution among radical-minded workers died out here at the beginning of the 1920s, those who advocated them as a way to achieving a society of common ownership and free access were to be numbered, not in hundreds but in tens.

Mark Shipway an anti-parliamentarist himself really has to scrape the bottom of the barrel to sustain his thesis. Apart from a few anarchists in Glasgow during the last world war (who, to their credit, opposed fighting in it, as we did), all he can come up with are two individuals who were able to publicise what must be regarded as essentially personal views rather than those of any "movement".


One of these was Sylvia Pankhurst, daughter of the suffragette leader and a militant feminist herself before being bowled over by events in Russia. By 1924, however, she had tired of this and eventually went off to Africa to "help" the Abyssinians. It remains true, all the same, that during this period she did advocate a classless, stateless, moneyless, wageless society (see, for instance, her article "The Future Society" reproduced in 1980 in Socialist Fulcrum, journal of our companion party in Canada, from the One Big Union Bulletin of 1922) and eventually realised that Lenin was establishing state capitalism in Russia.


The other was Guy Aldred, a Glasgow eccentric who besides advocating "workers' councils" was also into free thinking, pacifism, abolishing marriage and republicanism. Nor is it clear how he qualifies to be called an "anti-parliamentarist", for when the Socialist Party contested a parliamentary by-election in 1962 one of the other candidates was . . . Guy Aldred! Shipway reveals that Aldred was also a parliamentary candidate in 1922 and 1945 as well as standing on fourteen wards in the Glasgow municipal elections in 1934. Aldred also tried to stand for Parliament before the first world war. So we are dealing here with a life-long commitment to contesting elections by someone Shipway tries to present as an "anti-parliamentary communist".


The fact that we opposed real (if ephemeral) "anti-parliamentarists" like Sylvia Pankhurst as well as half-baked ones like Aldred does not mean that we accept the label "parliamentarist". We certainly hold that workers must use parliament in the course of establishing socialism but it is the socialist-minded working class majority and not their "messenger boys" who will actually do so. And we emphatically reject the idea that socialism can be established by a series of reform measures voted by MPs, which is the more usual meaning of the word "parliamentarism".


When Shipway asks "who else besides the anti- parliamentary communists was putting forward such a vision of emancipation?" he knows the answer very well. Having borrowed the form of words we pioneered to describe socialism/ communism, he is fully aware that the Socialist Party has sustained this vision much more effectively than his "council communists.
Adam Buick
Posted by Imposs1904 at 7:16 PM