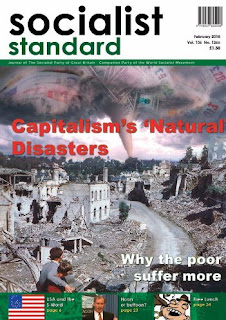 Editorial from the February 2010 issue of the Socialist Standard

Off Haiti the USS Carl Vinson, an aircraft carrier, enables military helicopters to transport food, water and medical supplies to people on the island who desperately need them. USAF air traffic controllers guide planes from all over the world carrying other supplies and equipment to land safely at the airport at Port-au-Prince. A US hospital ship and naval vessels from other countries wait offshore.

Socialists are perhaps not alone in seeing the irony of organisations that normally deal in death and destruction being called in to deal with a situation caused by a Nature that has wreaked death and destruction. For armed forces are just that – bodies of trained men and women whose mission is to kill and maim people and to destroy and demolish buildings. Just as at the very same moment other military helicopters and planes from other aircraft carriers are doing in another part of the world, Afghanistan.

Still perhaps we should at least be grateful for small mercies and not complain when, for once, the armed forces put aside their weapons and do something useful for a change. In any event it is what the people of the world want. It is clear that people all over the globe do genuinely feel for their fellow humans when they are hit by an earthquake as in Haiti or by a tsunami as in and around the Indian Ocean five years ago. They want to help and they do help in whatever small way they can. A sign that, deep down, people do consider themselves as members of a single human community, as people of the planet Earth.

Only a callous buffoon of an American money-seeking bible preacher could say that the earthquake was an act of a god angry at the people of Haiti for some sin they are supposed to have committed. The scorn with which his claim was greeted shows how far removed we now are from the times when this would have been the standard explanation, accepted even by the victims.

Humans are not able to prevent earthquakes but, quite apart from the fact that much that could be done to mitigate their consequences is not done for reasons of cost, a united socialist world provides a better framework than capitalism for dealing with these inevitable Acts of Nature. That today armed forces have to be (partially) diverted from their normal destructive activities to deal with these natural disasters brings out that under capitalism, with its division of the world into competing states, there is no permanent international rescue service of trained men and women, having its own helicopters, landing craft and, yes, even aircraft carriers. As there could and no doubt will be in a socialist world. Without guns of course.
Posted by Imposs1904 at 5:09 AM