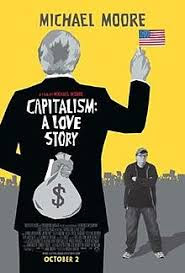 Cross-posted from the Socialism Or Your Money Back blog,

Like Michael Moore’s other films, 'Capitalism: A Love Story', is brilliant in its way, hard-hitting and funny. He strips away the lies and hypocrisy of “public relations” propaganda to expose the ruthless predators who dominate our society and profit from the misery of working people.

And at the same time he makes us laugh. So far so good. It’s fairly clear what Michael Moore is against. But what he is for? He doesn’t seem to know himself, as he admits in a recent newspaper interview:

“What I'm asking for is a new economic order. I don't know how to construct that. I'm not an economist. All I ask is that it have two organising principles. Number one, that the economy is run democratically. In other words, the people have a say in how its run, not just the [wealthiest] 1 percent. And number two, that it has an ethical and moral core to it. That nothing is done without considering the ethical nature, no business decision is made without first asking the question, is this for the common good?” (Guardian, 30 January).

We too want democracy to extend to all spheres of social life. For us that’s what socialism is – the common ownership and democratic control of the means of life by the whole community. But genuine democracy will not be achieved by relying on economists or other supposed experts to design it.

By its very nature, democracy must be created by a conscious majority. Michael Moore seems to be saying that in his “new economic order” the wealthiest 1 percent will still exist, even though they will no longer have all the say. He also assumes that there are still going to be “business decisions”. But business decisions are about making money, not serving the common good. Any firm run by managers who care too much about ethics and morality will soon go bust – unless the managers get sacked first!

On one key point, he is right. If the situation he exposes so well is to change, it really does require a “new economic order”. An end to production for profit. The alternative is a society in which the means for producing what we need are owned in common and run democratically. A society in which productive activity is no longer “business” but simply cooperation to satisfy human needs.

This is much more than he offers on his website (www.michaelmoore.com). He says nothing there about any kind of “new order”. It’s all about campaigning for various reforms. These may well be of benefit to working people in the short term, but as they still leave capitalism in place there would always be pressure to reverse any gains made. Worst of all, and despite Michael Moore’s evident disillusionment with Obama, heurges readers to work for change through the Democratic Party – a recipe for endless failure and frustration.

One last point. Michael Moore talks only about changing things in the United States. This national focus makes it impossible even to conceive of a fundamentally new society. That’s because nowadays capitalism is a highly integrated world system and can only be replaced at the global level.

It is clear to us that society urgently needs a worldwide system upgrade…from capitalism to socialism!
Stefan