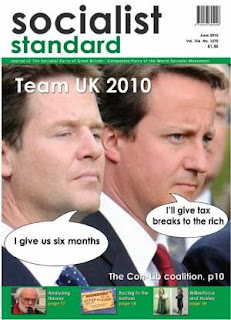 Last month’s general election was dominated by “the economy” but the politicians never learn. Despite all the evidence to the contrary, they were still claiming to be able to control the way the capitalist economy works.

You might have thought that the Labour Party would have become more cautious about such claims following the exploding of Gordon Brown’s claim to have put an end to boom and bust. But no. “The economy is coming out of recession thanks to Labour’s measures”, claimed a leaflet put out for the Labour candidate in Streatham.

The economy does seem to be beginning to come out of the biggest slump since the end of the last world war, but this was bound to occur sooner or later as the movement of the capitalist economy is cyclical. A period of recession and stagnation is followed by a period of expansion just as a period of expansion is followed by a period of recession, each period creating the conditions for the other. This in accordance “the economic law of motion of modern society” which Marx said in his Preface to Capital he had set out to lay bare.

The Labour government happened to be in office when the recovery stage of the cycle showed some modest signs of beginning. But if they want to claim credit for this by virtue of simply been in office at the time, then they should also accept responsibility for the recession that preceded it when they were also in office. In fact they and their policies were responsible for neither. Uncontrollable capitalism was.

The other parties, naturally, claimed that the Labour government had been responsible for the recession – and that their policies would bring it to an end.

“We’ll cut Gordon Brown’s waste and debt to get our economy moving”, promised the election address of the Tory candidate in Vauxhall, “Labour are now the party of unemployment. Conservatives will get Britain working again by boosting enterprise”.

The LibDems were no different. “Labour promised us economic stability, but they have failed”, said a leaflet put out on behalf of their candidate for Richmond Park. “Only the Lib Dems and Shadow Chancellor Vince Cable have a plan that will get our economy moving forward again.”

But no government has the power to get the economy “moving”. All governments do is preside over the workings of the capitalist economy as it moves forward and backwards of its own accord, irrespective of what they may or may not do.

So why do politicians claim to have a power they do not have and make promises on this basis? There are only two possible answers. They either take us for fools or they are fools themselves.
Posted by Imposs1904 at 6:34 AM