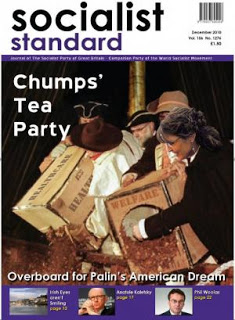 
The only flourishing industry in Ireland now seems to be economic punditry.

A fellow socialist recently sent me an economic article critiquing the contrasting financial approaches of the various governments in Europe to the current crisis. It wasn’t the first article that I’ve read on this subject! Ever since the storm broke in autumn 2008, the media in Ireland has filled the airwaves/newspaper pages with an endless procession of economists commenting on various aspects of Ireland’s severe economic situation and either second guessing the government’s decisions on various policy matters or attempting to persuade the people that they have much cleverer solutions to ‘our’ problems. Part of my weariness with all this analysis stems from the fact that as a socialist I know booms and slumps are an inevitable part of the economic operation of capitalism and there was clearly an unsustainable boom occurring in Ireland over the years 2004 to 2008. So now we have the consequent contraction which is just going to have to be endured as long as capitalism governs our lives.

In fact, the only flourishing industry in Ireland now seems to be economic punditry and whether you open a magazine, turn on the TV, listen to the radio or surf the net for news, you won’t have long to wait until you encounter the predictions of economists mainly drawn from either academia or the financial institutions or on some rare occasions, the trade unions. Because Ireland’s situation is deemed so critical, we even have Nobel prize winning economists from the United States commenting on us, while just a few years ago we wouldn’t have merited any attention from them as they’d probably have been pre-occupied with China.

In fact one popular media economist, David McWilliams, currently has a travelling roadshow where he tours the country, filling halls and theatres with his views. As the publicity blurb for his ridiculous ‘Outsiders’ tour goes “McWilliams believes Ireland’s political and social divide is not so much about rich and poor, young and old, urban and rural, but about Insiders and Outsiders”. This strange mixture of showbiz and economics has climaxed in a ‘Kilkenomics’ festival held in Kilkenny in late November where stand up comedy will be interspersed with economic analysis. On its website one of the topics listed for discussion is to be ’23 Things they don’t tell you about Capitalism’. As the man said, you couldn’t make it up!

What’s tiresome about all the contributors to this public debate, is that in spite of furious argument over some superficial points, essentially they’re all singing from the same hymn sheet. Corrective action is needed to deal with Ireland’s soaring debt and it’s only the time scale (whether it should be over 4 or 6 years) and the areas of public spending to be excluded from cuts (such as old age pension) that are in contention. It is now anticipated that a general election is only months away and it’s noticeable that the main opposition parties have moderated their criticism of the government’s budget approach; they know full well that room for manoeuvre is extremely limited and if elected (which seems very probable at the moment) they will be implementing the hair-shirt budgets over the next four years.

To give some background, it now seems accepted that whatever reality lay behind the Celtic Tiger had by about 2003/2004 been replaced by an old-fashioned, foundation-less credit boom based on the expectation that property (both residential and commercial) was destined to appreciate at a significant level beyond any other type of investment. This led to a frenzy of construction, some clearly insane even to non-socialists, where perfectly functioning warehouses, hotels and office blocks were demolished so their footprint could be used for even more profitable apartment blocks and fancier hotels.

By 2006 the unsustainability of what was happening began to be widely commented upon in everyday life though this didn’t seem to flag any warning bells with Brian Cowan, the then minister of finance, subsequently promoted to Taoiseach (Prime Minister). The crash has highlighted a structural weakness in Irish politics whereby that opaque interaction between the politicians and leading business people (particularly property developers) masked the rationale for economic decisions. By 2008, a huge proportion of Irish government revenue was attributable, directly or indirectly, to the construction sector in terms of which has now all but vanished. This has left an almost twenty billion euro gap between the government’s annual income and expenditure. The problem has been exacerbated by the government’s initial decision to give a very wide ranging guarantee to all the main banks’ creditors. As the scale of loses (fifty billion and counting) has turned out to be much greater than anticipated, this has increased Ireland’s need to borrow. Whether the government naively underestimated the risks from this banking strategy or was responding to the pressing needs of some well-connected business people has been hotly debated since.

The predominant response to date in Ireland has been a fearful resignation rather than any outright ‘resistance’ as has intermittently been seen in the strikes and demonstrations of France and Greece. Partly this is due to an apathy to the potential power of real politics, that has been engendered amongst great swathes of the electorate, resulting from so many broken promises by reformist parties over the years. Unemployment has risen sharply and emigration as a social phenomenon has returned. A reduction in living standards is seen as inevitable in the medium term. There has been a deliberate divide and rule strategy employed by the ruling class with a vociferous campaign, championed by the media outlets controlled by the media tycoons Tony O’Reilly and Denis O’Brien, waged against public sector worker to separate them from private sector employees.

That is not to say that people are not angry about the situation and the heavy penalties and burdens they are now expected to bear as a result of reckless and profligate activities of bankers and developers. What is perceived to be most galling is how when the senior executives in many financial institutions knew that the balloon was going up, they negotiated or arranged legally watertight generous exit packages for themselves, without a care for the consequences to the mass of the people. It certainly has raised questions about the ‘fairness’ of the system which is a clearly welcome development for socialists. Of course some of the discontent is mis-directed, with talk of betrayal by the government, when the recession is an inevitable part of the capitalist cycle albeit in this exacerbated by the greed and incompetence of the local ruling class.

The power of capitalism over people has never been more nakedly exposed. The government’s daily mantra is the need to restore confidence in Ireland’s position to ‘the market’ when we know ‘the market’ is fundamentally that very small number of people who control multi-billion financial investment decisions. So each government action is quantified as to whether it has reassured the markets (which we’re constantly told is a good thing) or has caused uncertainty (‘a very bad thing’) as the more uncertain the markets are, the greater the interest rate Ireland must pay on the loans it needs to raise. The fact that it’s naturally in the market’s interest to either doubt, or at least feign doubt, about Ireland’s economic outlook in order to justify higher loan charges is never commented upon which shows the whole deal is really a gigantic scam. Perceived wisdom is that it should be easier to make socialists in a recession when the shortcomings of capitalism are more evident. This capitalist recession will eventually end and the Irish economy at some time in the future will inevitably return to growth. If there are more socialists in Ireland at that future time, then at least one positive outcome will have resulted from this sorry and preventable mess.
Kevin Cronin
Posted by Imposs1904 at 5:05 PM