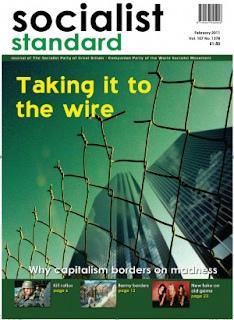 In November David Segal of the New York Times interviewed a number of economists to see what ideas they had about how to get out of the current slump (See here).

The silliest suggestion came from Professor James K Galbraith who proposed paying unemployed workers their full social security benefits when they reached 62 which, he claimed, would create jobs because “they would have 22.5 percent more purchasing power than they would if forced to wait until the age when full Social Security benefits kick in”. But where would the money to do this come from? Only by transferring it from somewhere else in the economy, but this wouldn’t increase overall demand. Since he was also recorded as saying that “we’re likely to see a situation that makes people angry and miserable for years” he didn’t seem particularly convinced that his proposal would be adopted.

Professor Gar Alperovitz saw the way-out as via more employee-owned enterprises. “If the economy and the government don’t have an answer to the problem,” he said, “people are forced to try social enterprise.” But such enterprises – small businesses such as laundries – are not going to generate enough investment to get capital accumulation going again. In fact they survive largely by paying lower wages and accepting lower profits than a business normally would. Most will probably eventually go bust anyway.

Others realised that only something that would stimulate capital investment might work. Someone suggested investing in “green energy initiatives” but wasn’t too convinced that this would happen as, not being profitable in the short run, it would require government subsidies to get started. Someone else suggested that as the average age of the population was rising there would be more demand for medical treatment and that this could generate investment in technological breakthroughs in this field.

A mad marketeer from the Cato Institute pointed out, correctly as it happens, that “time was a key ingredient to a recovery”. Yes, time for the slump to create the conditions for a slow recovery, through unemployment exerting a downward pressure on wages and spare capital exerting a downward pressure on interest rates, both of which help to restore the rate of profit. He, however, looked forward gleefully to another consequence: governments cutting their spending to lower taxes on profits. “I think,” he said, “we also have a bubble in the labor market for state and government employees and over the next two years we might see as many as one million of these employees lose their jobs.”

Professor Andrew Caplin saw the answer in a growing inequality of wealth and income providing jobs for “the poor and middle class to cater to the economy’s biggest winners” servicing them as cooks, nutritionists and financial advisers. "Professor Caplin worries,” reported Segal, “that this concept might be caricatured as ‘cater to the rich’.” As well he might, but, given capitalism, he was on the right track. Increased inequality – a shift in favour of property-incomes – is a necessary, though not a sufficient, condition for a resumption of capital accumulation and, when it eventually does, will lead to a further increase in inequality.

That‘s all capitalism has to offer – periods of pain alternating with periods of increased inequality. It‘s not so much economists as the system they study, capitalism, that‘s dismal.
Posted by Imposs1904 at 10:42 PM