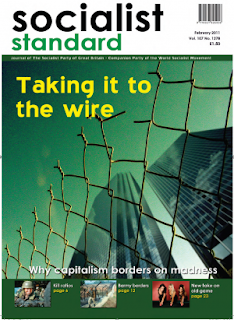 From the February 2011 issue of the Socialist Standard

It is always inspiring to see people power in action, as in Tunisia last month, where it forced the local dictator to flee after twenty-three years in power. It shows that people are not always passive victims but have the potential to topple capitalism not just dictators.

In all countries society is divided into two classes: those who own and control productive resources and want them operated to bring them a financial profit and the rest of the population who depend on them to live.

All governments have to give priority to profits and profit-making as this is what drives the capitalist economy. When profits are under pressure, as at present, they have to impose an added austerity on the population which inevitably brings them into conflict with them.

One of the key jobs of any government is to keep the population quiet, basically to avoid them rioting. In a developing capitalist country such as Tunisia this can’t be done without regular recourse to brute force. Which is why most of the governments of such countries are more or less authoritarian, compared, that is, with those of the more developed countries where lies and trickery generally do the job.

This situation is tacitly accepted by Western governments as they want social peace, however obtained, in the countries where they have profit-seeking investments. They need governments there that keep the people down. As long as a government does this they can expect support, as Ben Ali got from France for years. But woe betide a dictator unable to stop the population getting out of hand. He may initially continue to be supported but eventually an exit strategy will be prepared for him – exile in a country where he and his family can live off the loot all far-seeing dictators stash away.

When a dictatorship is toppled people feel empowered by what they have done but that is not enough. One demonstrator in Tunisia, asked what he expected to happen next, replied simply “I don’t care. I’m just glad to see the back of him”. But “what next?” is the key question as kicking out a dictator does not change the economic realities of capitalism – nor the repressive role of governments.

We take no pleasure in pointing out that any new government in Tunisia, even though less corrupt (or not corrupt at all) and enjoying more legitimacy, will still have to keep the population down in the interests of capitalism.

The only way the population in Tunisia, and elsewhere, can avoid having to protest at an artificial scarcity being imposed on them in a world of potential plenty is to join with workers in the rest of the world to get rid of capitalism, its class rule and its production for profit. This means making the natural and industrial resources of the Earth the common heritage of humanity. It means establishing a world without borders where the resources which already exist can be used to provide plenty for all
Posted by Imposs1904 at 10:56 AM