Between the Lines: Distorting Marx (1988) 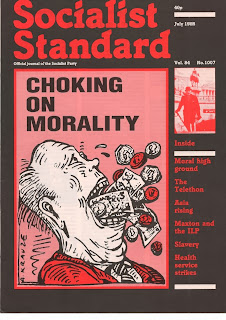 You will notice that whenever a TV company chooses to make a film about the meaning of Christianity it hires a Christian to do the explaining. Likewise, when we see TV programmes about motor cars they tend to be introduced by car drivers, not by cyclists who are fundamentally opposed to motor transport or pedestrians who have never sat behind a car steering wheel. Not so when it comes to discussing Marx. To speak about this subject on TV requires different qualifications. Marx is usually spoken about by ex-"communists" who used to belong to the non-communist Communist Party, or by anti-Marxists, or by academics who think that Marx might have been right - about some things - but then again - he might have been wrong - perhaps. In short, the one qualification which is certainly not required when it comes to discussing Marx on the telly is agreement with what the man said, less still, commitment to do anything about it.

So, the new Channel Four three-part series, The Faith of Marxism (Saturdays, 6.30-7pm) came as no great surprise. It is presented by Professor David McLellan who is described - wait for it, now - as "the world's leading Marxologue" and a "practising Roman Catholic" who was training to be a Jesuit priest and now serves as advisor to the British Catholic bishops. And who are the guests whose assistance has been solicited by this mixed-up academic to help him make his point? Firstly, Denis Healey, whose claim to be interviewed is that he used to a Marxist in the 1930s when he joined the Stalin-loving Communist Party while at Oxford University. He decided to leave because "Marx said nothing about the arts". Also interviewed in the first programme in the series (4 June) was Sir Alfred Sherman (ex-CPer and now zealous Thatcherite), a Roman Catholic ex-CPer, Ken Gill of Tass who left the CP because it didn't accept the Tass (as in Tass News Agency) line sufficiently, and Bea Campbell who is a member of the Communist Party's Marxism Today-Young Liberals tendency.

McLellan contends that Marxism is a new religion. In common with religion it has elaborate symbols (banners) and rituals (rallies); it has its Bible (the works of Marx); it settles disputes all too often by reference to the doctrinal texts; and it has its heretics, that is, those who interpret Marxism differently from the leaders. This is a fair criticism of most people who claim to stand for Marxism. It is true that Marxism has been turned into a dogmatic religion which has little to do with the intellectually dynamic and doubting approach of Marx himself. But then, as a Roman Catholic, McLellan is in no position to attack those Leftists who have made a secular religion out of fragments of Marxist thinking. Either one is opposed to religion and to dogma - as The Socialist Party is - or none favours it - as McLellan, the supporter of the Catholic catechism does. There is no particular reason why Professor McLellan, together with his invited interviewees, should not use up three programmes spouting their anti-Marxist prejudices. But when such distortion is all that TV puts out about Marx it is time to ask whether there is not a clear policy that Marx will only be represented on TV on condition that his essential ideas are distorted beyond recognition.

A few years ago McLellan was invited to debate with the present writer on the subject of what Marx really meant. He admitted then that he had learnt a lot and that he respected The Socialist Party as the only true Marxists in Britain. Not long after that the same Professor McLellan debated ina large hall in Islington against another member of The Socialist Party on the question of the relationship of religion to Marxism. In that meeting he was presented with a clear explanation of the materialist conception of history, which is the basis of the non-religious outlook of this party. Given that those two events occurred (both tape-recorded), why did McLellan not consult for interview the one political party in the country which he regards as truly Marxist and which he knows is coherently anti-religious? If he failed to call upon The Socialist Party because he knew that, unlike his chosen guests, we would shatter to pieces his thesis that Marxism is a religion, then McLellan is dishonest. If, on the other hand, he did wish to interview us - to hear our side of the argument, as good academics are taught to do before intoxicating themselves with the soundness of their own certainties - and his producers at Channel Four would not allow him to do so, we shall expect him to have the courage to admit that. This column will be sent to Professor McLellan and by his response can our readers judge him.

On the same night as McLellan's three-parter commenced, another epic of distortion, Reid About the USSR (C4, 8pm) began a series of three hourly programmes. The presenter is one Jimmy Reid, ex-Communist Party member and hero of those gullible enough to make heroes out of strike leaders. Reid now writes a column in The Sun, Murdoch's scab paper. Most of the first programme showed Reid rushing around the Russian Empire admiring the new entrepreneurial spirit of perestroika. It seems they are soon to be opening private clinics for those who can afford to buy superior health treatment, and the government is giving grants to "co-operative" businesses which are out to make profits. Reid was quite happy to describe all of this as Marxism in practice. Why not? It seems that any old fool with any old illusion is free to stand in front of a camera and describe any old dictatorship as Marxist, as long, of course, as he is an ex- pr a non-Marxist.

In its relentless urge to emulate the Gestapo, the British state put pressure on the BBC not to show the TV film Tumbledown (Monday, 31 May, 9.30pm, BBC1). The film, written by Charles Wood, was based upon the reminiscences of an army officer who had been disabled in the Falklands war. In the end the BBC succumbed to pressure and censored 12 seconds of the film - a part in which a British officer was shown to act in a reckless and cowardly fashion. Interestingly, the censors did not choose to remove the really offensive moment of the film where the officer is shown beating to death an Argentine soldier, who lay on the ground pleading for his life. This murder did actually place. The British state obviously is not ashamed of such vicious killing: indeed, the Prime Minister invited us at the time to "rejoice" in such actions, and she went on to win the 1983 election on the strength of the corpses of that slaughter.

The point of the film was to invite sympathy for this killer officer who, after having 40 per cent of his brain blown out and being disabled for life, felt cheated when he returned to Britain was was treated as an embarrassment. Such a murderer will receive no sympathy from these quarters. The film depicted him as a loathsome Hooray Henry when he was in the officer corps before the war began and as a foolishly indoctrinated state thug when he was out there. That he is now treated as a leper by those who paid him to blow people up and beat them to death is his problem. If you don't want to end up as a cripple, you don't join the war forces. Our sorrow is reserved for those wage slaves killed and maimed when they did not choose war, but have had no alternative but to fight as conscripts or fall victims as innocent bystanders. The censors of Whitehall will never succeed in stopping the horrors of war from being shown, as long as the cause of war exists the relics of war will be walking, hobbling and lying in hospital beds as living monuments to the madness of the system which the censors serve.

On This Week, Next Week (Sunday, 5 June, 1pm, BBC1) the Labour leader, Neil Kinnock, said that there is nothing wrong with the profit motive, that Labour could run capitalism well and that of course Labour is in favour of the market because it's the only possible way to distribute goods. He did not imply these ideas, he stated them, as explicitly as is possible when you are incapable of saying anything simply. He also said - quite explicitly - that there has never been anyone who has seriously advocated the abolition of the market. The Socialist Party stand for precisely that, and has shown why the abolition of the buying and selling system is the only way to achieve socialism in ways so simple that even Kinnock should be able to understand. If he would like to find out about the case for free access he should write to us and we will contribute to the early stages of his socialist education. Kinnock locks increasingly like an apprentice at the Stock Exchange - a working-class kid who's made it to an apprenticeship and is trying to impress his elders and betters that, although he still eats his peas with his knife and only went to a provincial university, he really is just the lad to run their errands and do their bidding. Neil Kinnock really is a pathetic sight - a reformist without even the rhetoric of radicalism; a jabbering repeater of Stock Market slogans. He and his party and its policy review are pathetic, intellectually empty and equipped with principles which give second-hand car dealers a bad name. In fact, has anybody thought of asking him to make a series of programmes about Marxism?
Steve Coleman
Posted by Imposs1904 at 10:14 AM