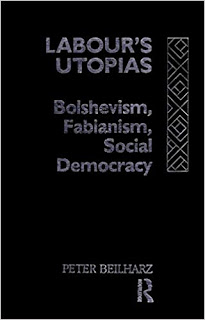 Book Review from the May 1995 issue of the Socialist Standard

If one tenth of the energy used during the last hundred years to pursue reformist dead-ends had been committed to the cause of genuine socialism our movement would today number tens of thousands. The frustration for socialists has not been simply that workers have failed to listen to us, but that all too often they have been diverted towards those who have proclaimed the cause of socialism whilst committing themselves to no more than the radical re-organisation of capitalism. Intentionally or otherwise, this is the main message of Beilharz's book: the utopians (in the philosophically idealist sense of that term) have not been those of us seeking a classless, propertyless, moneyless world where all can have free access to available resources, but the schemers and dreamers of a reformed and sanitised profit system.

The introductory chapter is disappointing in its theoretical vacuity, but there are illuminating chapters on the statist utopias envisaged by both Fabians and Bolsheviks. From Webb's London Programme to Trotsky's Literature and Revolution a vast array of extravagant hopes have been aroused for what were essentially state-capitalist visions of the future. For an account of these this book is of worth. As an account of the Socialist Party within the history of socialist thought Beilharz follows a long tradition of scholarly precedent in completely ignoring Britain's oldest existing and most politically impressive workers' party. The Lenin Award for Historical One-Eyed Blindness is presumably in the post.
Steve Coleman