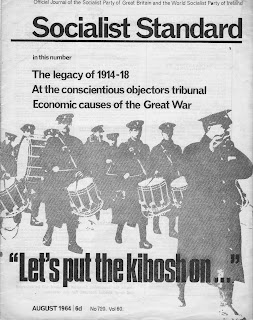 HALF a century has passed since the beginning of the FirstWorld War. In August, 1914, the Executive Committee of the Socialist Party of Great Britain issued a manifesto — "The War, and the Socialist Position."
It was discussed and agreed before being issued but the discussion was not at all about the question whether the war should be supported or opposed but about the details of the wording. The Party's attitude to war between capitalist governments did not need to be discussed; it had been decided years before at the formation of the Party. It was implicit in the Declaration of Principles which was adopted when the Party was formed and has remained unchanged, in particular in Clause 6, which reads: —


. . . the machinery of government including the armed forces of the nation, exists only lo conserve the monopoly by the capitalist class of the wealth taken from the workers. . .

The Manifesto therefore took the form of re-affirming Socialist principles including the principle on which rests the Socialist attitude to war.
It opened with the declaration: —


Whereas the capitalists of Europe have quarrelled over the questions of the control of trade routes and the world's markets, and are endeavouring to exploit the political ignorance and blind passions of the working class of their respective countries in order to induce the said workers to take up arms in what is solely their masters' quarrel.

Later on it declared that: —


as the workers' interests are not bound up in the struggle for markets wherein their masters may dispose of the wealth they have stolen from them (the workers), but in the struggle to end the system under which they are robbed, they are not concerned with the present European struggle . . .

In this Manifesto the Socialist Party of Great Britain was restating three principles which are fundamental to the Socialist case — that war is not an accidental interruption of the peaceful operations of capitalism but is inherent in the structure of the system itself; that the interest of the workers in all parts of the world is to stand together against the governments of capitalism; and that the only way to end war is to end capitalism.
In the world of 1914 the great majority of the organisations which called themselves Socialist did not accept these three principles. They did not accept that it is capitalism itself which necessarily produces the conflicts over markets, trade routes, raw material sources, etc., which engender war. Along with the naive belief that war could be " humanised " by the banning of particularly destructive weapons they thought that war could be eliminated through international agencies appealing in the name of law, humanity or religion. Adding to the confusion there was one school of thought which relied on proving to the capitalists that "war does not pay," and another — we have it still — which envisaged an international agency having armed forces to preserve peace by waging war on war-making governments.
In August, 1914, when the Socialist Party of Great Britain was issuing its Manifesto most of the so-called Socialist parties were declaring their support for their respective governments.
Because they did not accept that capitalism was the cause of the war they readily succumbed to the excuses for the war offered to them by their respective governments. In Britain it was the defence of Belgium and France against the megalomania of the German Kaiser and German Militarism, and later, "the war to end war "; or the war for democracy. In Germany it was defence against Russian autocracy and Russian "barbarism." Although all of these parties, in the second International to which they belonged, had long seen the threat coming and had even formally declared their opposition to it at the Basle conference in 1912, most of them put loyalty to "their country " first, when the war actually came. Their lip-service to internationalism had never possessed the solid Socialist basis of recognising the mutual interest of all workers against capitalism and its governments everywhere.
Those who reject the Socialist contention that the root of modern war is in capitalism have to seek other explanations. These fall into several groups — the innate aggressiveness of human nature; the acts of wicked men or their rulers; economic causes other than capitalist ones; the strength of nationalist or religious feeling; and the conflicts of ideologies.
The human nature explanation of modern war is an irrelevance. It is true that individuals along with the capacity to live peacably side by side and to show humanity and compassion, will in appropriate circumstances engage in quarrels and violence. (The "appropriate circumstances" often being features of the competitive struggle inside capitalism). But when it comes to preparation for war it is always the governments which have to set out deliberately by lying propaganda to stir up hatred of whoever happens at the time to be "the enemy," and so little do the aggressive instincts of the mass of the population cause them to rush into war that almost all of the governments in the 1914 war (and subsequent wars) had to use conscription to drag the unwilling heroes into the battle line.
The argument that wars arise from economic but not capitalist causes, rests on the fact that long before capitalism came into being, or in places where capitalism did not exist, food shortage caused migrations and consequent wars, or caused wars among tribes in adjacent areas. But this situation has little bearing on the wars between capitalist powers in the modern world. It gives no explanation for the 1914 or 1939 wars, any more than it does for the long years of cold war between the American and Russian groups. The Powers involved in the 1914 war were not faced with inability to produce enough. All of them had for years been increasing their output of all kinds of commodities. Their worry was not over production but over the sale of what they produced.
The belief that modern wars are caused by nationalist or religious differences merely obscures the facts. What happens is that when capitalist rivalries have produced clashes in which governments consider going to war, the governments then calculatedly exploit nationalist and religious prejudices in order to popularise the war and cover up the real causes. Nations and the national religions are themselves products of capitalism as Louis Boudin showed in his Socialism and War (lectures given early in the 1914 war), it was the rise of capitalism in place of the feudalism of the middle ages which necessitated the division of Europe into separate national states. "Capitalism needed larger economic units for its development. The small groups therefore began to coalesce and amalgamate into larger units which would permit the larger economic life which is the characteristic of the new era ": —


Thus arose the modern European nations, each with its own language and separate and distinct social, political and economic life : England, France, Spain, the Scandinavian countries, Russia, Italy and Germany.

This development also needed and brought about the separation of the national religious organisations through the Reformation.
The other so-called ideological causes of war fare just as badly when lined up with the facts. British propaganda in 1914 made much of German "militarism"— this was argued also by leaders of the Labour Party — but halfway through the war conscription, the major feature of "militarism " was introduced in this country and, of course, Britain's European allies all had conscript armies. Another ideological charge against Germany was her brutal treatment of populations in her African colonies; but Britain's ally Belgium had an even worse record in Africa, and the British capitalist record in their colonies was equally open to charges.
There remains the argument that wars are caused by the acts of individuals, including individual rulers. It is still possible, fifty years after, for an article in the Sunday Telegraph (28/6/64) to start off: — "Two bullets that killed the Austrian Heir at Sarajevo on June 28, 1914, started the holocaust of World War I," And books are still being published about the degree of personal responsibility of the German Kaiser Wilhelm II for the first World War.
Professor Pigou writing soon after the first World War, in his Political Economy of War, dismissed the Sarajevo incident as being the occasion not the cause of the war. It may have been "the match to the powder magazine. The real fundamental causes are there that lie behind the assembling of the powder."
The Times Literary Supplement (26/3/64) reviewing two books on the supposed personal responsibility of the Kaiser, pointed out that in effect Germany long before Sarajevo had been in what would now be called a "cold war," the stage of preparations for the eventual fighting war of 1914.
An article in the Socialist Standard in September, 1914, on the same theme, showed that for years before 1914 the British and French governments had been building up their forces and arranging for the disposition of their navies to meet the counter preparations of the German government.
The origins of that war lay in the fact that the nineteenth century industrial military and naval predominance of British and French capitalism was being challenged by the rapid expansion of Germany. As German industry grew, German production and exports were catching up and the German navy had grown to a size and striking power comparable with the British.
After the German annexation of the French provinces of Alsace and Lorraine in 1871, the way was opened for the link-up of Lorraine ore with Westphalian coal, and Germany's pig-iron production soon jumped ahead. In 1870-74 it was 1,800,000 tons a year against Britain's 6,400,000, but by 1908 German production was far ahead. The same was true of steel and the German mercantile shipping fleet was being rapidly expanded.
A warning had been given by the Commission on the Depression of Trade in its Report as early as 1886 about German competition in world markets : —


A reference to the reports from abroad will show that in every quarter of the world the perseverance and enterprise of the Germans are making themselves felt. In actual production of commodities we have now few, if any, advantages over them, and in a knowledge of the markets of the world, a desire to accommodate themselves to local tastes or idiosyncrasies, a determination to obtain a footing wherever they can and a tenacity in maintaining it, they appear to be gaining ground upon us.

An area of acute conflict was in the field of colonies. Britain and France, along with Belgium, had been first in this field, Britain in India and Asia and all of them in Africa. Germany, the late comer, seeking to enter and expand in Africa, more and more threatened the future of those who were there first and had taken most of the more profitable areas. When Germany showed in 1911, by sending a gunboat to Agadir, that she intended to get a foothold in Morocco, Mr. Lloyd George, Chancellor of the Exchequer, at once reacted with a speech threatening war. This incident had the effect of bringing French and British capitalism nearer together in mutual self-protection.
One of the more dramatic forms of the conflict was the German plan for a Berlin to Bagdad railway, a counter-blast to the British scheme of the Cape to Cairo line. The German plan involved pushing Russian influence out of the Balkans, cutting Russia off from the Mediterranean by control of the Dardenelles, and opening up a way for Germany to expand towards the Persian Gulf and India.
The 1914 war did not start overnight through an assassin's bullets; it was the outcome of years of conflicting capitalist interests.
Edgar Hardcastle
Posted by Imposs1904 at 4:41 PM

Hat tip to GCT in Denmark for originally transcribing this article. Wherever you are, Graham, thank you very much.