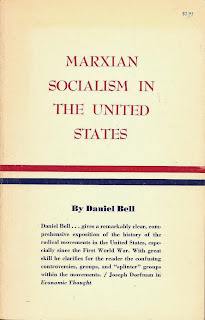 Book Review from the December 1968 issue of the Socialist Standard

This book, written over fifteen years ago, has been re-issued with a new introduction by the author. It is a history of the Socialist Party of America and the Communist Party, with a few asides on De Leon's Socialist Labour Party and on the trotskyists.

Marxist and social-democratic ideas in America grew out of the previous populist and labour union movements in the 1870's. In 1876 was formed the Workingmen's Party which next year became the Socialist Labour Party. Its ideas, partly from Marx and partly from Lassalle, were provided by refugees from Germany. Twenty years later under the influence of De Leon the SLP took a more intransigent standpoint, though even today (apart from its syndicalism) there are traces of pre-Marxist ideas like labour-time vouchers and the phrase "the full product of his labour". De Leon introduced a new—and important—suggestion into socialist discussion. He argued that a socialist party should not have a programme of "immediate demands". He also held that the ballot was the way to political power. These ideas had considerable support among that section of the Social Democratic Federation in Britain that in 1904 was to set up the Socialist Party of Great Britain.

At the founding of the Socialist Party of America in 1900 there was a group dubbed "impossiblist" because they were against a reform programme. Although there was always before the first world war a minority in the SPA who took this view the party itself never did. There was a considerable exchange of views between uncompromising socialists in America, Britain and Canada. Bell finds one of their arguments strange. He says that a new member of the SPA would, among other things, "be assaulted by 'impossiblists' who told him that a fight on taxes as a political issue was meaningless because the workers did not pay taxes". We cannot go into this here except to say that the view that taxes are not a burden on the workers was held by Ricardo as well as by Marx and Engels.

The SLP, under De Leon, had always been wrong on the union question. In 1896 they had set up "socialist" unions in opposition to the pure and simple unions of Samuel Gompers but they did give the working class movement such expressive phrases as "labour fakir (or faker)" and "labour lieutenants of the capitalist class".

The peak year for the SPA was 1912 when Debs polled six per cent of the presidential vote and one member was elected to Congress. Thereafter it was decline all the way. Many of the writers and others who had supported the party deserted to Woodrow Wilson especially when America entered the war. The SPA and the IWW, to their credit, opposed the war and were ruthlessly hounded by the government. Many of their members, including Debs, were thrown into jail. The party was by now composed largely of migrants from east Europe who in 1917 were swept off their feet by the Russian revolution. But it was 1919 before all the pro-Bolsheviks had left the SPA.

After Debs' death in 1926 the leadership of the party fell to Morris Hillquit and Norman Thomas. Thomas, a Christian pacifist and moralist, came to symbolise the SPA though there remained many like Hillquit who still claimed to be Marxists. From now on the SPA reminds you of the ILP in Britain: completely confused on every issue, suffering attacks of infiltration from communists and trotskyists, taking an equivocal position on the war, growing smaller and smaller and seeing its top-ranking trade unionists leave for other larger parties.

The Communist Party was a pathetic but at the same time a vicious mob whose anti-working class antics are well summed up by two phrases coined by the SLP (who saw through them if not through Russia): Burlesque Bolsheviki and William Zig-Zag Foster. In the thirties it attracted many famous names, though most of them could not swallow the Moscow Trials. During a patriotic phase before the war the CP tried to show it was a good old American party by praising such bourgeois heroes as Jefferson and Lincoln. After 1941 it enthusiastically supported the war, so much so that in 1944 on Stalin's orders it dissolved itself! This was later reversed and poor Earl Browder was forced to walk the plank. Towards the end of the forties the CP was persecuted and eventually driven underground. Only recently has it re-emerged to be found firmly backing the Democratic Party.

Bell's book is interesting but it should be read in conjunction with the issue of the Western Socialist (No. 4, 1966) marking the fiftieth anniversary of the founding of our companion party, the World Socialist Party of the United States, for a socialist analysis.
Adam Buick

Hat tip to ALB for the scan.