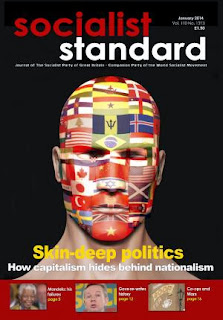 From the January 2014 issue of the Socialist Standard

No one can accuse Nelson Mandela of not having the courage of his convictions. Twenty-seven years in prison for campaigning to replace the repulsive apartheid regime with a non-racial political democracy is sufficient proof that he had. Yet, although this was eventually achieved, it did not improve the economic lot of the vast majority of black South Africans, another of his aims.

At his trial for treason in 1964 along with other leaders of the ANC, Mandela declared that he was a ‘socialist’. This simply meant that he shared the views of other ‘national liberation’ leaders of the time such as Nkrumah and Arafat who were grateful for the support of the state capitalist regime in Russia and admired its economic system. After the collapse of Russian state capitalism Mandela’s ‘socialism’, as that of the ANC, was reduced to a commitment to government intervention to try to improve people’s standard of living, the classic reformist position.

As the first President of post-apartheid South Africa from 1994 to 1999, Mandela tried to implement this but came up against capitalism and its economic laws and vested interests. He found himself the head of a government that had to operate within the confines of capitalism, but no government can make capitalism work in the interest of the majority. He was therefore forced to govern on its terms. Which are that priority has to be given to profit-making and that anything that goes against this, such as taxing profits to pay for social reforms, risks provoking an economic slowdown and yet more unemployment and misery.

Mandela had to let the big mining corporations operate as usual. They too had in fact been opposed to apartheid as it was impeding the normal operation of capitalism in South Africa. They wanted, and got, a non-racial capitalism. Capitalist firms don’t care about the background of their workers, only that they produce profits for them. In South Africa they didn’t like being legally forced to employ an underperforming white worker at higher pay when more competent and cheaper non-whites were available.

It wasn’t just the mining corporations that benefitted from the end of apartheid. So did non-white business and professional people who, as the ‘black bourgeoisie, were integrated into the ruling class and its benefits and privileges. Far be it from us to underestimate the psychological and practical benefits of the abolition of separate facilities for ‘Blanke’ and ‘Nie Blanke’ for those who were its victims, but the fact remains that the end of apartheid has not benefitted the mass of South Africans economically. But that’s because it was replaced by a non-racial capitalism and capitalism in whatever form was never going to work to help them.

So, in this sense Mandela failed. He did not, however, succumb to the corruption of a Nkrumah or an Arafat (not to mention the present South African president Zuma). But that proves the point. Not even a saint can make capitalism work other than as a profit-making system in which profits have to take priority over people. Reformist governments fail, not because their members are corrupt or sell-outs or incompetent or not determined enough but because they have set themselves the impossible task of trying to make capitalism work in the interests of the majority. As Mandela found out, no doubt to his disappointment.