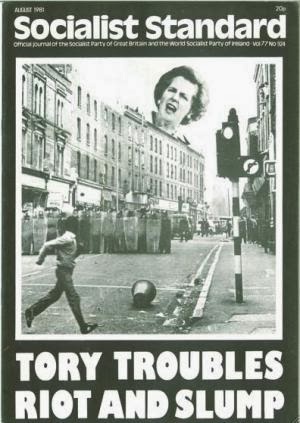 
To some people politics is like a football match. Choose your team, then spectate from a distance. Cheer, boo, jump, shout. Up the Arsenal; Vote, Vote, Vote for Maggie—or Michael—or David Roy. Red scarves for the prolies, blue cravats for the gin and mortgage set. Political allegiances flow predictably from the "I've always voted Labour and I always will" of the trade union hack, to the "I'm Tory and proud of it" of the wage slave with one foot in the capitalist class and the other on a banana skin.

When a keen young man with a sociology degree and a clip-board stops you in the street and asks how you'll be voting in the next election, have you ever tried explaining that you are a socialist and there is no slot for you on his printed card? He tries to tick Labour, but you grab his arm. "A socialist", you insist. Not a supporter of state capitalism, of incomes policies, of sending in troops to break up strikes, of partnerships between bosses and workers. Not the Labour Party: I am a real socialist. Eyeing you up and down with suspicion and memories of his idealistic undergraduate youth (he is twenty six), the questioner starts to place his tick in the Communist Party slot. Catching your stare, he stops, crossing out his misplaced tick as he hears your rejection of Russian dictators, production for profit and "socialist armies". Exhausted, he makes for the "Won't Vote" slot. But socialists do vote. Even if there is not a socialist candidate, we write "socialism" across our ballot papers to show what we stand for. We cast our vote for the only political interest which the working class has. Confused sociologist makes his way home with the socialist placed in the slot labelled "Others". If you dissent from the fifty seven varieties of anti-socialism you are an "other" and if you conform you are a "same". It would be easier of elections were simply held between Sames and Others; but then, if all teams wore the same coloured shirts what would be left for the spectators to cheer?

All of this opposition can be summed up in one short sentence: Socialists are totally opposed to capitalism. We are hostile to it; we hate it; we stand solely for ending, and not mending, it.

Socialists are uncompromising. We will only support a party which stands unequivocally for world socialism. In Britain the only such party is the Socialist Party of Great Britain. As revolutionaries we can have nothing but enmity to reformists, even though we may well understand their good intentions. As opponents of the profit system we oppose all who say that production must be for profit. As democrats we reject anyone who poses as a leader for working class sheep to follow. As workers we will have nothing to do with those who aim to disguise the antagonism of interests between the capitalists as a class and the workers as a class.

Sometimes principled refusal to compromise for the sake of popularity is labelled sectarianism and hostility to our opponents is mistaken for senseless aggression. So let it be clear: the Socialist Party is for working class unity—but we can only join together with our fellow workers on the basis of unity of principle. Our hostility to all other political parties is to their ideas and not to individual workers within them. It is not our aim to alienate misguided wage slaves by abuse, but to attack their present ideas so as to direct them to more useful ones.

There can be no socialist revolution without socialists. Unless a majority of workers give up their adherence to a system which enslaves them and deprives them of the fruits of their labour there can be no fundamental social change. The political revolution must be preceded by a mental revolution in the way that men and women see the world. To effect that revolution, workers must cross from the spectators' stand to the pitch. Actively, indignantly, consciously and democratically, we must score our own goal and defeat the enemy. To do that we need a party which is committed to that goal and nothing less.
Steve Coleman
Posted by Imposs1904 at 6:19 PM

"To effect that revolution, workers must cross from the spectators' stand to the pitch. Actively, indignantly, consciously and democratically, we must score our own goal and defeat the enemy."