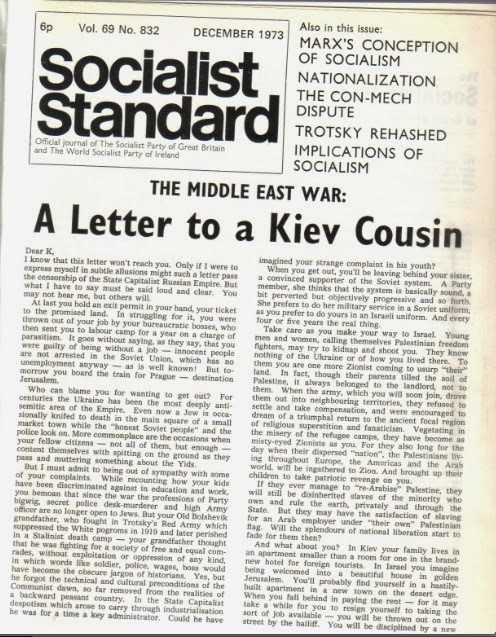 From the December 1973 issue of the Socialist Standard

I know that this letter won't reach you. Only if I were to express myself in subtle allusions might such a letter pass the censorship of the State Capitalist Russian Empire. But what I have to say must be said loud and clear. You may not hear me, but others will.

At last you hold an exit permit in your hand, your ticket to the promised land. In struggling for it, you were thrown out of your job by your bureaucratic bosses, who then sent you to labour camp for a year on a charge of parasitism. It goes without saying, as they say, that you were guilty of being without a job — innocent people are not arrested in the Soviet Union, which has no unemployment anyway — as is well known! But tomorrow you board the train for Prague — destination Jerusalem.

Who can blame you for wanting to get out? For centuries the Ukraine has been the most deeply anti-semitic area of the Empire. Even now a Jew is occasionally knifed to death in the main square of a small market town while the "honest Soviet people" and the police look on. More commonplace are the occasions when your fellow citizens — not all of them, but enough — content themselves with spitting on the ground as they pass and muttering something about the Yids.

But I must admit to being out of sympathy with some of your complaints. While recounting how your kids have been discriminated against in education and work, you bemoan that since the war the professions of Party bigwig, secret police desk-murderer and high Army officer are no longer open to Jews. But your Old Bolshevik grandfather, who fought in Trotsky's Red Army which suppressed the White pogroms in 1919 and later perished in a Stalinist death camp — your grandfather thought that he was fighting for a society of free and equal comrades, without exploitation or oppression of any kind, in which words like soldier, police, wages, boss would have become the obscure jargon of historians. Yes, but he forgot the technical and cultural preconditions of the Communist dawn, so far removed from the realities of a backward peasant country. In the State Capitalist despotism which arose to carry through industrialisation he was for a time a key administrator. Could he have imagined your strange complaint in his youth?

When you get out, you'll be leaving behind your sister, a convinced supporter of the Soviet system. A Party member, she thinks that the system is basically sound, a bit perverted but objectively progressive and so forth. She prefers to do her military service in a Soviet uniform, as you prefer to do yours in an Israeli uniform. And every four or five years the real thing.

Take care as you make your way to Israel. Young men and women, calling themselves Palestinian freedom fighters, may try to kidnap and shoot you. They know nothing of the Ukraine or of how you lived there. To them you are one more Zionist coming to usurp "their" land. In fact, though their parents tilled the soil of Palestine, it always belonged to the landlord, not to them. When the army, which you will soon join, drove them out into neighbouring territories, they refused to settle and take compensation, and were encouraged to dream of a triumphal return to the ancient focal region of religious superstition and fanaticism. Vegetating in the misery of the refugee camps, they have become as misty-eyed Zionists as you. For they also long for the day when their dispersed "nation", the Palestinians living throughout Europe, the Americas and the Arab world, will be ingathered to Zion. And brought up their children to take patriotic revenge on you.

If they ever manage to "re-Arabise" Palestine, they will still be disinherited slaves of the minority who own and rule the earth, privately and through the State. But they may have the satisfaction of slaving for an Arab employer under "their own" Palestinian flag. Will the splendours of national liberation start to fade for them then?

And what about you? In Kiev your family lives in an apartment smaller than a room for one in the brand-new hotel for foreign tourists. In Israel you imagine being welcomed into a beautiful house in golden Jerusalem. You'll probably find yourself in a hastily-built apartment in a new town on the desert edge. When you fall behind in paying the rent — for it may take a while for you to resign yourself to taking the sort of job available — you will be thrown out on the street by the bailiff. You will be disciplined by a new boss, preached to by new politicians, led to the slaughter by new generals. Your freedom will consist in the bailiff, boss, politician and general being Jewish. You will no longer be suspected of disloyalty, unless you "act against the Jewish nation" — but you will learn to shun others as alien.

You know that the fourth major Middle East war, the worst yet, is in progress as I write. It began as I set out on a week's coach tour of Italy. The idyllic Isle of Capri used to be an exclusive resort of the capitalist class — a small fortune (tens of thousands) is still required as a condition of residence, but recently they have let in a few package tourists. The group I was in was among the first to be granted this honour.

A few hundred miles across the Mediterranean I knew that relatives of mine on one side, and friends on both sides, were killing one another on the blazing hot sand, strewn with metal wreckage and human carrion. I'm boycotting newspapers until the end of the war, but headlines are written on the news-stands which I can't help seeing. Like "human wave attacks". Think what that means.

In my mind the war means mainly the Sinai front. This is the front I've heard people speak of. Three Cairo students I knew at university are there — if not already dead. With one I never discussed politics. The second was cynical. The third (in private) sympathised with Israel. He had an extensive knowledge of Jewish history, told me that Egyptian soldiers taken prisoner by the Israelis were so impressed by their treatment that they refused to fight them again. My Israeli friends, those still alive, are in that minority which sympathises more or less openly with the Arabs. From them I have heard stories of Israeli torture prisons, of Israelis who have openly boasted how they blew up Iraqi synagogues in order to stampede the oriental Jews into Israel. Then there's the persecution of Copts and dissidents in Egypt, the Nazis working there . . .

Recently a young drifter in Libya, unable to hold down a job, concerned with the plight of the Libyan Jews, wanting to show the Israelis that not all Arabs want to throw them into the sea, hijacked a plane and took it on a personal peace mission to Tel Aviv, where he is now safely in prison — thinking what? Ghaddafi and Golda Meir were for once in agreement in diagnosing him insane. They should know. And the furore in Israel over two elite paratroopers who, sensitive to the position of Arabs inside Israel, spied for Syria! These people reverse the usual illusion, and make of the "enemy" country their ideal homeland. They have resisted the conditioning to which their fellows succumb. As their experience broadens, we can hope they will reach a more Socialist position — a plague on both your houses!

Back on Capri. A fellow traveller — mild-mannered and chivalrous, the perfect English gentleman — comes up: "You're Jewish, aren't you? Is the war going well? I hope your side is winning."

"I don't. Since when do wars go well? Whoever wins, my side loses."

This reply confused him. It took him several seconds to close his mouth. This same man, in a conversation about pollution, commented within earshot of coloured fellow tourists — "On the subject of pollution, what shall we do with our coloured friends who are polluting the country?" Perhaps he was considering gas chambers. But he was very embarrassed when challenged. There's hope for Socialism yet.

Arriving back in England, the driver of the bus taking us from the airport to the terminal treated his passengers to an analysis of world affairs. Passing through a Jewish area he commented: "All these Israelis have gone to fight their war. I hope they win it soon, or we're bound to get dragged into it. And they can stay there, as far as I'm concerned." Perhaps my astonishment was the product of a sheltered life?

There is no need for me to expose the mythical and unscientific nature of nationalist ideologies in the Middle East. The Jewish Zionists debunk the Arab Palestinian "Zionists" with excellent scholarly analysis, and vice versa. Literature available from the Al Fatah office, Zionist bodies and so on.

Until the hold of nationalist and racist poison on the minds of the world's workers is destroyed, it will not be possible to live the full and satisfying life of Socialism. Stand up for yourself as a human being and fight for the only worthwhile end — the achievement of a free humanity. And when you come to Western Europe, why not stay rather than go on to Israel? Corpses in the sand cannot, among other things, work for the Socialist revolution.

Thanks to ALB for the scan.

I think the fairly sympathetic representation of the IDF would be expressed very differently these days after the Lebanon invasions and the massacres conducted by the Fanagists under Israeli control. Just today we have this report of the brutality of the Israeli police
http://www.aljazeera.com/indepth/features/2014/02/new-report-details-brutal-israeli-policies-2014226121639588738.html