Is it Better to be Exploited by One’s Fellow-countrymen? (2014) 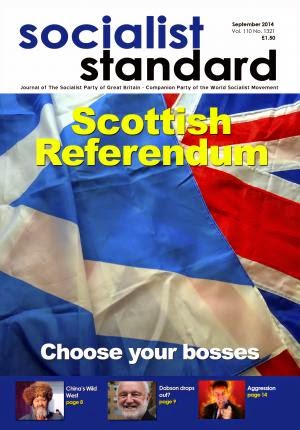 Editorial from the September 2014 issue of the Socialist Standard

‘If they speak consciously and openly to the working class, then they summarise their philanthropy in the following words: It is better to be exploited by one’s fellow-countrymen than by foreigners.’ (Marx, 1848)
A separate parliament in Scotland would be a capitalist parliament. It would not provide Scottish workers with any greater control over their own lives. Scotland would remain an integral part of international capitalism. An Edinburgh sovereign parliament will leave the workers in exactly the same position as before.


Scottish nationalism is the reaction of one section of the Scottish capitalist class to what they perceive as the declining fortunes of British capitalism and their ‘unequal’ treatment within it. They seek to keep the taxes on North Sea oil revenues and create a corporate tax structure more suited to their own needs. The SNP advocate industrial harmony and an end to class conflict. They entice Scottish workers with offers of a reformist programme and wild promises of more money and a better life. But no natural resources will be put to a sensible or beneficial use until the working class itself has gained control over the use of these valuable and non-renewable resources.
The question of independence threatens relations between English/Welsh and Scottish workers. Scottish workers are asked to place their trust in the local employing class rather than in unity with other workers. United working-class action cannot be easily achieved by insisting that there are supposed national differences in consciousness that distinguish Scottish workers from, say, their English brothers and sisters. And certainly it is not aided by combining with particular Scottish bosses, which lead Scots working people to identify with Scottish businessmen and landowners on the basis of shared ‘nationality’.
Working class unity enables us to combine our tactics for defending our class with the strategy of liberating our class. Socialists do not fall into the trap of the ‘progressive’ facade of nationalism. The success of the right-wing Ukrainian and Russian nationalists shows the danger of believing that radical nationalist slogans always lead to radical results. Scottish nationalism does not strengthen the campaign for socialism or create a united, class-conscious working class, but fragments and weakens it.
To those who are in the ‘Yes’ camp, we are saying independence will not improve your condition one iota. Only class struggle could do that and only with difficulty. Any success or otherwise of any workers’ movement in Scotland depends on close ties with similar movements in England (and elsewhere). At the same time, we are not defending ‘British nationalism’ and the unity of the United Kingdom in any way. That would be an endorsement for the status quo, something we do not support. So we do not argue that the present constitutional arrangement benefits ordinary people either. The liberation for Scottish workers can only come about by overthrowing capitalism itself. If this is not done, no amount of separatism can ever succeed in bringing freedom. Instead of tragically wasting time fostering nationalism, workers should be struggling for a socialist society without national borders.
'Because the condition of the workers of all countries is the same, because their interests are the same, their enemies the same, they must also fight together, they must oppose the brotherhood of the bourgeoisie of all nations with a brotherhood of the workers of all nations.'- Engels, November 29, 1847.
Posted by Imposs1904 at 8:52 AM