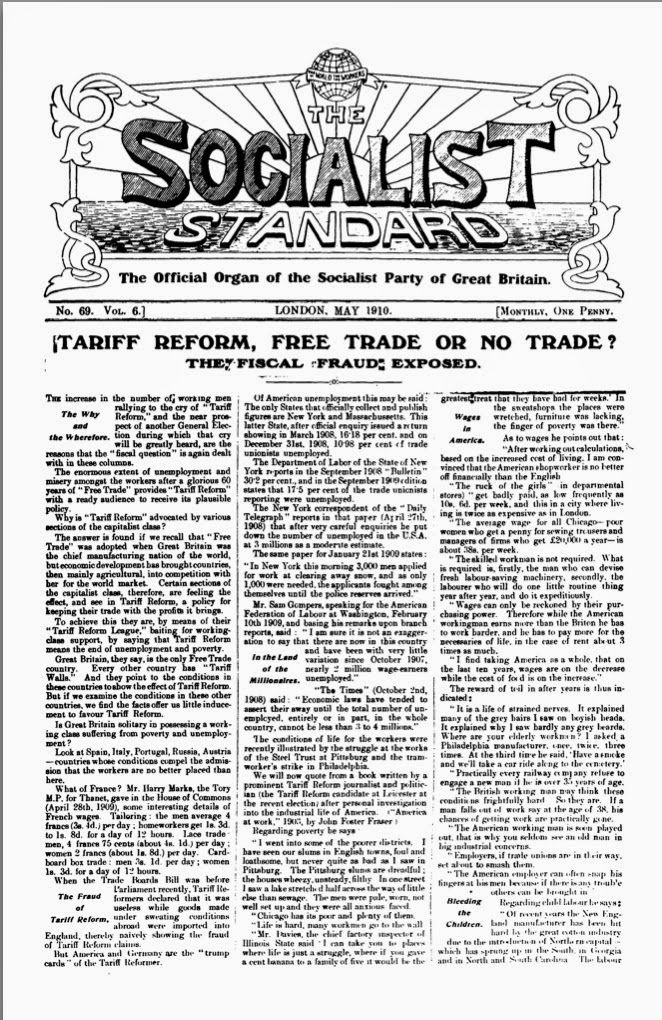 From the May 1910 issue of the Socialist Standard


With the opening of the summer propaganda season, comrades are urged to redouble their efforts. The Party's success continues to inspire enthusiasm in its adherents and dismay among its detractors—this is as it should be. Let the battle be engaged all along the line. Raise the circulation of the Socialist Standard to 10,000 monthly before the season closes and justify your existence.

A branch of the Party has been formed at Woolwich and Socialists living in the neighbourhood should immediately get into communication with Geo. Ayres, 452, Woolwich Road, Charlton, who is acting as local secretary.

A branch has also been formed at Worthing, near Brighton, for details see Branch Directory.

Socialists residing in or around Surbiton are requested to communicate with Wm. Tolton, 50 Douglas Road, Surbiton, with a view to forming a branch there.

While speaking for the Social-Democratic Party at Nottingham recently a Mr. Carmichael of Battersea, London, was somewhat severely tackled by our comrades there. He then threw out a challenge to debate the claim of the S.P.G.B. to the confidence of the working class. Previous experience of S.D.P. bluster led our comrades to request Mr. Carmichael to put the challenge in writing—a thing he declined to do, asserting that he had already issued similar challenges to the S.P.G.B., and it had failed to take them up.

He further stated that if we wanted him we knew where to find him—he was so well known! Exactly, we do know where to find him; and this is to tell him that his statement given above is simply untrue. The only occasion known to us when Mr. Carmichael issued such a challenge was on Sunday, 27th September, 1908. It was at once accepted on behalf of the Party, and our representatives was appointed. Then followed a correspondence culminating on 21st of October in Mr. Carmichael writing that his branch had decided that unless admission was restricted to members of Socialist organisations they should take no part in arranging the meeting. There the matter rests. When Mr. Carmichael can get his party to endorse his publicly uttered challenges he will not have to wait long for our representative. With Mr. Carmichael, or anyone else, representing the S.D.P., we will willingly arrange a debate, but Mr. Carmichael representing Mr. Carmichael must be satisfied to occupy our platform on the ordinary conditions. At all our meetings opposition is welcomed by our Socialist Dreadnoughts. Were the stipulation of Mr. Carmichael's branch accepted there could of course be no debate, as it would rule Mr. Carmichael himself outside.

Writing of debates, the encounter between Mr. Percy Alden, M.P. and our comrade Anderson duly came off on the evening of April 1st, and proved a huge success from our point of view. The hall was crowded and many hundreds unfortunately were turned away, the doors having to be closed before the advertised time of opening the debate. The collection taken up was more than sufficient to cover all the expenses of the meeting. The debate was extensively reported in the capitalist Press, from which we quote the following. "The very spacious hall of the Earlsmead School, Tottenham, was densely crowded on Friday night, the attraction being a public debate on 'Is the Liberal Party deserving of the support of the Working Class?' Mr. Percy Alden, M.P. took the affirmative, and the opposer was Mr. A. Anderson, of the Socialist Party of Great Britain . . . No resolution was put to the meeting on the question debated, but the feeling of those present was obvious in the course of the speeches, Mr. Anderson coming in for considerable applause, and Mr. Alden's statements being greeted often with derision."

Another splendid piece of propaganda work was the occasion of the Celebration of the Commune of Paris. A largely attended and enthusiastic meeting was held in the Caledonian Road Baths, North London, on March 21st. The meeting reflected credit upon the activities of our Islington members.

A quick note about the Social-Democratic Party mentioned in the article.