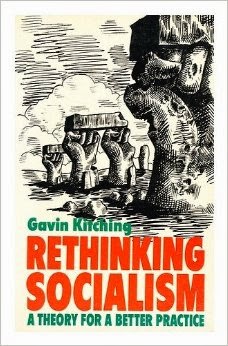 The title of Gavin Kitching's book would allude more accurately to its contents, if instead it were titled Rethinking Capitalism. This is a miserable book of appalling ignorance which most seriously ignores any sensible idea of what socialism is and therefore any sensible way of achieving it.

It has been suggested that one of the reasons capitalism lasts is that people on "the left" and particularly the Labour Party, keep trying to patch it up and make it work. This book is just such a set of suggestions. Kitching points out that "left wing" politics and trade union occupy a negative position, and this is seen by many people as being destructive. He says for example that strikes and  the chaos they can bring with them, particularly in a position where workers face mass unemployment are futile and easily construed by a hostile media as irresponsible and damaging to the "community".

There is nothing new in this. Workers are forced, under capitalism, to fight the same battles over and over again without resolving issues, and inevitably this aggravates chaos. It has been a great pity that those who formed the Labour Party at the turn of the century did not take heed of this when they pursued the false idea that socialism could be advanced within the economic framework of capitalism. Nor is there any excuse now for Kitching experiencing the belated revelation that "If the bosses don't have the money, they can't pay, can they? If they are making losses, they must lay off, mustn't they? Yes they must".

What is the logic of this in terms of the establishment of socialism? Gavin Kitching should learn from the Socialist Party the arguments which outline the political limitations of social reform which follow from the economic limitations of capitalism in general. If he comes to understand this he will have the weaknesses of working class action within capitalism in clearer perspective.

To speak of the limitations of working class action is to lay this down only within the productive relations of capitalism. Outside this, the working class has immense power. This is the practical responsibility and the power to change society. Workers already run the apparatus of production, produce goods and maintain services, but they do it for the capitalist's profit. The straightforward issue which should be kept crystal clear is that socialism is nothing less than the working class taking over the entire apparatus of production and the earth's resources and organising production solely for need.

On the basis of common ownership and production for use socialism could immediately find the freedom to expand all its activities in response to need.

Gavin Kitching's response to the present depression and the difficulties that workers face rests on the retention of capitalism and on this basis he suggests a formula for what he terms "pre-emptive unionism". This amounts to workers foreseeing that certain branches of industry could get into difficulties and then co-operating with the employers to work for the smoothest economic adjustments in exchange for concessions including, for example, high redundancy payments, retraining schemes, housing and removal allowances, capital grants for the setting up of new industries, workers' delegates on boards of directors, some control of over management appointments, profit sharing schemes. This is the message of despair which provides as much hope as would advice to the condemned man that he should help organise his own execution in exchange for an "easier" time.

The re-organisation of capitalist industry under the blind dictates of the market and profitability is not a working class issue, and is the surest guarantee of continuing social problems. For the workers to concede continued ownership and control of the means of life to the capitalists spells out disaster.

While Gavin Kitching's book is useless as a work of practical socialist politics it does provide some evidence of the actual political role of the Labour Party. He is committed to what he sees as "the evolutionary and gradualist perspective", which is a euphemism for the abandonment of socialism. He is also committed to the "social and political struggle" which centres on "continuous social conflict".

Capitalism inevitably produces conflict but socialism is not a commitment to "continuous social conflict". On the contrary, socialism is the practical solution to social problems which envisages the speediest end to social conflict. The means by which a majority of socialists could end capitalism and organise society for need are more straightforward and practical than any of Kitching's recipes for continuous conflict.

So is the lure of the Labour Party partly the lure of this "struggle"? Is this struggle so blindly pursued; and is its object so lost in obscurity and mystification that it has become an end in itself? It is hardly imaginable that Labour Party confusion about what socialism means could be further compounded. however, Gavin Kitching contributes this book as an effort to do so. Inevitably he returns to the hopeless negativism from which he apparently first set out to escape - back to the treadmill of self-repeating "struggle".

Do the activists of the Labour Party avoid useful knowledge and shrink from the responsibility of solving problems because they prefer "the struggle" and the negative sectarianism of the broad Labour Church? If so, there will be a ready demand for this book.