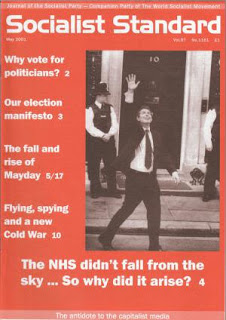 From the May 2001 issue of the Socialist Standard


Should we vote in a new government? Or should we link up with the struggle to usher in a democratic society?

We are being asked to elect a new government through what is said to be a democratic process. It is true that the vote, together with other hard-won rights such as the rights of assembly, political organisation and free expression, are most important. But can the act of electing a government result in a democratic society?
To govern is to direct, control and to rule with authority. Operating as the state this is what governments do. But to say that democracy is merely the act of electing a government to rule over us cannot be right because democracy should include all people in deciding how we live and what we do as a community. Democracy means the absence of privilege, making our decisions from a position of equality. Democracy means that we should live in a completely open society with unrestricted access to the information relevant to social issues. It means that we should have the powers to act on our decisions, because without such powers decisions are useless. So, be it Labour, Liberal, Tory or rule by any other kind of government, how does the operation of the state measure up to what socialists argue should be a democratic society?
For socialists the rule of government can never be democratic. Though it may include some incidental functions arising from the needs of people the main work of the state is the running of class-divided society; a system of economic exploitation. In the main governments work for a privileged section of society. They make the laws which protect the property rights of a minority who own and control natural resources, industry, manufacture and transport. These are the means of life on which we all depend but most of us have no say in how they are used. Behind Parliament governments operate in secret. They are part of the division of the world into rival capitalist states. With the back-up of their armed forces they pursue national capitalist interests. Though the politicians who run it may be elected, the state is the opposite of democracy
Production is owned and controlled by companies, some of them multinational corporations with massive economic power making the decisions on what should be produced for the markets for sale at a profit. Through corporate authority they decide how goods should be produced and the conditions in which work is done. Again, this is the opposite of democracy
Real democracy


So, how would democracy be fulfilled in socialism? This requires the abolition of the state and its replacement by a system of democratic administration. This can only work from a basis of common ownership and production solely for use. Common ownership means that all people throughout the world will stand in equal relationship with each other. This will be an association of all men and women making the decisions and co-operating to produce goods and organise communities in their mutual interests.


The democratic organisation of all people as citizens of the world would need to operate through different scales of social co-operation. Locally, in town or country, we would be involved with our parish or neighbourhood. Even now, there are many thousands of men and women throughout the country who work voluntarily on parish and district councils and in town neighbourhoods for the benefit of their communities. But these efforts would be greatly enhanced by the freedoms of a society run entirely through voluntary co-operation.
Such local organisation would be in the context of regional co-operation which could operate by adapting the structures of present national governments. Whilst some departments such as Inland Revenue and the Treasury, which are essential to the state would be abolished, others like Agriculture and the Environment could have an important job to do, especially in the early days of socialism. Such structures - adapted to the needs of socialist society - could be part of regional councils and would assist in the work of implementing the decisions of regional populations.
During the early days of socialism it is likely that the organisation of world co-operation would need to take place through a world council. Because the things we need now are produced and distributed through a world structure of production, and because its present capitalist nature has brought about immense problems, action to solve them would be required on a world scale, For example, it would be a priority to set up an ecologically benign world energy system as soon as possible. Similarly, the countless millions of people suffering from hunger and desperate poverty would need a considerable increase in food production. For this work the Food and Agricultural Organisation of the UN would at last be able to use its expertise and knowledge of world conditions to help with solving the problems of malnutrition. Again, to begin with, people in socialism would face a huge task in providing every person with secure and comfortable housing. This would call upon the efforts of communities throughout the world, especially in those regions where means of production were well developed. Such world projects could be co-ordinated through appropriate departments of a world council.
When we propose different scales of social co-operation such as local, regional and world scales, this is not a question of there being a hierarchy with power located at any central point. What we anticipate is both an integrated and flexible system of democratic organisation which could be adapted for action to solve any problem in any of these scales. This simply takes into account that some problems and the action to solve them arise from local issues and this also extends to the regional and world spheres.
Carrying out decisions


Crucial to the question of democracy is not just the ability to make decisions about what to do but also the powers of action to carry out those decisions. For many years, capitalist politicians seeking office have promised to solve the housing problem together with the problems of poverty, unemployment, pollution, crime, the health service and many more. They have failed because in fact they seek to run a system driven by profit, which imposes severe economic limitations on what can be done and which as a result cannot be rationally controlled. This makes a mockery of the idea of democracy. But with the abolition of the market system, communities in socialism will not only be able to make free and democratic decisions about what needs to be done they will also be free to use their resources to achieve those aims.


The apologies that we hear almost every day from capitalist politicians that they lack the money resources to solve problems indicates how completely the fetishism of money has distorted their thinking. In fact problems are not solved with money resources. They are solved by people using their labour, skills and the necessary materials and there is in fact an abundance of these material resources. But it will take the relations of common ownership to release them for the needs of communities and this will also mean that communities will be free to decide democratically how best to use those resources.
The corporate authorities or managerial systems which now dictate how production units such as factories or services should be run would be replaced. Small units could be run by regular meetings of all the workers. In the cases of large organisations these could be run by elected committees accountable to the people working in them. In this way, democratic practice would apply not just to the important policy decisions that would steer the main direction of development, it would extend to the day-to-day activities of the work place.
But democracy would not be confined to the serious work of production and the running of the work place. People in socialism will be free to create sporting and other cultural festivals. The entertainment of visitors from other parts of the world would bring diversity and richness to local life. The possibilities for decision making and the planning and enjoyment of such events are endless.
Socialism opens up a great range of new possibilities. With the populations of all countries co-operating as one people, working together in their common interests whilst celebrating their cultural differences and joining in democratically deciding a new future, the prospects can only be seen as exciting. What a contrast with the dreary prospects of electing yet another capitalist government and giving a further lease of life for an out-dated capitalist state.
Pieter Lawrence
Posted by Imposs1904 at 6:46 PM

Email ThisBlogThis!Share to TwitterShare to FacebookShare to Pinterest
Labels: Democracy, Government, May 2001, Pieter Lawrence, R2001, Socialism as a Practical Alternative