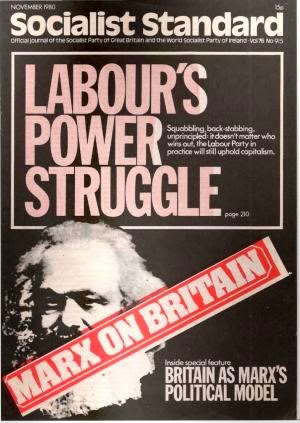 From the November 1980 issue of the Socialist Standard

Samuel Butler's biting satire Erewhon (an anagram of "nowhere"), published in 1872, describes the sort of society found by the narrator in a remote mythical land in the Antipodes. A curious feature of erewhonian culture was its paradoxical reversal of moral values. For example, a physical ailment such as pulmonary consumption was punished as a crime while embezzlement called for condolence—for the embezzler!

Now you might wonder why on earth such a piece of fiction, fascinating though it may be, should be mentioned in a no-nonsense political journal like the Socialist Standard. Well fact can sometimes be stranger than fiction — certainly as far as politics is concerned.

One of the more amusing cliches our politicians are prone to using is that little gem: "the Real World". Presumably it is intended to reflect upon themselves as hard-headed, realistic people grappling with complex social issues in a cool, commonsense fashion. Invoking the "Real World" in political debate is rather like invoking "God" or "Allah" in some Holy War: it has a definite propaganda value, both for self defence and to discomfort one's enemies. Thus it can serve, for example, to rationalise and excuse the politician's failure to "deliver the goods" by suggesting that the "Real World", with its rising oil prices and cheap foreign imports, is rather more refractory and unyielding than they had bargained for. On the other hand. it enables them to dismiss their opponents' views as unworkable, utopian and out of touch with that "real world" which they with their vast experience in repeated political failures and broken pledges, are so intimately acquainted with.

A few months ago, ex-MP Shirley Williams was caught in the act, exposing the machinations of her politician's mind to readers of the Guardian (May 19). She complained of the way in which the image and reality (of politicians) are constantly confused by the media—a somewhat odd complaint from a political conjuror whose profession is so vitally concerned with the creation and manipulation of images—of themselves, their opponents or their scapegoats.


Through television, they (politicians) become images—actors in some drama called politics—and the fact that they are real men and women operating in a real world is easily obscured.

Ah, that quaint little cliche again! But possibly Williams is obscuring a fact or two here herself about the nature of the "Real World"? Consider the reason she gives for her concern over the media: "Democracies die unless people have some trust in those they elect to represent them and to lead them." In her view the media tends, in certain ways, to undermine this trust.

What she is suggesting is that democracy hinges on the apparent conduct of leaders. Presumably them if a leader chose to flout the wishes of the electorate and thus undermine their trust, he or she would be able to get away with it either because public opinion would be compelled to adapt itself to undemocratic views or it counts for nothing anyway and can be safely ignored. Either way such a view implies that society is like putty, to be moulded at will by a few prominent individuals or "great men". Why, in that case, bother about the whole rigmarole of democracy, one might well ask?

This is indicative of the contempt in which politicians hold us. We count simply as voting fodder to be cynically used in the game of power politics, incapable of creative self-assertion, of democratically organising ourselves without patronising politicians seeking our "trust". They are the most ardent devotees of the "great man" theory, in their assessment of fellow leaders. In their generous claims as to the historic significance of some public figure they flatter themselves in the knowledge that they out in a similar role.

The "great man" theory, however is based, in Plekhanov's words, on an "optical illusion". Great men are themselves the products of the sort of society they live in, of given social forces that are used by them to effect social change. Whatever influence their personalities have it is exercised within these fundamental constraints. Is it really surprising then, given the basic lack of democratic control over social affairs in capitalism, that this should be reflected in the inflated, grandiose images political leaders have assumed, images whose source—society itself—they seek to play down by attributing their stature to qualities vested in their own personalities. The fact that they seek mass mass support, disposes of such pretensions as fiction but ironically it is on the strength of such fictions that they solicit support. What else could the call for a "strong leader" be?

No matter. The fantasies of politicians would be of small account except for the fact that they are shared by the working class—without whose support the politicians would not be in power—and are reflected by and through the media, which cannot be blamed for any lack of trust the public feels towards its "leaders". The leaders themselves invite the distrust and cynicism by entertaining illusions about their capacity to solve capitalism's inevitable problems. Illusions that are without foundation in the "real world".

This problem of credibility the leaders attempt to overcome by the tactic of finding some readily recognisable scapegoat for society's ills. The more credible the scapegoat, the less incredible will seem the politicians' claims to be able to legislate away those social ills in the face of their continuation, or even aggravation.

Take for example the problem of inflation, which has greatly concerned our political masters in the post-war era—particularly since the early seventies. The search for a scapegoat has inevitably focused on the working class. Typical of the sort of view expressed on the matter was Jo Grimond's contribution to a Commons debate on the cost of living: "When production hardly rises, pay increases inevitably lead to inflation. That is not the discovery of Professor Friedman but commonsense" (Guardian, 15 April).

In other words, "greedy workers" are to blame—despite the fact that between 1850 and 1892 average wages rose by 62 per cent (Study of Prices Lawton and Crowther) while prices fell by 8 per cent—in defiance of the "laws of commonsense", it would seem.

Others can be more blunt in their criticism. Recently the "Iron Lady" herself, before an assembled conference of several hundred well-heeled and rather indignant Tory women, rounded on workers putting in for high wage claims and behaving "selfishly". It is curious that a believer in the market economy's capacity to perform wonders by motivating individuals on the basis of competitive self-interest, should reproach workers for behaving accordingly. And this from someone who is forever talking about the need to give workers "greater incentives" (which on the face of it, is what a large pay rise would presumably provide)—that is, to stimulate what she and those who think like her would call "greed".

But moralising is not restricted to avowed defenders of capitalism. The saying that the Labour Party owes more to Methodism than to Marxism, probably explains its long-established tradition of viewing what it calls socialism as a sort of act of charity forever being obstructed by mean, unsympathetic financiers in the City.

The fake revolutionaries on the left are no better. In its pocket pamphlet No. 1, enigmatically entitled Do Wages Cause Inflation? the Socialist Workers' Party argues that "Wage rises don't cause inflation—the big companies raise prices to protect their profits". This time it's the greedy capitalist who is to blame. The pamphlet goes on to point out that the "bosses won't invest if their profits are too low". This is undoubtedly what Paul Foot, that ubiquitous guru of the SWP, had in mind when, on a Question Time TV program (22 May), he explained why the world's production potential was far from being used up. It was, he said, because of the greed of the wealthy. Apparently then, when production is held back for lack of profit it is due to greed but it is also greed which causes production to go ahead by ensuring profits through raising prices! Paul Foot would do well to heed Engels' remark:


Whoever declares that the capitalist mode of production, the "iron laws" of present-day bourgeois society, are inviolable and yet at the same time would like to abolish their unpleasant but necessary consequence has no other recourse but to deliver moral sermons to the capitalists, moral sermons whose emotional effects immediately evaporate under the influence of private interest and, if necessary, of competition (The Housing Question).

Society today is based upon the ownership and control of the means of living by a small minority. The rest of us, the workers, produce all the wealth and in doing so create a greater value than we receive back in the form of wages and salaries—the surplus value being appropriated by the owners of capital. Marx described succinctly the relationship between profits and wages:

In the language of the moralist, this means that the "less greedy" the workers are, the "more greedy" are the capitalists, and vice versa.

Moralists should take a look at history. How would they account for the period of deflation, 1921-31, when both prices and wages fell by roughly 30 per cent? Could it be that the impoverished British working class was mysteriously seized by an overpowering feeling of generosity towards the capitalists above and beyond the normal call of duty in generously providing profits for them? As any historian will know, that was an era of high militant activity and industrial unrest. And yet if you hold the view that the level of wage claims determines the general price level, what other conclusion is open to you?

Inflation is, in  fact, the consequence of government-authorised excess printing of inconvertible paper currency. Workers do not have access to the printing press but it suits governments to represent an inevitable consequence of their inflationary policies—high wage claims to maintain real living standards against a background of spiralling prices—as the cause of inflation.

Socialists have been called utopian. Utopia however simply means "no place" and only on this sense is socialism a utopia, for indeed it exists nowhere in the world at present. But while socialism is the practical fulfillment of the material interests ("greed", if you like) of the working class, the dream world that occupies the minds of politicians is incapable of realisation. The real world we all live in—even politicians—is one in which the interests of the buyers and sellers of labour power, are locked in fundamental and irreconcilable conflict and cannot be harmonised except in the distorted imagination.

Next time one of these pious paragons of virtue rises heavily from some overburdened banquet table to lecture the workers on why they ought to "tighten their belts" in these days of economic gloom, remember that.