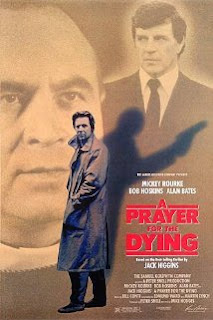 Film Review from the July 1988 issue of the Socialist Standard

A Prayer For the Dying has been disowned by both the film's director, Mike Hodges, and actor, Mickey Rourke. They have demanded that their names be removed from the credits and have embarked on a counter-publicity campaign. If this had been on the grounds that it is a lousy film, then I would have been in total sympathy with them and even have suggested that they be joined by the other two "stars" in the film - Alan Bates and Bob Hoskins. In fact they were protesting about cuts made to the film on the instructions of the producers which, they argue, had resulted in all the politics being taken out.

The film was originally intended to be a thriller scripted by Jack Higgins. Mickey Rourke was to play the part of a repentant IRA gunman on the run in England. But, while in Ireland researching his role, Rourke became enamoured of the republican cause. As a result, with the co-operation of the director, the film became a more overtly political thriller with several long monologues in favour of the IRA being written into the script. The producers objected. They removed the political speeches and cut out all the Irish scenes except the opening one - in which a bomb intended for the army blows up a school bus and leads to Rourke's subsequent soul-searching.

The result is a pig's ear of a film. It is badly acted - Alan Bates as the London funeral director-cum-gangster would have been hilarious if this was supposed to be a comedy. And who can have possibly believed that Bob Hoskins could ever be convincing as a Roman Catholic priest (albeit one who learned some useful things to do to would-be assailants while in the SAS)? The plot is totally unconvincing. The repentant Rourke in hiding in London agrees to commit just one more murder in return for a passport and passage to America. This times it's on behalf of gangster, Alan Bates. The shooting is witnessed by the priest (Hoskins) and, as a result, Rourke becomes a regular visitor to his church. Here he meets that stereotype "innocent young girl who can soften the hardest of hearts". In this case she is the blind organ-playing niece of the priest. From this point on the film degenerates from poor, if unintentional, comedy to utter farce. Not only that, it is mawkishly sentimental. It's true that there is not a lot of politics in this film, but then there's not a lot of anything else either.